You may already know that we have a beta list which receives monthly updates of our VCI-100 mapping but I would like to point out the new dedicated mapping page that is now public and can be accessed from the top of the blog. This will be the central place to get information about and download the current beta or public version of our mappings for officially supported controllers. I bring this up because the new beta version 1_7 has several cool midi functions you may want to use on your own controllers. 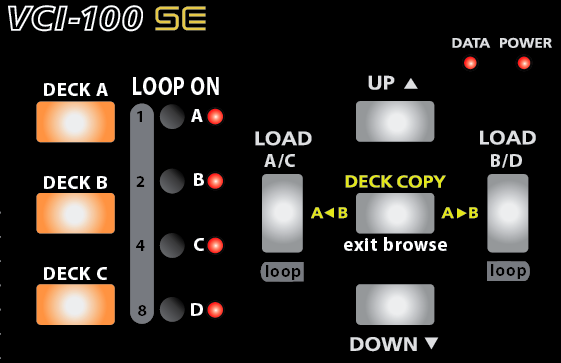 Setting a loop on the SE is easy, just click one of the 4 black buttons to set a 16 count loop. The LED will illuminate indicating that a loop is on and clicking the button again will turn it off. The 3 buttons on the left are shift buttons allowing more loop control over each deck. Holding down shift and the Load < button for example will shorten selected decks loop. You can now use shift plus the 4 small buttons to directly set specific loop lengths of 1,2,4, and 8 beats.

you may also notice that you can now exit browser mode by just pressing the middle button. Finally!

The loop buttons are accomplished through modifiers which have been covered in previous articles.  The exit browse mode is a very simple but elusive mapping trick. Just assign any button in the following manner: 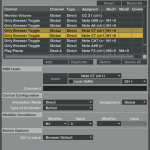 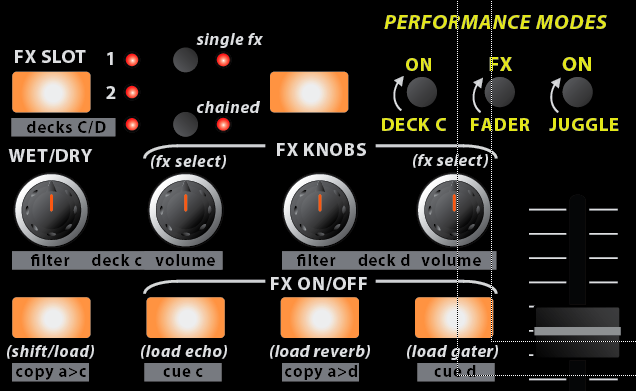 This vastly improved fx section gets a lot of control out of a small space but everything is very intuitive and easy to remember. Here are a few of the main points:

Since you no longer need to turn filters on, those buttons now engage sampler mode which is what I am using in this video demonstration. Each button, loads a beatmasher effect and starts sampling the selected deck instantly so you can record yourself juggling beats or sample a track for loop playback and effect control. These are the only buttons that are still up in the air, so if you have any ideas or suggestions for what they might become please let me know!

Get your Quantize beat Jumps on

Snap is so 2008. now Quantize is all the rage, so we killed snap and put quantize in its place. This enables quantizing your beatjumps and juggles very nicely so you cant possibly screw up a song drop. While I personally dont like to use it for performance because it quantizes to a whole count, its perfect for re-triggering the start of a song.

*Important Note* The new TSI file will only work with the latest update of Traktor Pro, which is 1.1, so make sure you are up to date and running that version. If your not, then the file wont import or may import and not show any values.

The Time-Line of a Dance Floor