Revealed earlier this month at the SIGGRAPH Conference in Vancouver, the flashy PocoPoco musical interface seems poised to bring a new level of tactile control to controllers. We reached out to one of the device’s designers, Takaharu Kanai from the IDEAA Lab team at Tokyo Metropolitan University, to get exclusive details on the device.

The PocoPoco seen in the above demo video is being used to control multiple parameters as a variation on a classic sequencer setup that you often times see with a Monome, or even a Midi Fighter, as seen in this clip. The mapping display in the video is much more powerful than a typical sequence setup – especially considering the possibilities for turning and tweaking actions to act as an aftertouch effect.

The design of the device itself looks very similar to a certain product that DJTT produces, in a four by four grid of buttons with color-changing LED’s under each of them. Being a supernaturally inquisitive bunch, we decided that we needed to know more about this device, what’s driving it, how it feels, and what the possibilities are. We got in touch with the IDEAA Lab team to find out more.

How much do you think the PocoPoco would cost to produce commercially?
The PocoPoco that we exhibited is [a] prototype, but we guess it [would] cost about 1000 dollars.

What software are the units controlling in the demo videos? Our guess here at the DJTT office is either Ableton or a MaxMSP program.
The units are controlling Logic. PocoPoco sends MIDI messages to logic, [and] in addition, we are using MaxMSP to send only the MIDI messages to synchronize each PocoPoco.

What kind of data are they sending?
They send MIDI signal to [a] PC over USB-MIDI drivers. We can assign their actions (pushing, holding, and rotating) to various functions. 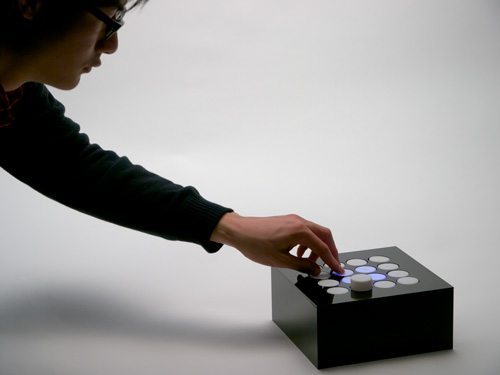 How reliable are the servos that drive the buttons up and down? Is there any concern about them failing under prolonged use?
We are using the original “solenoid actuator” instead of other motors. It can move smoothly and quickly. If we continue to pass an electrical current through the solenoid, the button is kept up. However, in this circuit design the transistor is broken by the long-term current. So, we only use the short term pop-up.

Anything else to know on how the buttons move up and down and feel?
Our units consist of “moving units” and a “base unit”. The moving units have a neodymium magnet in its bottom. The base unit has a solenoid and a aluminum pipe that goes into the moving units. Using the aluminum pipe, the motion of the moving unit is kept in uniform motion because of their magnetic properties. It feels nice!

How much power does the PocoPoco require?
It requires DC 12V powered by [an] AC adapter. It draws a max of 60 watts.

Any other technical specifications of the device that you can offer us?
Size of device : 205 × 205 × 90(W × D × H)mm
Material of chassis : ABS
External communication standard : MIDI?one INPUT and one OUTPUT

Author’s Edit: I received a few answers to some of my follow-up questions – see below:

Is the up/down state of the servos midi-controllable, or is that reactive to a different action or the LED states?
A user can control MIDI messages by pushing, catching, and turning each moving unit.
PocoPoco sends individual Control Change messages corresponding to each unit’s height and rotation. A user can assign these CC messages as he likes (volume, filter, pitch bend and etc…). In the movie of the performance at SIGGRAPH, players change the EQ  parameter by rotating the green unit in the corner.

Regarding the LED state, the white light indicates time line of the music sequencer and other color lights indicate kind of the instrument that user playing or state of device. A user can choose and change 16 instruments.

Are there any plans to move towards selling this device on a larger scale?
In the future, we would like to sell on a larger scale with more fun function. However we are at experimental stage yet, so we don’t have clear plan.
For more information on the PocoPoco, visit the official site.

Touchboard: Draw Your Next DJ Controller With Paint?