The response to my recent NI demo video featuring a live Depeche Mode remix was great, but a LOT of people asked for the demo on how it was done. The wait is over and we have an exclusive inside look video from my shoot that day. Check out the explanation above and then dig into the article for a deeper look into the details.

CORE CONCEPT 1: Jog wheels turn on and control the effects.

I first introduced this concept in 2008 on the VCI-100 SE but took it to another level with the s2’s high resolution HID connection which gave me very precise control over the range. The accuracy is so tight that I was able to get a nice pitch wobble by barely moving the wheel. Listen to the hihats at the start of the video and see if you can spot it.

Since the down press engages the Beat Masher, it allows you to reliably “grab” a part of the song and work it in or out. 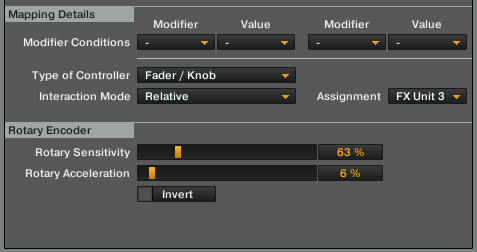 This was the first time I used this trick on a jog wheel, although it does exist in our Midi Fighter ProBeat Masher mapping. Instead of hard mapping one effect to the jog wheel rotation I used the following technique:

This means that depending on how fast you spin the wheel or how far it is thrown, many random possibilities can occur. For the drums there is less randomness built in so I can reliably play patterns of 1/4 notes or 1/16ths, but for the vocals I invited random magic to creep in. This was especially amazing in the final chorus where the vocal track gets doubled in this eerie harmony that was totally un-scripted.

In addition to turning on an effect, the jog wheel press sets the effect values to a specific musical value. For example, pressing the beat repeat wheel grabs a 1/4 repeat every time. By doing this and tuning the relative values, I can predictably find other notes and start to learn the “instrument”. With the beat repeat, using a combination of the masher and filter allows you to cut in the kick or snare creating some pretty epic fills, all perfectly in time with the track.

CORE CONCEPT 4: One shot loops timed to the master clock.

Loops are too repetitive and don’t have a nice soft ending unless you ride a fader. Lame! So, to give things a little more life I mapped my one shots to also sync to the master tempo and cut each one shot with a little trail after 16 counts. In this manner, I can re-trigger the one shot if I want them to loop or just let them play out and fade nicely to black. This work around gave me the best of both worlds- one shot sounds with loop style syncing.

Now with a solid insight into the video, watch the performance again and see if you can pick out the techniques with your ears. I will give you a hint – don’t use your eyes, because there are a lot of things happening in the mix that are not shown on camera..

Tutorial: Make Space In Your DJ Mix For New Tracks