How To Practice Finger Drumming and Controllerism

Many of you have seen plenty of videos featuring artists and DJs banging away on pads and buttons creating near perfect musical jams virtually from thin air. If you’re like a lot of finger drumming novices, you probably marvel at their incredible skills, but are disappointed when you turn around to have a jam session yourself. Today I’m sharing some secrets on becoming a finger drumming YouTube superstar – with just a little daily practice and some good techniques. Read on to learn more!

If you want to get a soundpack like the one used in this tutorial delivered to your inbox in a few days alongside a new one to practice and play with for free each week, just sign up for the DJ TechTools Weekly Newsletter!

Can’t get the song stuck out of your head? DOWNLOAD it for FREE right here!

There are a lot of different schools of thought and approaches to finger drumming, and I don’t think there has to be a definitive “right way” to do it. It’s a bit like martial arts, in that it has many different teachers, styles, and ideologies. I studied under Master Quan in the Hubei Province. You might be wondering:

What is Finger Drumming, and is it really worth the effort?

First and foremost, it’s insanely fun. The fusion of electronic music’s sonic power with live instrumentation gives me a rush unparalleled by anything else. That aside, it is an incredible tool for composing expressive songs quickly and/or for jamming with your friends. It’s also a fast way to become a internet video sensation. The basic concept is to turn electronic music into a living, breathing instrument and be able to morph and compose your beats on the fly – without having to get lost in the slow translation of  programming.

Before computers, people just played instruments. While there’s certainly some genuinely amazing things about electronic music, it has a tendency to lack that “human element.” As a result, we risk losing touch with what makes music special in the first place. By creating and practicing real musicianship with electronic sounds, we can begin to regain the “soul connection.”

That said, I have developed a finger drumming technique I call “Musiago” – which is a word I made up. When translated from Madzachish, it means “many branches” – as in finger branches on a wrist trunk. Admittedly, this technique has been developed on and is assisted by the Midi Fighter, which is uniquely armed with tight button spacing and spring-loaded trigger buttons which enable faster, more efficient playing. 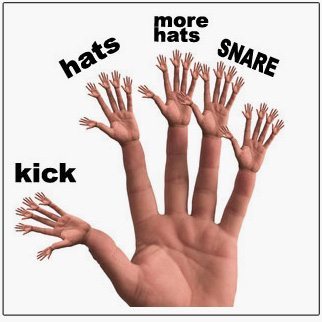 At the core of the Musiago technique is the concept of finger isolation. You have to start thinking of yourself as 10-armed super drumming soul robot!

I use my thumb for the kick, 1st and 2nd fingers for hats, and ring finger for snare. I chose these fingers for their relative dexterity: my thumb is solid, tireless, and funky whereas my first 2 fingers are technical and expressive. And the ring finger holds a nice balance with the thumb, perfect for rocking back and forth. My pinky is pretty useless – I don’t use it that much currently.

This method is centered around playing the beat with the right hand so you can layer in bass, one shots, and more with the left. If you are left handed, you might consider inverting my fingerings.

One of the most important things to take into consideration when practicing is making sure you know which sound is where and that your chosen layout format works for your own personal technique and style. 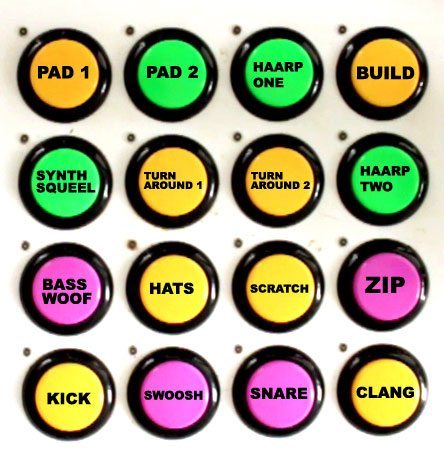 Most of the Mad Zach packs follow a familiar layout that I personally find to work really well – and for this pack, I’ve created the above helpful little diagram for you to use to make sure you know what sound is where. If you think it might help to have a physical copy, print one out!

If you want to get a new soundpack like the one used in this video to practice and play with each week for free, just sign up for the DJ TechTools Weekly Newsletter!

Can’t get the song stuck out of your head? DOWNLOAD IT FOR FREE HERE!

Got your own style of finger drumming? Show us! Maybe it’ll be so incredible we’ll want to feature your sweet style on the blog. Respond to the video with one showing off your strategy, techniques and skills.

We’d also love to see what you do with the pack, so consider filming a video of you playing with it and upload for a chance to pick the name/theme of the next weekly soundpack from Mad Zach. How to make sure we see it: post about it on Twitter – mention @madzach1 and @djtechtools!

Mad Zach is a maverick controllerist and producer, focused on bridging the gap between production and performance.

How To Sample Vinyl Records To Build A Soundpack

Turn A Song Into A Live Remix Performance In Ableton +…