Small-time developers making unique utility apps for DJs often come up with some of the best ideas and most useful tools. Today we’re featuring DJ Conversion Utility – which enables DJs to move cue points, loops, key data, beatgrids, and more between a few prominent apps. If you’ve used Traktor for a while and want to try something new, this makes the switch easier to stomach.

Designed and coded in the Netherlands by DJ MixMasterG, DJ Conversion Utility (DJCU) was born out of necessity – because until he took a pass at it, there was no way to easily move DJ metadata into Algoriddim’s djay and djay Pro. In a recent email update announcing the latest version and a new design, the full back story is shared:

We developed the djay Conversion Utility because we wanted to use cues set in Traktor Pro in djay about 6 months ago. The idea was just for in house usage, we never intended to go public with it. But when we spoke about it with other DJ’s it became clear that more people needed this functionality.
As such we released what we used in house under the name djay Conversion Utility. Just because we could, we introduced conversion from Traktor Pro to Rekordbox as well as other options while the utility evolved.

And then.. things went a little nuts. It turned out that hundreds of people needed the Traktor Pro to Rekordbox conversion. We never realized that. So we expanded options, de-bugged the utility you know the drill. The early adopters might recall december 31st 2016 when we released no less then 4 updates within 12 hours. Just to make sure that everyone could prep their gigs for NewYears eve.

So the core functionality is pretty simple: DJCU is able to transfer metadata (cues, loops, beatgrid, key info) between DJ applications in a few different ways:

We’re still waiting for even more cross-compatibility, but it starts to become a challenge based on how the databases are built for each software, and how well-hidden the actual metadata is. These types of utilities are often the product of hundreds of hours of hackery and reverse engineering – not an easy task. 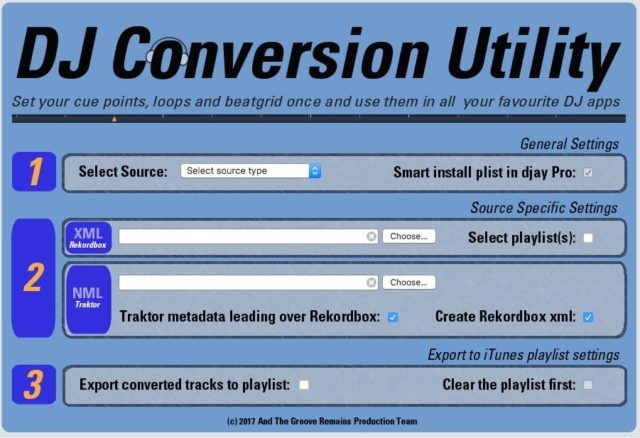 The DJCU software (Mac-only, for now) is very simple in interface, and while there’s still a bit of work to be done on the UI, it certainly doesn’t need much more for now. It would be great to see an even more clear process in the app – clearly showing what it’s converting FROM and TO every time you use it.

The DJ Conversion Utility app is available here for $6.95 – and if you found this useful, it’s worth noting that the developer also has built a tool that allows you to quickly verify that all tracks in your Traktor Pro collection have a Camelot key associated with them. It’s called Traktor Tag Sync Utility – handy!

Editor’s note: Please always be sure to back up your music collection and DJ software library before using any type of mass-conversion tools like this. While we haven’t personally experienced any issues, it’s always better to be safe than sorry.

Yes, but not with djay. Next Audio Lab’s Rekord Buddy 2 was launched last year, and it’s able to handle a number of conversions between Serato, Rekordbox, and Traktor Pro. They’re all kept synced using a central database – which is a bit different that how this single-shot tool works. Maybe these two apps should collaborate – although Rekord Buddy 2 is $59.99 versus DJCU which is just $6.95

Have an invaluable tool that you use to manage your DJ music library? Let us know in the comments below.