Mixvibes is releasing an enhanced update to Remixlive for iOS devices. This update reinvents the app with a dedicated 4×4 grid for finger-drumming as well as total design overhaul. Remixlive 3.0 claims to be easier to use and more intuitive for iOS musical endeavors. Read more below to find out the new features and how they work.

What is probably the most attractive feature in the latest Remixlive update for iOS is the ability to sequence patterns directly into the Loop grid. In the video above, we notice the musician starts to lay down a beat at 0:28 and the loop recorder catches it all, sequencing the play back as he builds his beat. This type of functionality is usually seen in controllers that cost over $100 and it is all baked into the new software update. 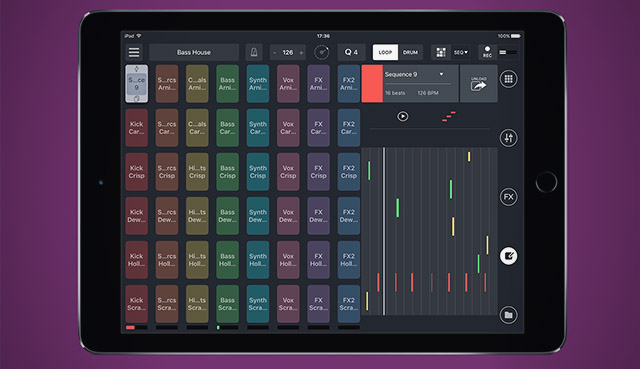 Mixvibes also took time to completely overhaul the UI to improve users’ workflow within Remixlive 3.0. For instance, each pad can be routed to a specific mixer line and then displays an associated color. The mixer features the standard EQs, volume, filters, and Mute/Solo controls on each channel. Performers can also finely tune samples in the sample editor which has controls for gain, pan, ADSR, transpose, and reverse to name a handful. Producers can also record sounds through the iOS devices external mic. Then share the audio between apps using Inter-App and Audiobus.

Remixlive is also compatible with Ableton Link which allows the app to be a part of a robust Live setup. Traditional tempo controls are available as well as synced FX (Delay, Filter, Flanger, Reverb, etc.) and beat repeat pads from 1/16th to 2 bars.

Remixlive 3.0 for iOS devices unlocks the potential for a lot of creativity and performance abilities. The app is free with in-app purchases and the Full Feature Pack is available for ~$12 USD.

Check out Remixlive 3.0 on the Apple App Store.