Rekordbox 5: Is It Faster? Better? Stronger?

Last week, Pioneer DJ put out a new version of their library management and DJ software, Rekordbox 5. For many DJs, this software is the central hub that bridges the gap between music collection and DJ collection. How does the new version perform? Keep reading for our experience so far and to share your own thoughts.

The New Look: Clean and Clear

The most obvious change in the new version of Rekordbox 5.0 is an overhaul to the user interface. It’s darker, flatter, and feels like it uses space more efficiently. We love that Pioneer DJ is continuing to iterate and develop the front end of the program to be intuitive and natural.

A move to deeper blacks and darker blues across the entire software makes it feel less like a utility and more like a DJ software. We’ve seen several online commentaries draw comparisons to Serato DJ, which also has these same dark colors and some similar design choices. It doesn’t matter where the design is inspired by – it’s clearly better than it was in 4.5, and continuing to improve.

By default, the text sizes in the new version are very small – open up preferences and increase them under View > Browse > FontSize/Line Space to fix it quickly. This only adjusts the Browse display – we can’t find a way to change the size of the fonts in the decks, which have all been slightly shrunken.

For some reason, one of the few things that has never evolved about Rekordbox is the unclear, confusing preferences screen. Despite a visual refresh to every other part of the software, tapping the gear icon still opens a preferences screen that’s a UX designer’s nightmare. One might be able to argue that it’s not broken, and many users might be used to it – but despite being a nearly daily Rekordbox user, I still find myself clicking through every tab in confusion with regularity.

With Rekordbox 5, Pioneer DJ has a mystical-sounding new KORETECH engine powering the software, which is being boasted as their “most stable and responsive software to date”. The new version does feel really snappy – loading tracks into decks, shifting and syncing keys, browsing the library – all are quick and smooth.

It’s been a number of versions (excluding Betas) since I’ve experienced a complete crash major issue with Rekordbox, so in terms of stability, it doesn’t feel like much has changed. There have been some reports of the new version being a CPU hog on the performance side of the software, but we haven’t experienced that in our testing yet. Anytime any new software comes out, it might take a few versions to iron out any memory leaks and bugs. If you’re relying on the Performance mode, we recommend extensive testing on your own computer/gear setup before relying on it for a major gig.

The Export (Library Management) Side

When analyzing tracks, the part that seems to take the longest is the waveform creation. Tracks would get to 99% finished analyzing and then stick – only completing their analysis 15-20 seconds later with a completed waveform. This was also the case in older versions of Rekordbox, so it’s not a huge change.

In the new version of Rekordbox, the way that tracks are analyzed by default has changed. Users might notice a slight slowdown in how long analysis takes. We reached out to Pioneer DJ to find out more, and it sounds like track analysis has even more lumped into it by default:

“Music structure analysis” would indicate that Rekordbox is trying to do a better job at detecting the phrasing of songs. In practice, this might mean better placement of beatgrid downbeats, and less accidental grid drops over drum-free track intros (In the past, I’ve often had to adjust beatgrids on tracks without a drum track in the start of a song).

Almost every house and techno song I analyzed was spot on in terms of beatgrid and downbeat analysis. I still noticed occasional songs that had issues – particularly when I switched into faster genres like my liquid drum and bass playlists. Note the above screenshot of a 175 BPM where the downbeat (“the one”) is completely off. This is very common with DJ software, but I was hoping that this new analysis would have less issues with obvious mistakes.

What about key analysis accuracy? We’re wondering this too. Look out for a brand new edition of the DJTT key analysis showdown in about a month!

Pioneer DJ added new functionality designed to restore lost DJ collections using Rekordbox formatted USB drives. It’s pretty amazing – and I have at least one DJ friend who is ecstatic to finally have a way to get all his music and playlists back onto his new computer.

You can import entire folders – including every single playlist and track – from USB drives. If you already have tracks in your library present in the import, Rekordbox presents a useful warning action screen: 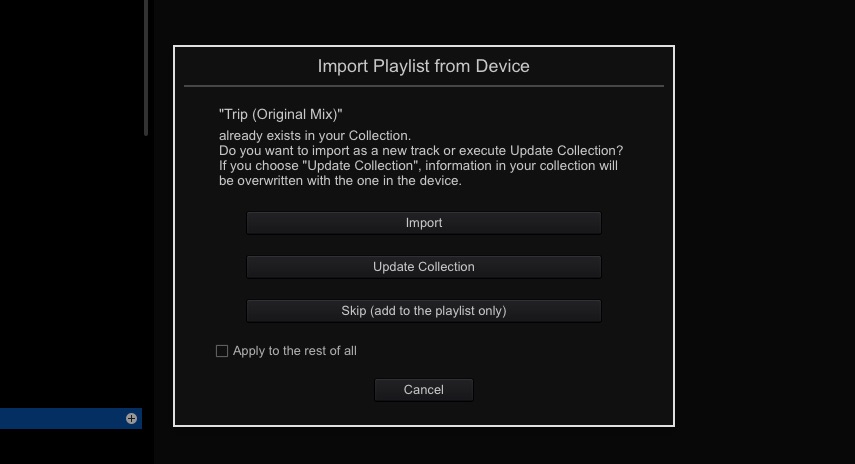 We can see two potential “moral” issues that some DJs might have with this new feature:

The Performance (Rekordbox DJ) Side

The whole other half of Rekordbox is the Performance side. If you’ve been living under a rock, this is Pioneer DJ’s entry into the DJ software game. With this new 5.0 update, a few features were introduced to improve the experience for DJs.

There’s a new performance pad mode in the dropdown for each deck called “Keyboard”. This allows DJs to play cuepoints across an entire octave in either direction – which is ideal for those users who love a good toneplay routine. Here’s one enthusiastic user review of the feature from Reddit’s /r/DJs.

How often DJs will take advantage of this function really depends on how routine-focused they are. If your tracks are covered with cue points and you love trying to make tone play mixes, it will be invaluable. If you never juggle cue points, Keyboard mode will likely never be used.

We wrote about this new feature when the beta was first announced – being able to adjust the key of a track without adjusting the BPM. Rekordbox joins Serato DJ and Virtual DJ in being able to detect the key of the master track and sync the incoming track’s pitch to that same key. This means that even if two songs are not harmonically compatible, DJs are able to hit Key Sync and get a pretty acceptable result.

In my experience, Key Sync seemed to work very well. It would be fantastic to see the same functionality added to XDJs and CDJs if they have a powerful enough audio engine onboard to accomplish it without destroying the sound quality.

Easily one of the best improvements in this new Rekordbox DJ update is allowing anyone with a Rekordbox USB or SD card to walk up to your computer, plug in their drive, and instantly access their entire collection just like they would on a CDJ. This was a no-brainer addition. It’s a great way to convince CDJ users to give Rekordbox DJ a shot when they’re near a controller setup. It works without any issues in our testing.

Against The Other DJ Softwares

Pioneer DJ’s software continues to flatten the playing field and stoke the fires of competition in the DJ software arena. While Serato DJ has had many of these features already, Traktor users might continue to be looking over at these new Rekordbox updates with envy. If Native Instruments wants to continue to compete and have a modern-feeling solutions for DJs, they’ll need to act fast or be left in the dust.

Review: Pioneer DJ’s new Rekordbox 6 – is it worth subscribing?