I remember trying my first pair of electronic drums – a very expensive TD-50KV set up in major music retailer. This kit, for those who haven’t tried it, is irresistibly satisfying. The butter-soft recoil of Roland’s mesh heads and the wide sample library opens you to an alternative playing experience.

like extremely precise MIDI-mapping, only for drums instead of buttons

I felt similarly after going to a demo of Sensory Percussion, a system of drum triggers for various percussive setups. The company has been around for about a year, but we wanted to feature it on the DJTT blog because it’s a unique and expressive performance tool. Think of it like extremely precise MIDI-mapping, only for drums instead of buttons.

How Does The Sensory Percussion System Work?

MIDI triggers for drums are certainly not a new concept, but Sensory Percussion’s over engineered triggers unlock some pretty incredible potential for both studio and live environments. 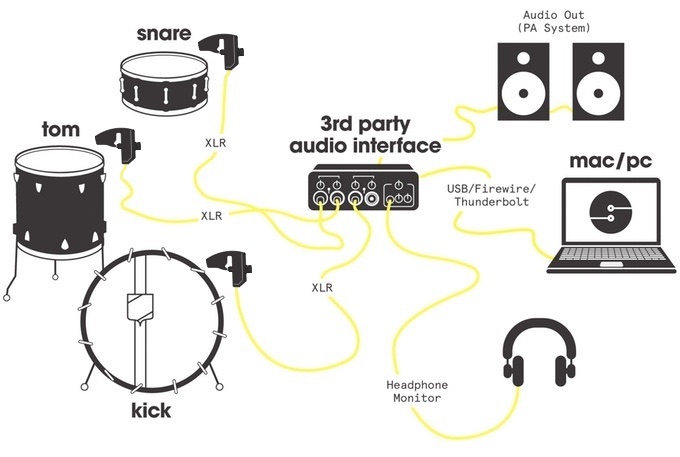 One stand out feature is the ability for triggers to split up individual drum heads into multiple regions. This allows you to use a snare drum to control as many as 10 samples at once, depending on where you hit it. Not only that, but effect parameters can also be programming to react to your playing.

For instance, let’s say you want a rim shot at the bottom of the head to trigger a delay effect on the snare sample. Not only can you isolate that region and style of hit to trigger that sample, but you can also modify the intensity of the delay or time based on how hard you hit it.

Ultimately, these sensors give you a set of expressive tools to turn your drum kit into a MIDI controller that simply blends in with your playing. It’s fairly simple to set up, using XLRs (instead of MIDI) routed to a standard interface.

This functionality unfortunately comes at a steep price.

How I Play: Mr Bill + KJ Sawka, The Future Of Live Controllerism?