Editorials and OpinionsScience of DJing

Every week, we hear from DJs who want to know “Is a new version of Traktor coming out soon?” Besides minor bug fixes, it’s been a while since a major update. We don’t know what Native Instruments is developing, but we have a very good clue at what could be next from NI based on their sponsorship of a scientific community project. It’s called SiSEC – Signal Separation Evaluation Campaign. One of goals of this project is to divide completed audio tracks back into stem tracks using just a computer algorithm.

Edtior’s Note: This article is not based on any advance knowledge of future NI products. We actually found out about SiSEC from a DJTT user, Faro, who commented on our article about PhonicMind.

The Signal Separation Evaluation Campaign is a community project all about splitting up signals into the elements that make them up. This is called source separation – dividing a fully mixed signal back into the original components. It’s not just about music – SiSEC has also taken a shot at diving up at asynchronous speech from different microphones, speech vs background noise and biomedical signals (ie: heart rate vs other internal noises).

The basic structure of the Campaign is that teams (usually based at universities, but private audio labs also enter) are given a data set. They then write an algorithm – or improve an existing one – to divide these tracks into their respective parts.

The algorithms then are scored based on how well they split the tracks – because the data set also includes real stems for each track. These are real songs, and the competition only chosen tracks that have the stems freely available.

What Does This Have To Do With Traktor?

The SiSEC happened in 2015 and 2016, but this year, something’s a bit different about the campaign. Not only is there the above prominent sponsorship message on their homepage, but the MUS (music) component of SiSEC is all focused around Stem files, as noted on that subpage:

Songs are encoded in the Native Instruments stems format, with a tool to convert them back and forth to wav and to load them directly in Python.

Native Instruments has a lot of vested interest in this topic – after all, they built an entire ecosystem around Stems. But the most common complain about Stems is a lack of content. There’s a decent amount of Stem releases, but what DJ is going to rebuy their library of tracks in a new format?

If we had to bet, Native Instruments will be watching the results of SiSEC 2018 very closely, and incorporating/licensing the winning algorithms into a future version of Traktor.

How Good Are These Algorithms?

Want to hear how the 20+ algorithms that entered in the 2016 competition did? Listen for yourself on this page – you can quickly jump through the results by clicking on the individual squares on the chart, and then solo each track in the player that appears. The coloration on the page (shown below) gives you a sense of how each algorithm performed versus the real stem files.

It’s clear from the results that these algorithms have a lot of work to become performance ready tools – and have seriously varying results depending on the song and genre. Still – clicking through some of the top algorithm results and it’s clear that SiSEC is a promising project that will be of huge importance to music curators and DJs.

What’s The Timeline for SiSEC This Year?

The campaign is currently in process, and there’s an April 1st deadline for results to be submitted to the campaign. According to the official timeline, he publication of separation results is expected to be on Apr 8th 2018. There’s then a conference in June to present the results and associated papers – read more here.

Epilogue: Is Traktor Actively Being Worked On?

In the last few months, several commenters on our site and others have made the argument that the DJ software is on a course to be completely abandoned by Native Instruments. As we’ve mentioned before, NI has clearly been on the job search for new director of DJ products (or similar) for a while – but that job has recently disappeared from their Careers page.

More importantly, there’s a promising emerging pattern of development. With the two most recent (albeit tiny) updates in the last 60 days, NI broke a year-plus silence on new versions of Traktor Pro 2. Take a look at the chart I made for every release since Traktor Pro 2.5: 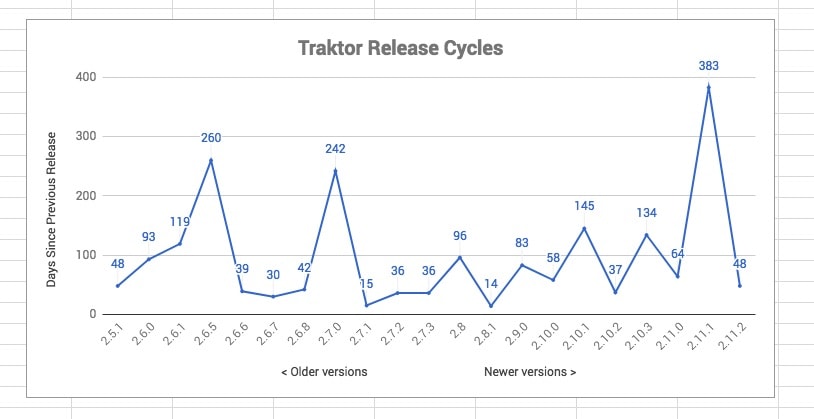 So it’s not hard to imagine a future in which Native Instruments puts out Traktor Pro 3 and incorporates signal separation to a track deck. This could bring tons of new life into Stems and to the Traktor software and hardware platforms.

Would you DJ using a signal separation algorithm built into your setup? Share your thoughts in the comments below.

2 Years In: What Will It Take For Stems To Go Mainstream?

Traktor + Serato DJs Locked Out Of DVS On DJM-900NXS2?