Spinning DJ Gear Is Back – Are Motorized Jogwheels What DJs Really Want?

After last week’s surprise sudden announcement of the Denon DJ SC5000 getting a motorized upgrade, one thing is clear: InMusic (parent company of Denon DJ and Rane) thinks that DJs want motorized platters on their gear. But is that what DJs really want? Will people buy spinning platters in 2018? We take a closer look at this emerging trend in today’s article.

What’s Out, What’s On The Horizon

It sure seemed like the era of spinning platters was over for Denon DJ when it was acquired by InMusic and many of the older products and designs were cast aside. But InMusic is doubling down on motorized gear, with the Rane Twelve control surface having launched earlier this year, and the new SC5000M announced last week.

Numark (also an InMusic brand) has had a significant history of spinning platters. The multiple NS7 releases have made it clear that there’s very much a demand for spinning gear in the Serato DJ world.

Other companies in the industry may be following suit soon – we’re not allowed to say more just yet!

Spinning Platters By The Numbers

Sales numbers for DJ gear broken down by motorized/nonmotorized gear are hard to come by, but one thing is obvious: the top-selling DJ gear right now is not gear that has spinning platters on it. Sure, there’s a large turntable-loving crowd in our industry, but if you’re making a business decision like “let’s release two major products in 2018 that have motorized jogwheels”, there must be a reason based on real numbers, right?

Based on our own (very unscientific) market research, it seems like DJs actually do want motorized controllers/jogwheels! We thought it would be fun to make polls on Facebook and Twitter, and at the time of publication, here were the results when we asked:

“If your favorite DJ gear came in two versions: one with a motorized jog wheel, one not, what would you use?” 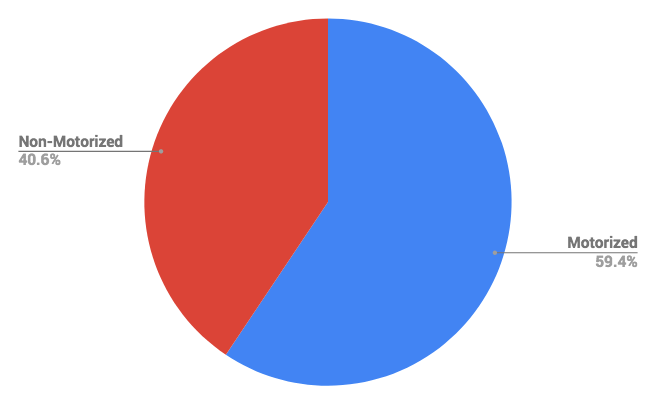 If your favorite DJ gear came in two versions: one with a motorized jog wheel, one not, what would you use?

Selling To A Perception

Spinning platters have always been connected to DJing in mainstream culture – so to the uninformed, digital DJ gear without a spinning piece of vinyl can seem “less real”. Speaking from my own mobile DJ experience, if you have a spinning piece of gear (control vinyl, real vinyl, or spinning jogs), it’s way more likely a random crowd member will come up and ask to touch the gear. They’ll probably even say everyone’s favorite scratching sound – “wikka wikka” – out loud as they ask it.

So how does the above translate to a business decision? It’s about selling to people who aren’t DJs. Aspiring DJs, parents, and other people who are in the market for DJ gear but don’t know what to buy will probably the gear that spins because it looks more like “real DJ gear”.

It’s also undeniable that vinyl and scratching is having a bit of a revitalization, with the portablism scene particularly having exploded in the last two years. People like to cut and play on a tactile moving surface – and that’s exactly what InMusic is banking on with these releases.

Who do you think will jump on the spinning platter / motorized gear bandwagon next?
Leave your speculation / dreams / photoshop mockups in the comments below.

jogwheelmotorized controllerrane 12sc5000M
551
Comments
Get DJTT love in your inbox
Drop your email address here, we'll send you news, tutorials, and special offers once a week.
Unsubscribe at any time. we won't sell your data, ever.