When it comes to speakers, DJs love to spin on boomin’ systems, but when you produce music or record DJ sets for distribution, it helps to have a pair of reference monitors that put out the exact sound that your audio puts in. The Kali Audio LP-6 emits an accurate and uncolored, unboosted sound, so you can evaluate your audio mix with an unbiased perspective. If you’re looking to buy studio monitors, the fresh-on-the-scene Kali Audio products are worth checking out.

In this review, contributing writer Markkus Rovito evaluates the LP-6’s results and compares them to the popular KRK Rokit 6 G3 studio monitors.

DJs are a highly sought-after customer in the world of production equipment, because DJs who either haven’t started making their own music or are just getting started are some of the best candidates for purchasing production software, synthesizers, and all kinds of other gear – even studio monitors.

A DJ of any experience level probably has some type of home/practice space speakers. But when it comes to producing music, or even to recording DJ sets for distribution, it helps to use speakers that reproduce the source material with the greatest transparency, in other words, with the least amount of coloration or boosting and/or cutting of any part of the frequency range.

DJs often like to practice on speakers that are bass heavy or in other ways give them the sound they prefer for a performance. And owning such speakers also makes it easier to throw together a sound system for a quick house party or event.

However, for music recorded for distribution, the new Kali Audio LP-6 near-field monitors focus on the goal of producing an accurate account of your audio material. This clarity helps when mixing original music or DJ sets that will be played back on a wide variety of other systems – from a booming club system to a mediocre smartphone speaker.

Kali Audio also adds eight Boundary EQ settings to the monitor’s back panel. These settings adjust the speaker’s output signal according to the way the LP-6 speakers are physically placed in a room. It all adds up to outstanding results at a price that compares extremely well against some of the LP-6’s most popular competition. (Read on for a comparison versus KRK’s Rokit 6.) 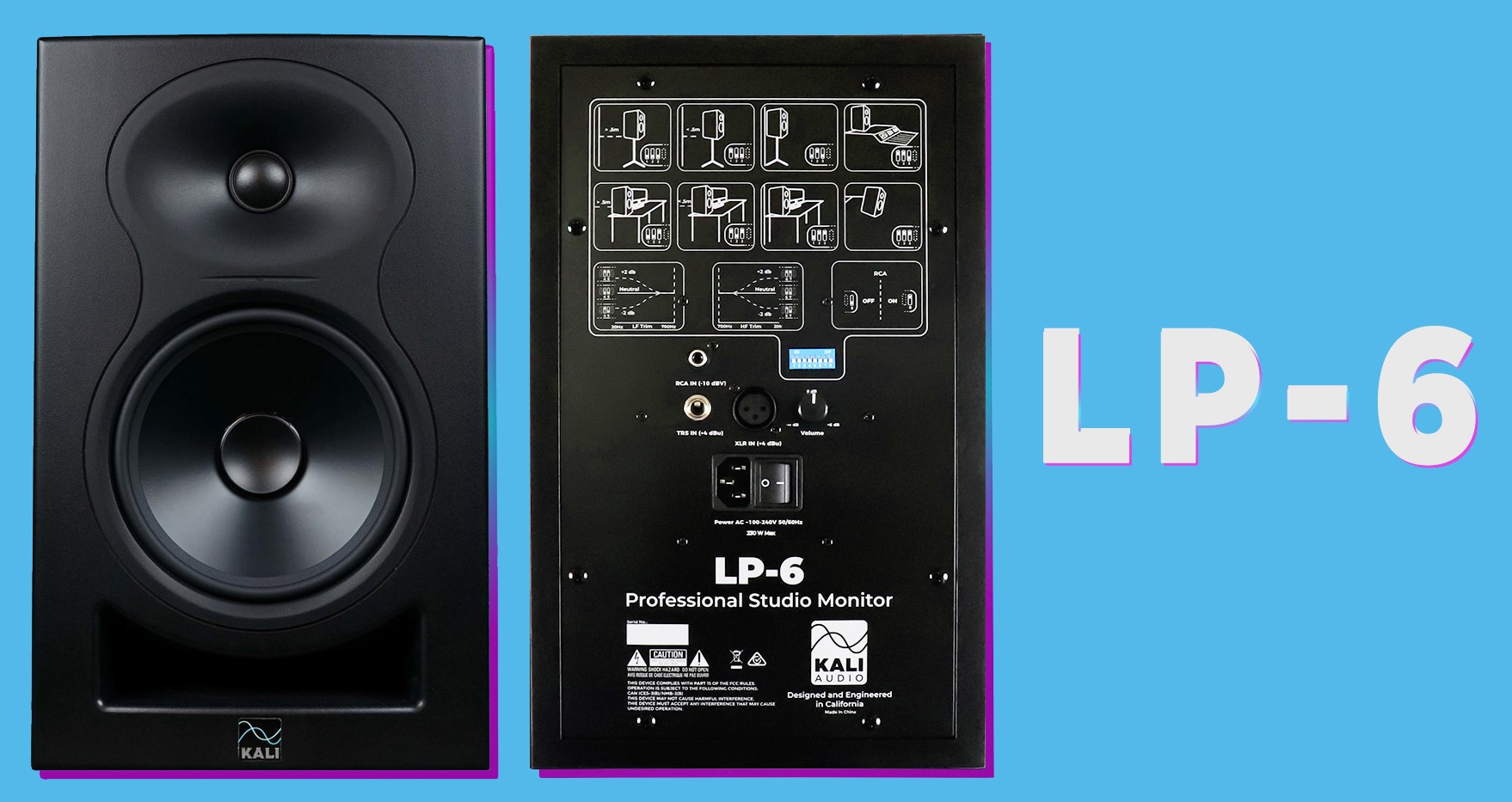 Kali Audio designed the front-side port tube beneath the woofer to push all the woofer’s air out at the same velocity across the whole tube in order to reduce the “chuffing” that can add noise and interfere with low-end detail.

Three audio inputs on the back side include balanced XLR and 1/4-inch TRS inputs, as well as unbalanced RCA input. The power switch emits a blue LED on the front when turned on.

Also on the back, eight dip switches set the eight Boundary EQ settings, as well as the low-frequency and high-frequency trim/boost settings. Diagrams on the back side plate show you how to position the switches for each setting.

Because the physical objects and surfaces surrounding a speaker will affect its frequency response, Kali Audio programmed the LP-6 with eight Boundary EQ settings to compensate for the predictable effects on the frequency response that result from the eight most commonly used speaker positions.

By default, the LP-6 is setup for speakers that are in the ideal position: on stands and 20 inches or more away from any walls. People in small studios don’t always have the luxury of placing their monitors in such a way, so the LP-6 also has settings for when the speakers are on stands closer to a wall; on stands against (but not touching) a wall; on a desk away from, closer to, or against a wall; on top of a large mixing console or meter bridge; and wall mounted. (You need a plate adapter from Kali Audio to wall mount the LP-6.)

The LP-6 is in its truest and most intended form when in the ideal position on speaker stands away from any walls, but the other Boundary EQ settings do a suitable job of compensating its frequency response for accurate performance in the other positions, and that’s a big help for a large percentage of people working in small studios, converted bedrooms or basements, etc.

Also by default, the LP-6 does not boost or cut any frequencies, but the dip switches allow for a slight ±2 dB boosting or cutting of both the low and/or high frequencies, which you can set as a matter of personal taste or in combination with the Boundary EQs to get your preferred sound.

Finally, the eighth dip switch activates the RCA input, which is disabled by default to prevent any interference from the input when it’s unused. 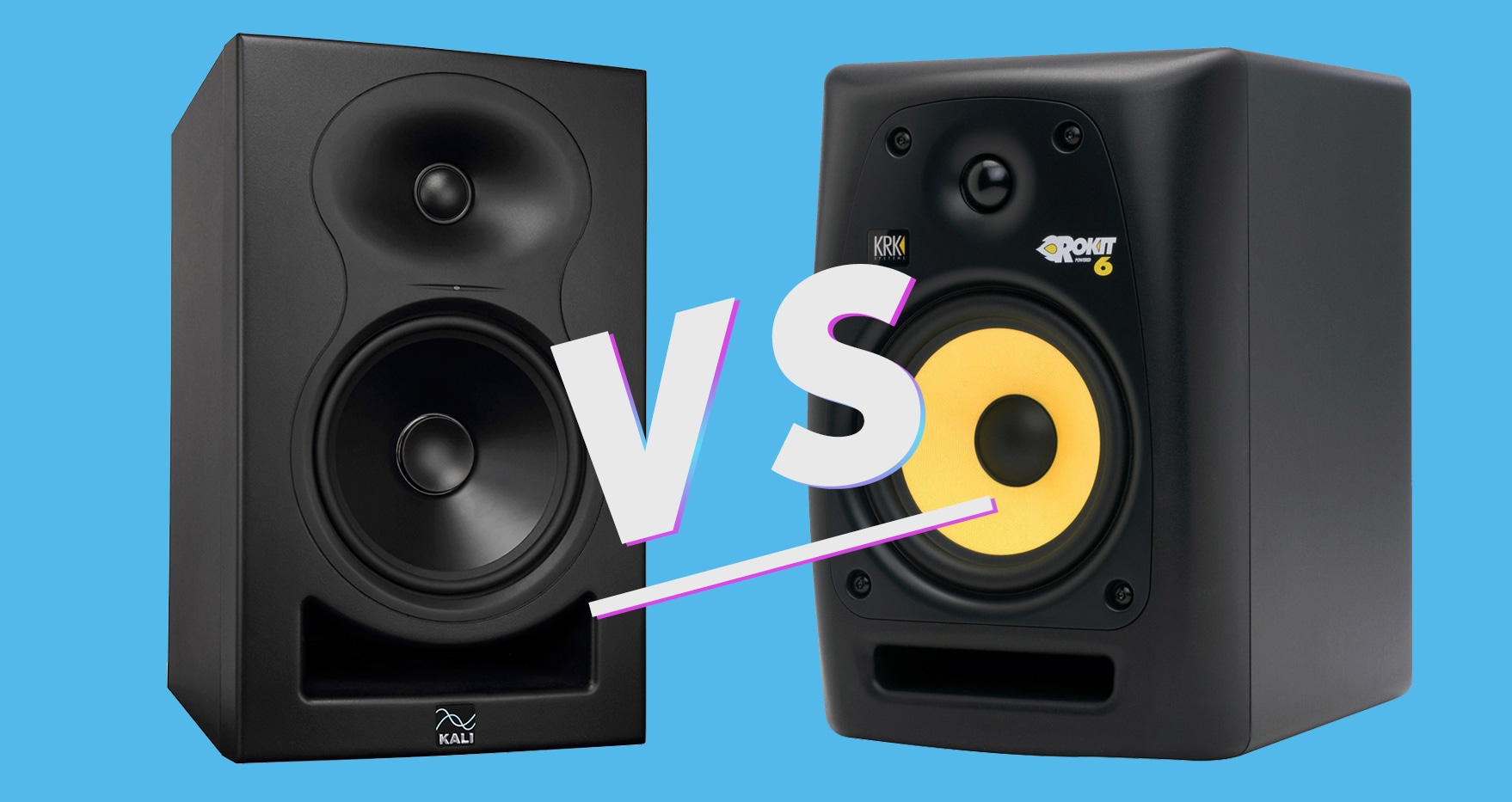 Writing about how a speaker sounds can become a bit esoteric, so while testing a pair of LP-6 monitors, I mainly compared them against a well-known commodity in the DJ and music production spaces: the KRK Rokit Powered 6, aka the Rokit 6 G3. Recognizable for its yellow cones, the Rokit 6 has justifiably become somewhat of an industry standard for its solid results at an affordable price of $199 each.

it has a very engaging, animated sound. It sounds alive, whereas there is a twinge of dullness to the Rokit 6

Even before comparing them to the Rokit 6, I immediately noted the LP-6’s very clear, bright sound with excellent detail and satisfying texture.

I’m Goin’ Back to Kali

Sometimes hearing new speakers is like tasting a great new wine or whiskey: You didn’t know what you were missing, because you thought that what you were used to was good. The truth is, what you were used to probably was pretty good, but there was another level. However, with good booze, the price almost inevitably goes up with better quality. With the LP-6 monitors, we’re still fortunate to be experiencing the ongoing trend of better quality electronics coming out at lower prices.

The crisp, even transparency of the LP-6’s sound rarely if ever comes at a price this low- $149 each. And its eight Boundary EQ settings address a desperate need for many budget-minded producer/DJs, who often don’t have the luxury of studio space for optimal monitor placement.

the LP-6 speakers make for an excellent reference monitor system when you need a true, balanced representation of the music

Plenty of electronic music producers have put out great records using tinny, low-end multi-media speakers, bass-heavy monitors, or just headphones for mixing. So don’t be discouraged from making your music regardless of your current set up. However, if you have the means and desire, the LP-6 speakers make for an excellent reference monitor system when you need a true, balanced representation of the music you are making or mixing, so you can arrive at a sound that will translate as well as possible to all the potential systems your listeners will be using.

The LP-6, or the LP-8 coming out later in 2018, should also serve very well as a secondary reference system for producers who try to replicate the sound and feel of a club environment using big, high-end monitors for their primary system.