In a previous article on DJTT, we introduced blockchain and why we believe it may disrupt the music business. Experts and futurists like Mat Dryhurst believe that the technology could dramatically change the game for DJs, producers, and musicians worldwide. Several innovative blockchain startups have surfaced with great promises to help DJs, music publishing houses, and fans to connect, and even to generate alternative forms of revenues.

The blockchain technology – famous for being the building blocks of cryptocurrency Bitcoin – will touch most areas of the USD 17 billion music industry, from streaming to performances to royalty management to live performances. For example, royalties management has been for long an issue in the industry. Some blockchain projects offer solutions to send the right payouts to musicians and technical production staff  – and even to compensate listeners.

So which blockchain solutions can help DJs and producers tomorrow?

Before we deep dig into this topic, remember: blockchain projects are still in their infancy, but have a huge potential of disruption. To understand the level of disruption, imagine what it was like when Facebook first arrived, over a decade ago. It’s perhaps more appropriate to call the music projects in this article “blockchain ecosystems”, as they develop innovative solutions to the music industry’s current pitfalls.

Born in California, Inmusik is a streaming platform that has the ambition to provide fans, record producers, and publishing houses with an alternative to the major streaming services. Based on a pioneering blockchain platform, Inmusik provides DJs and producers the possibility to generate extra revenue coming from “Token Votes”. This is a system that invites fans to “vote” on songs they love, enabling producers to earn additional payouts beyond the traditional streaming revenues they earn from services like Spotify. “Token Votes” come from the “Community Pool” which incentivizes music lovers to buy a stake in tracks, similar to a traditional investment.

The idea behind the Inmusik model is this: Fans inject money directly into the artists they believe would rank high with no intermediary (unlike Spotify or any other streaming platform that controls revenue distribution). Payouts are directly sent out to musicians, thanks to smart contracts. Inmusik breaks the old paradigms and distribution channels that clutter the music business. It’s the first time a new blockchain-based solution has provided such a model in the music business whose sole purpose is to inject cash out into the hands of content creators (i.e. music producers) and music lovers.

“Can I join Inmusik now and get my streams paid out to me if I’m a producer?” 18,000 artists are already signed up to Inmusik, and producers can freely join.

Musicoin: Bridging the gap between mixes and streaming

Musicoin is a popular blockchain-based streaming solution that recently launched Musicoin DJ, that features blockchain-centered DJ mixes. Currently, record producers don’t receive much of the compensation they are owed when their music is played out at venues, clubs, or festivals. It’s excellent for promotion, but in terms of copyrights, we are doing things wrong there. Musicoin DJ traces every track played out and can send out the right payout to producers whose tracks are played.

To understand how this works, take the first example mix – called “Rock The Blockchain”- which was released by DJ Deadly Buda last August. It’s a mix that has 15 tracks in it, all of which are paid instantly when the mix is played – thanks to smart contracts that all are integrated and attached to the mix. Read more about the mix’s release here.

“But is the Musicoin platform popular enough support my visibility as a DJ?” Like many blockchain projects still in infancy but already reached popularity, Musicoin DJ has developed a platform to launch DJ mixes on blockchain. A Reddit thread further mentions Musicoin has 35,000 verified users earlier this year. That said, we do wonder if this tech would be better integrated within a larger ecosystem that’s already actively negotiating contracts with hundreds of thousands of prominent artists – like how Proton is tackling mix uploading onto Spotify and Apple Music.

Another forward-thinking blockchain initiative is Utopia, which aims at decluttering the admin that can be troublesome or boring for most artists. Most of the time, these unknown admin tasks are necessary to keep track of royalties payments, which are managed through smart contracts on Utopia. With Utopia, artists, publishing houses, and record labels can save huge amount of time and record all data recorded through the smart contracts, including all active contributors to a song. The smart contracts then enable companies to send back money to the right copyholders, ensuring everyone gets the fair amount they deserve.

Unlike Inmusik, which is community-focused and rewards active participation, Utopia is dedicated to music data, and aims to soon launch some more features that will help artists manage their bookings logistics – such as flights and hotels.

Rave culture is also moving to blockchain, and Wired recently coined the term “Crypto Raves” in reference to the phenomenon.

So what the heck is a “crypto rave?” Back in the early days, word of mouth was used to attend illicit raves around the world. Today, with the emergence of blockchain, raves are back the way they used to be! With blockchain, ravers receive a “code” that is anonymous which let them find the venue.

‘”One needs a number of ‘block confirmations’ to have passed to ensure access,” explains Amnesia Scanner, a Berlin-based collective of designers and musicians who have been anonymously contracted to play at some of these decentralised autonomous raves. “Once you’re in, you’ll often be given access to a decentralised application that uses a hybrid of proof-of-stake and proof-of-work, that secures the scene,” they say. Instead of peer-to-peer, it’s friend-to-friend.’ – via Wired

“Where can I find a blockchain rave?” It’s a hard question! Crypto raves are reportedly happening from Moscow to Berlin. Read this post on Vice for more info. 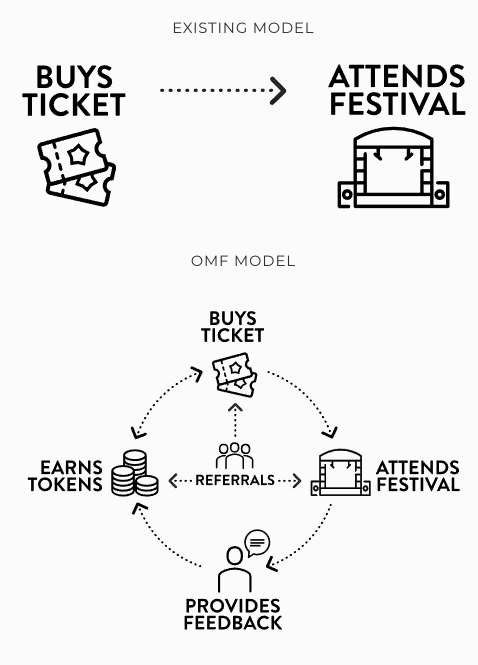 Live events are another powerful application of blockchain, which is an area that attracted DJ 3LAU: launching a blockchain powered music festival. 3LAU – real name Justin David Blau – thought of initiating OMF (Our Music Festival), the first ever blockchain festival. The multi-instrumentalist and producer believes blockchain can help the music industry:

“Imagine a world where a ticket is completely verifiable via blockchain technology via the progress that ticket makes across lots of transactions.”

The first OMF festival was held on October 20 at UC Berkeley, and comprised of blockchain educational boots to foster the awareness among participants – but it didn’t seem to yet integrate much of their blockchain-based ideas. In the future, they’re aiming to create fan and artist incentives, building a blockchain ticketing system, and allowing fans to help influence the decision-making behind the festival itself. But the initial take by The Daily Californian was underwhelming:

“And as any entrepreneur, Blau would make his defining pitch of the night during his own set. “Oh, here we go,” said one audience member, as if expecting that it had to come sooner or later.

[..] OMF was, according to its official website, the first festival of its kind to run on blockchain technology and introduce its own form of cryptocurrency — the OMF token, powered by Stellar Lumens. What exactly that means will remain elusive to a large part of the audience and the rest of the world.

Toward the end of Blau’s performance, confetti cannons shot out slips of QR codes that can be scanned for free crypto. Squared barcodes wafted in the chilly Berkeley air, reaching the rafters of the stage.”

If you love this blockchain post, hold on as we will discuss AI and music in the next topic.
blockchainblockchain festivalsblockchain ravesdjinmusikmusicoinproducersutopia music
70
You might also like More from author
Artist Features

Video: Amp Live On The Business Of Being A Modern Producer

What A Twitter-SoundCloud Merger Means For Producers and DJs