Denon DJ has just announced Prime 4, a standalone DJ rig with four internal decks, a large 10″ tilting touchscreen, a built-in hard drive, a second “zone” of audio output, and many more features. Learn more about the Prime 4 in this article. 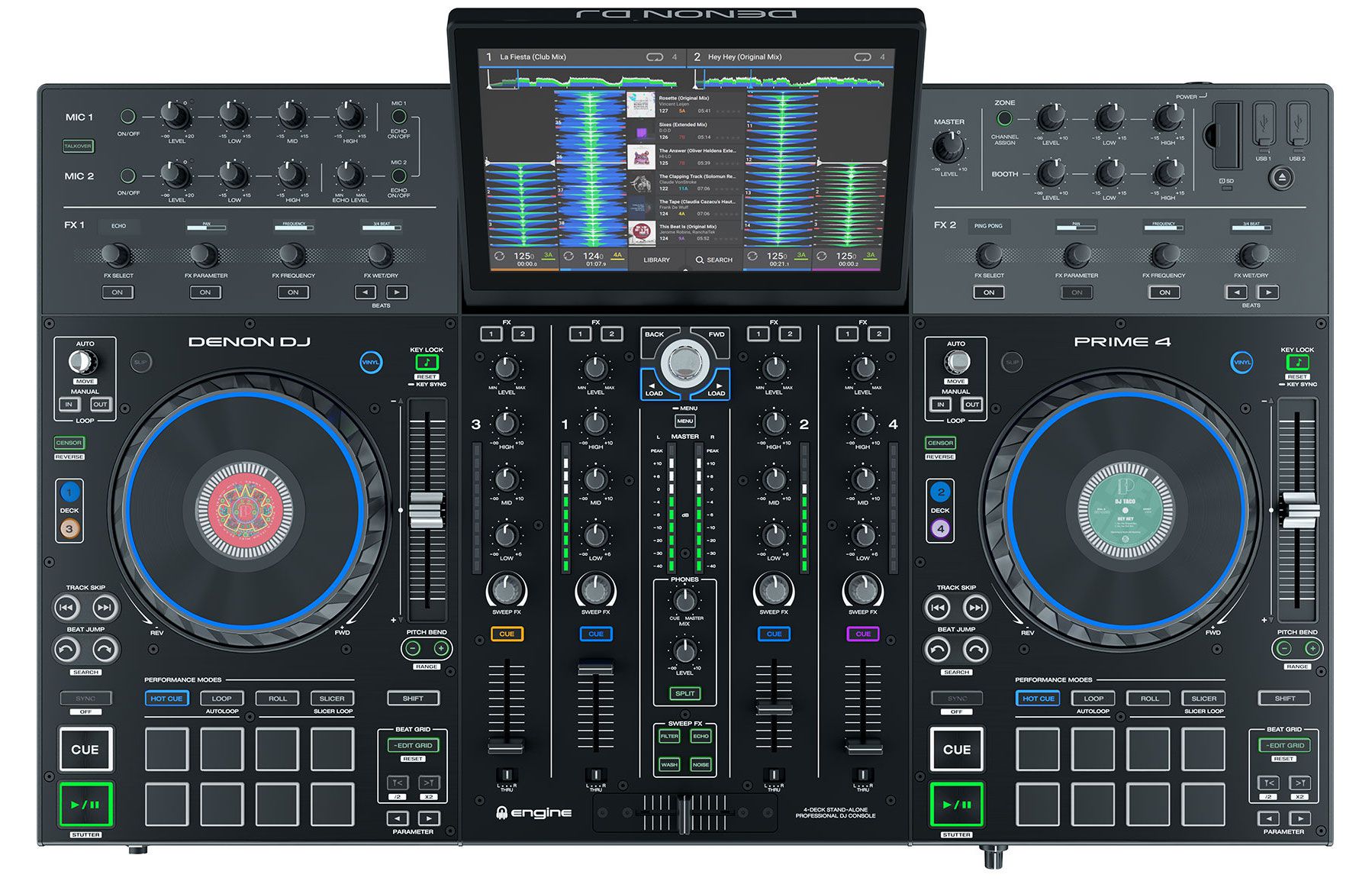 DJs have been asking for a four-channel standalone DJ unit for a long time. We constantly hear from customers who want a standalone S4 with Traktor built-in, or a four deck XDJ-RX. Yes, the old MCX8000 had four channels, but it could only play two decks of tracks.

The new Prime 4 represents all the best features of Denon DJ’s digital Prime ecosystem from the SC5000s, but all combined into one unit. It also touts some industry firsts – and until Pioneer DJ or another manufacturer fires back, it is unparalleled in what it offers for the price. Get primed for the feature highlights, below: 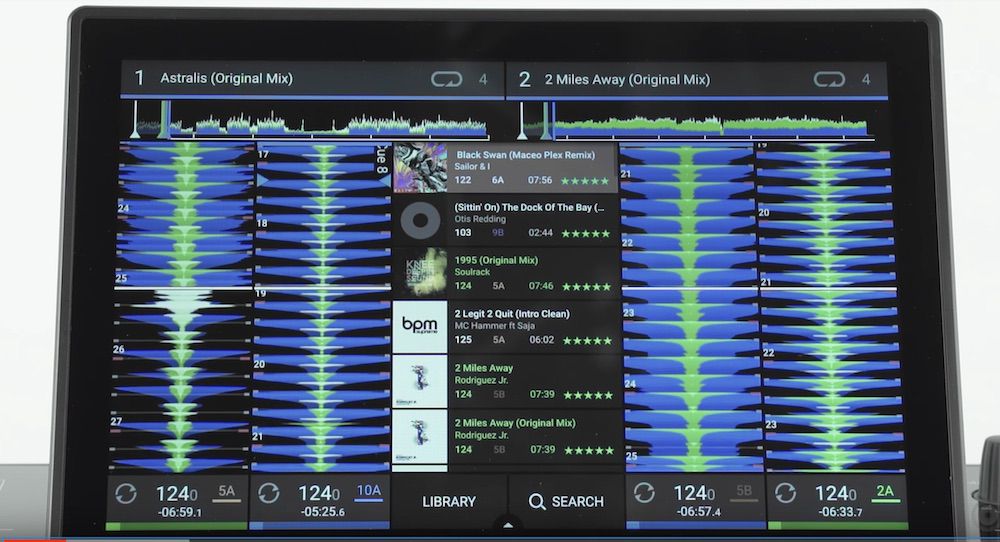 Engine Prime’s standalone install on the SC5000s is pretty much rock solid these days, running two layers of audio on each player. The Prime 4 will have four decks of playing audio on the built-in software. We don’t yet know too much about how the software works, but here’s what we know so far: 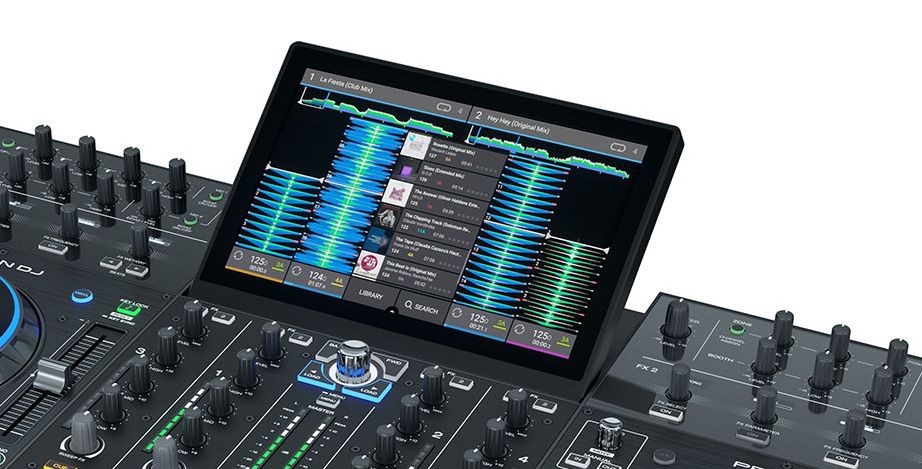 This screen is on the large side for a standalone unit, but honestly, the displays on CDJs and XDJs leave something to be desired. Beyond that, you need the extra real estate to reasonably see four decks on it – any smaller and we’d be sacrificing visibility.

It’s a multi-touch screen, meaning you can use a lot of the same swiping gesture controls as on the SC5000s – pinching to zoom, swiping tracks onto decks, scrolling through tracks quickly. This is a welcome reprieve from the XDJ-RX2 which has a touch screen but doesn’t seem to use it for most types of control.

This one is a strange choice, but I’m down with the flexibility that it gives mobile DJs: the ability to send a deck to a second set of XLR outputs on the back of the unit.

Based on the press release and controls on the unit, it seems like you can send one of the four decks to the Zone Out XLRs, and set playlist to play out on that second channel. Notice the “Zone Channel Assign” button in the top right of the Prime 4:

This has got to be the most amazing selection of inputs we’ve seen, ever, on a standalone piece of gear. The SC5000s were impressive, but the Prime 4 has:

Oh, one more thing here: you can hit record and start recording a mix on any of the connected drives or cards. Again, this is another area where Pioneer DJ seriously limited DJs on XDJ-RX/2 units by only allowing one of their two USB slots to be the Record Out slot.

The dual-pole Sweep Effects on each channel have the expected workflow of control, although it is a bit of an odd choice to put the selector right in the middle of the mixing section, above the crossfader and between the channel strips. It makes that section feel really crowded in these initial images. 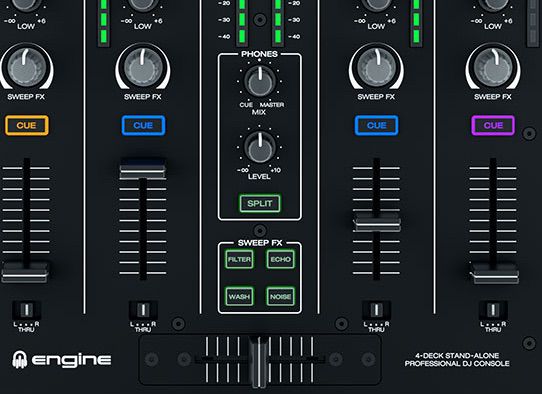 The Sweep FX offered are Filter, Echo, Wash, and Noise – all very useful. Worth noting that there is no parameter control for these, which means the resonance of these FX will not be easily controllable on the fly.

The Beat FX are a departure from the traditional model in terms of workflow. There are two FX units, one above each deck, and are assigned using buttons above each channel strip. There are four encoders for each unit, each with buttons below them for additional control, and small screens above to show what you’re controlling. 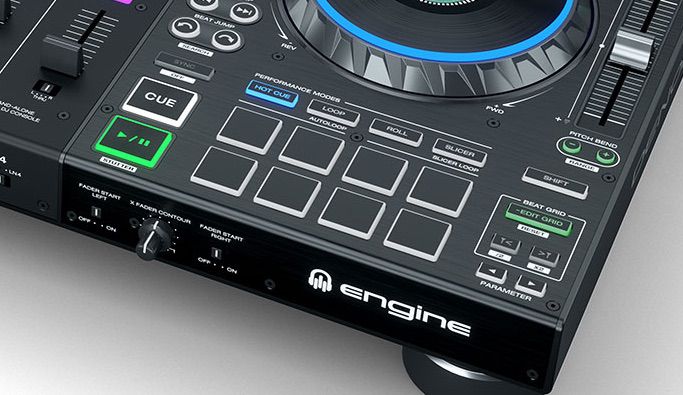 It wouldn’t be a new piece of DJ gear in 2019 if it didn’t have at least eight pads per deck on it, right? The Performance modes are exactly what you would expect:

A Few More Features That Are Rad

Look At That Price Tag

In a very clever move, Denon DJ has also decided to price the Prime 4 at the exact same price as Pioneer DJ’s XDJ-RX2: $1,699. If the unit delivers on the feature set, this represents a very compelling decision for DJs looking for a home setup. It also explains exactly why the SC5000 price was chopped late last year to $999.

We’ll see it at NAMM next week! Stay tuned to all of the NAMM news on DJTT here.
If you have questions about this unit, ask in the comments and we’ll get it answered.