What happens when a DJ develops their ideal portablism device? Introducing the 7PS (short for 7″ Portable Scratcher), a fully-working prototype product by French designer Lauris Honoré. We saw it at NAMM 2019, where the product (and it’s designer) are on the hunt for a company that will produce the unit on a larger scale.

The 7PS (check out their official website here) has been under development for three years. It contains a number of features that aim to directly improve on some of the bigger difficulties with portablism decks. Here’s what’s onboard:

The final feature set is of course dependent on their manufacturing partner – keep reading for more details on that process.

Looking For A Home

Independently developed gear prototypes are a rare breed, particularly at NAMM, which occasionally has larger companies “testing out concepts and gauging reactions.” But 7PS is different – the team behind it have developed the concept and now are trying to find a company to partner for manufacturing.

That’s not always an easy task – moving hardware from a development and prototype stage to mass manufacturing is hard (a great example is the 3-times delayed, Phase project which debuted last NAMM). Lauris is specifically not interested in managing a crowd-funded solution – he wants a company to manage the manufacturing and marketing sides entirely. 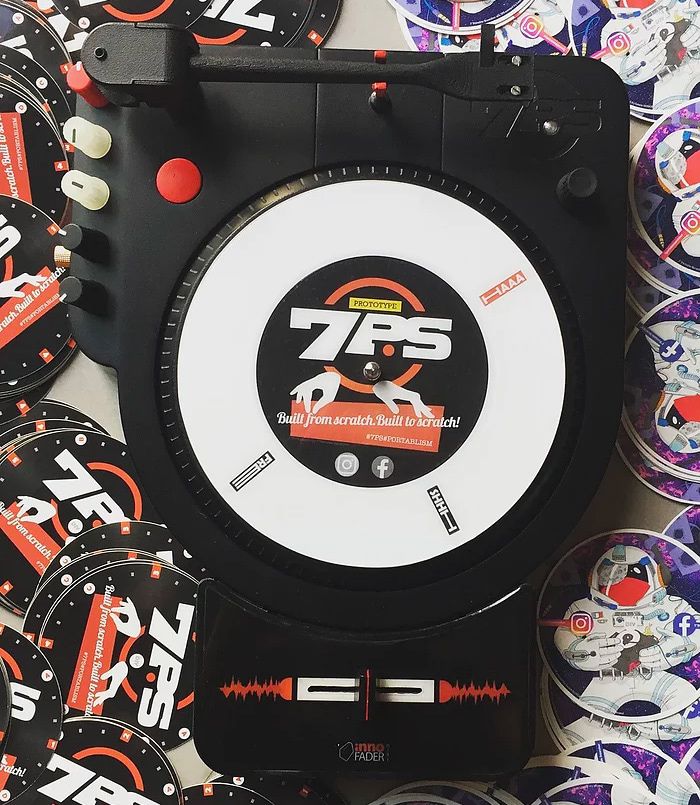 One of the dangers of shopping around a really nice prototype device like this is giving a chance for the competition to react. As the 7PS website notes, it’s “the ultimate 7” portable scratcher that will be copied“. But aside from Numark and their PT-01 Scratch, there aren’t many other companies making portablism decks – so it does feel like there’s a prime opportunity for a smaller company to stake a claim in the space.

Would you buy the 7PS? Who do you think should make it?
Share your thoughts in the comments below.