Ammobox- Load up your Scratch Samples

Nathan Ramella, who is known for his work on the unofficial Ableton live Python API, has come up with something that is sure to shake the very fabric scratching as we know it today. Ammobox promises to finish the transformation of the turntable from a utility device to musical instrument by converting control vinyl signal into midi like values. Using his software in conjunction with Reaktor 5 allows you to take those values and scratch multiple samples at once or scratch a stream of pre-sequenced samples layered on each top of each other. You can even quantize and record the results to quickly “scratch” in notes of a song on the fly. Imagine a scenario where you have pre sequenced a set of well known drum samples and you build a beat from scratch by layering in each sound at a time.

Ammobox requires no special hardware, it is free as long as you own a copy of Reaktor5 and is available for download on the Ammobox wiki. Or you can try this direct download.

Reaktor is capable of storing 128 samples which you can then control in Ableton though midi to create your own battle record as shown in this first public demonstration of Ammobox posted on youtube:

This second video gives you a better look at whats going on in the ammo box ensemble. The midi controls playing in the background is triggering samples in Ammobox that makes up the song:

What you see is only possible with several scratch artists each using their own precut vinyl just for the one performance. Ammobox also also offers quantization making scratching easier than ever before.

This not only works using vinyl time code, it will also work with a CD deck playing a time code CD. You can load any of the supported timecodes into Traktor, route the timecode audio stream into Ableton and then from there into Reaktor ensemble. Doing this makes it possible to scratch in Reaktor with the various midi jogs on the market.

One of Ammobox’s very handy functions is that when rewired, it can send out its own unique timecode that you can then record and save as an mp3 or burn it onto a CD to use with a CD Deck. That means you do not need to go out and buy timecode to use with Ammobox unless you intend to a use a vinyl deck.

To make things easier i have recorded the timecode for you – Ammobox Timecode Mp3, right click and save target as on link if your having difficulties downloading the file.

If you find the time code too short you can simply use the looping function in your dj software to give you a non-stop timecode stream going into Ammobox without any adverse effects on your scratching.

This last video demonstration of Ammobox shows what can be done if effects are added into the ensemble, in this case the Chris List Beat lookup effect is being used – which you can download here.

It is also possible to use an XY pad to control the deck in Ammobox by loading the Ammobox timecode into MadHeads XY turntable ensmble. This will replicate scratching the Timecode in Vinyl, which you can then use to control Ammobox by routing the timecode audio into Ammobox.

MadHead left us a very nice present in his comments, his Reaktor scratch ensemble ! Grab it here – Madhead’s XY pad ensemble. Hopefully over time we will see users build in direct midi support as opposed to having to route timecode. 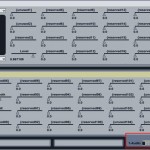 I tested Ammobox with my VCI-100, routing the audio from Traktor into Ableton and the only bug I have experienced with this setup is when doing fast spinbacks, the ammobox play position will wobble back and forward. I have not tested ammobox with a Vinyl or a CD deck so its not clear if this bug also exists using these interfaces. Please leave a comment if you do/do not experience this problem with Vinyl or CD.