Perhaps you decided to hold off buying a new controller in hopes of waiting for the Vestax VCI-300? While not exactly a “better” controller than the VCI-100 it did have a few specific upgrades that could mean big performance gains. Namely, high resolution faders and jog wheels. Well, sorry to be the first bearer of bad news but you should not wait around any longer.

When we asked Vestax about using the vci-300 as a standard MIDI controller after NAMM they were strangely evasive in their official answer: “yes- it will be a standard midi device but it is only officially supported with Itch”. It sounded promising but all things, like the weather, change with time.

Sure all of the controls are sending out midi data but there is not a single dj program out there other than Itch that can support the kind of midi data the vci is sending from the pitch faders and jog wheels. The high resolution dual messages cause 2 distinct problems for anyone that may try and use the vci-300 with any of the standard dj programs.

1) They are sending multiple messages which can be impossible to assign if midi learn is your only tool.

2) the data is in a format that does not fit within any of the standards presently used by software manufactures to express things like scratching, pitch bending and fading.

Well how does it work? 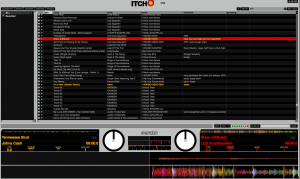 Really damn good- with Itch. The software/hardware integration is spot on and these new high resolution controls really make a big difference in those crucial fine tuning areas. For a full review you will have to wait on my article in Remix Magazine but I felt it important to fill you in on the the details of the midi controller in case you might be holding out for one.

Today Dj Tech Tools spoke with Charles Ono at Vestax Japan about their plans to make this new product available to users of other software. He confirmed that the vci-300 is an Itch only product at this point but mentioned “He may have something special up his sleeve” in a few months. What that means exactly is up to interpretation but for the foreseeable future I would not plan on using the 300 with anything other than Itch.