Review: Platinum Notes (Mac)+ Give Away

Brought to you by the makers of Mixed in Key, Platinum Notes (PN) is the tool you need to put that extra polish on your mp3s to make them really sizzle in the clubs. Some of the things you can expect are:

So, does it work as advertised? I’ve tried the software on numerous tracks, like Beatport MP3, ripped CDs, and on various musical genres, from pumping techno to disco. Let’s take those features one by one:

It is very useful to have your tracks ready to play at the same apparent volume. Your faders then have the same range, and there is no embarrassment when suddenly dropping a track that’s too loud or too soft. There are some apps that do that already, like MP3gain, but only works with mp3 and can take a lot of time. Platinum Notes on the other hand can work on MP3, m4a, wav or aiff.

The results are very good and every track is spot on volume wise so you can forget about your gain knob. Trying to use the auto gain function of Traktor with tracks adjusted in Platinum Notes often show a slight disagreement, and sometimes a large one.

Some of my Beatport MP3s had more than 2000 clipped peaks according to PN! There are usually from 10 to 50 in any recent track. I tried to clip to death a good track, run it through PN, and then watch for the clipped peaks in Logic, but since other processing has been done, it wasn’t very obvious. I then did an A/B listening test with Traktor, and there sure was some harshness removed. Here is a sample clipped track, and then the result when ran through PN:

To do an A/B test in Traktor, load both tracks, turn on the auto-gain, loop the tracks, phase them, and use the crossfader. 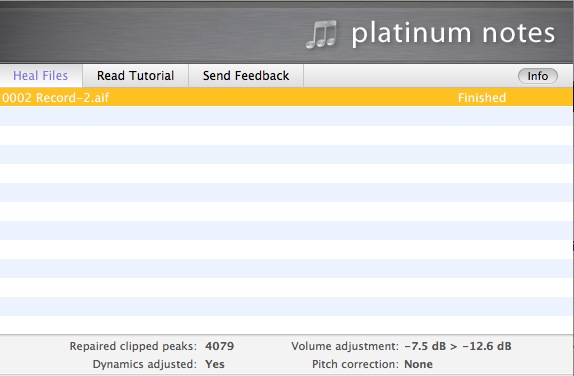 On the various tracks I tried PN on, the end result taken track by track is really good most of the time when doing an A/B. The processing has evolved since version 1.0, and is now a bit more bass heavy. This translates well on a big system so you really need a sub or big speakers to enjoy what PN does to your music. Many over mastered tracks have some contrast added and really do sound better than the original. The different parts are well balanced and have more relative volume. When a song hits after a break, it hits, when previously- it just went on. The more butchered at the mastering stage a track was, the more obvious this effect is.

Songs which did not go through dynamics processing sound a bit more full, but nothing extravagant. Strictly speaking, from an audiophile point of view, most the tracks sound somehow different. Sometimes the processed version is way better than the original, sometimes the original sounds a bit better, clearer.

On 95% of recent banging music, I would clearly go for the processed version. On non electronic old tracks, I’ll say that 50% of the tracks are better, the rest is ok, but pale a bit when compared to the original.

The thing that is important here from a Dj point of view is the coherence that Platinum Notes brings. If I can use an analogy with video, it is like all your sources have been balanced to have the same apparent brightness (volume) and contrast (dynamics). You can then go from one to the other seamlessly because they appear to be from the same source.

You could only achieve this effect previously if you played a set with records which were all from the same label, or from the same album. Most of the time had the same sound simply because the end mastering was done by the same guy… PN gives the same gentle polish to all the songs in your collection, and this makes them more easy to mix. When you add the de-clipping and the restoration of dynamics, your sets suddenly sound together, clean and contrasted.

The restored dynamics also mean that your music will be less tiring to listen to in the long run, and people will thank you for that. Some songs will perhaps sound a bit worse than if you had played the original, but this is largely compensated by the coherence, and overall your music does sound better.

Sometimes when you do an harmonic mix, it doesn’t sound as good as it theoretically should. This is because the whole song is a bit off key. PN track that and then adjusts your song so that it is perfectly in key. This works really well too, and when you do a whole harmonic set, it flows seamlessly. The drawback is that the pitching algorithm, while being probably the best out there (it is the same one that is used in Ableton Live), does slightly distort the sound. This is unavoidable, but is further compounded by the fact that your are going to use the same kind of processing again if you turn on the Key Lock of your Dj software.

This is far from being a show stopper though, and like with the dynamics processing, the added coherence is well worth it. Also, this only happens with off key songs, and there aren’t this many, maybe between 10-15%. A possible solution for that would be to have PN integrated with your Dj software, telling it directly how to correct the key of your tracks at the Key Lock level.

Sure, at $98it is a bit on the pricey side. This is because the developers had to license the mastering and the pitching components. Pro audio plug-ins have a cost and the mastering plug used here costs $200 when you buy it separately for example. Then again, adding an overall polish and consistency to your mixes will go a long way to setting you apart from the crowd and will mean more gigs in the end. Cant afford it? Enter the contest bellow and we will give you away a couple of free copies courtesy of our friends at Platinum Notes.

Get it For Free!


we will give away 3 copies to the lucky winners, which will be announced in the forum next week.