You may remember the video of me re-playing “sweet child of mine” live on the dance floor with a Rock Star guitar. Soon after we posted a guide on how to set that up yourself in this article. Coming in October the makers of Guitar hero are going to be releasing “Guitar Hero World Tour” which boasts a pair of sick looking controllers equipped with new features that might be great for djing.

The Guitar not only looks significantly better than the last version but boasts a bunch of new features that upgrade its usability as a dj controller or live stage instrument including:

Touch Sensitive slider on the neck

The big new addition is what Neversoft is calling the “touch strip.” Essentially, it’s a touch-sensitive section of the guitar neck right next to the standard, multicolored buttons. The touch strip doesn’t stand out from the rest of the neck, so you might not even realize it’s there if you’re not familiar with your new hardware. What this touch strip does is act as a multipurpose tool for several inputs and effects. One use is finger-tapping guitar solos, but you can also swipe your finger along it, side-to-side, to mess with the sustain on your held notes and provide a sound very different from the whammy bar. You can also use it to affect the synth sounds during songs with heavy keyboard usage.

could that mean multiple directions of movement tracking? 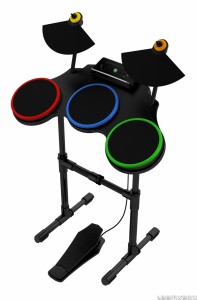 this is looking like it might actually make a great set of triggers for the studio or the stage. If the price stays under $100 then it will also be a bargin.

The last time we talked about this concept it became obvious there are precious few apps out there that effectively translate HID information into MIDI. The only one that actually does it for mac is $80 and may not be around for much longer. So to make it a little bit easier for those that want to try this sort of thing out we created guitar translator. Its a simple mac only app that is fast, super reliable and impossible to use incorrectly. Its only job is to convert almost any rock band or guitar hero instrument on the market into midi automatically. You dont have to do anything, just plug in a guitar or drum set and they will show up as midi inputs in your software

We will be posting more info in a few weeks but here is a little screen shot teaser for now: 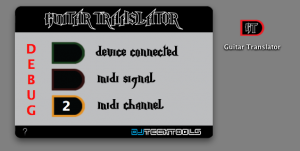