Nearly one year ago we held our very first TechTools digital dj competition. It was a youtube based video contest with the grand prize winner receiving round trip tickets and a gig in paradise.  Due to scheduling conflicts and the seasonal nature of Bali, it took a little while to actually go on the trip but we finally had our first annual Dj TechTools global meet-up.  Didn’t get to enter? Don’t worry  we will be holding more contests on a regular basis with lots of great prizes. Read on for pictures, reports and an interview with the contest winner; B33son.

Edit: Included a video of B33son mixing on the beach,  see bottom of post. 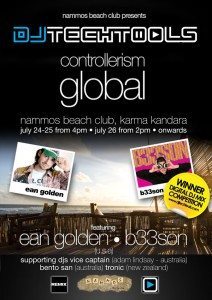 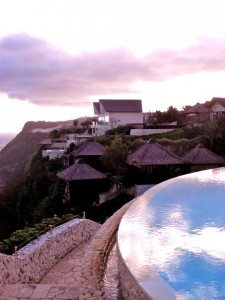 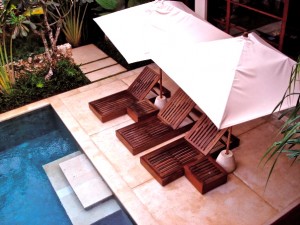 We stayed and played at the world class Karma Kandara resort, which has to be in my top 5 of all time. The views were beyond description and we stayed in our own giant villa with a private pool! 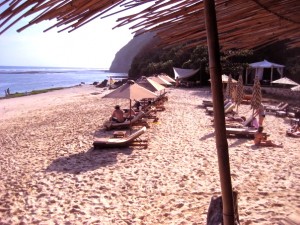 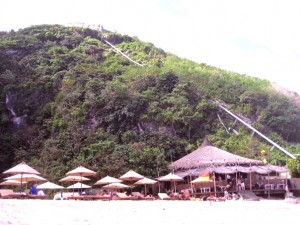 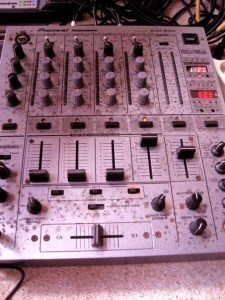 The beach club was quite breathtaking. It required a tiny elevator to access but once on the sand no-one wanted to leave. You cant beat the view from the dj booth (top) and the poor mixer sure has seen its fair share of salt (above) 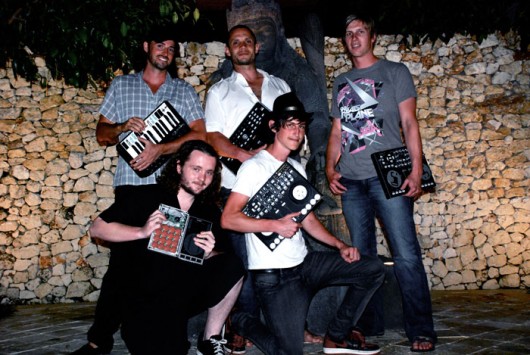 We sat down with the contest winner, B33son,  after his whirlwind trip to ask him a few questions about his experience:

The Bali Trip was an unforgettable experience. While the contrast between the world inside the resort and the world outside the resort is really fascinating and to some extent quite jarring. Bali overall still has some 3rd world aspects to it, the resort we stayed at, Karma Kandara, has to be the nicest resort I’ve stepped foot in. Each day whether in the resort or out on the city streets, I was continually entertained by new and interesting experiences.

It was great to experience all this with friends from DJ Tech Tools like Ean, Bento, Midifidler and Vice Captain plus some of their significant others, Michelle and Silje. The experience was so much better being there with such awesome people.

Q. Was it a Dj TechTools geek fest?

Yes and no. I do recall a few times that the eyes of our non-DJ Tech Tools accompaniments glazed over as we discussed midi mappings. But for the most part, we focused on the experience of being on the beach in paradise.

Q. Were you surprised that you won the contest?

Of course. My roommate happened to be walking in the door at the exact moment I opened my email and discovered that I had one. He said I was screaming so loud he thought the dog had died or something.


Certainly. My reputation and DJ profile has certainly increased. I’ve gotten bookings thanks to the video. I’ve met hundreds of people. I went to Bali.

Q. have you made any new dj friends as a result of the interactions online?

Yes, definitely! People are continually contacting me with different questions. I’ve also had a few new DJ friends out to play at some of the shows I put on. I’ve even gotten to meet some of them in person when they came through San Francisco, while I was at NAMM and in Bali of course.

Q. any words of advice for other djs out there trying to stand out?

Oh that’s easy… do just that. Stand out! When I was planning out my video and looking at other 10 min mix type competitions, I saw that almost every video out there was done in the bedroom. I figured why not record it during a show? I also didn’t try and overreach. I focused on a simple set of skills… mixing very quickly using multiple decks and demonstrating the guitar hero cuepoint juggling I learned from DJ Tech Tools.

Now, that was my approach, but don’t think that’s going to win you the competition next year. Do something that will make you stand out, but also know exactly what you want to demonstrate in your video and be the best at that.

Bento shot this video of him mixing on Karma Kandara’s beautiful private beach.