Today, Novation announced the ‘Dicer’ controller that we showed in this cryptic video last Friday. Dicer is a pair of button controllers that fit snugly onto a pair of Turntables providing DVS users with access to performance functions like cue points and loops right where they need them – on the turntable. Since Dicer was my invention, I would like to share a bit of history on the concept and why it was created in the first place. That and a review of how the controller actually turned out after the break! 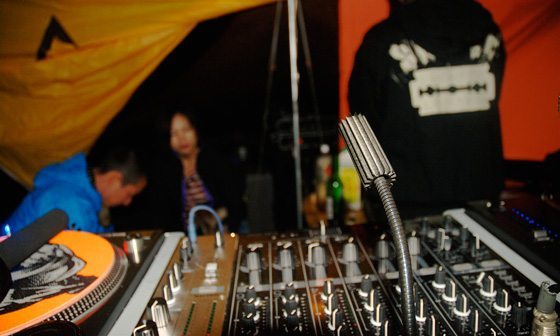 About 2 years ago, I started to carefully watch djs that had switched over to digital systems but were only using turntables and the keyboard to control their music. It seemed obvious to me that controllers could be used to great advantage by this group but few bought into the idea. The 2 main issues in the way of controller adoption were:

1) There is no consistently available space in the booth to put a controller in an ergonomic position other than on the laptop. Most booths are small by design and rarely have extra room to put controllers close to the turntables.

2) The only thing you could really midi map that was “performance oriented” in Serato were cue points and loops.  Now with loop roll, effects and cue point juggling in regular use Serato djs are discovering they need controllers to access the full potential of their software.

To solve problem #1, I had to come up with a controller that would fit naturally into a djs existing workflow. Something that could be consistently placed in an ergonomic and stable position, regardless of which night club they entered.  The only thing you can really count on in a dj booth is a Technics MK2-1200.  So if you can only count on the turntable, where on that turntable could you put a controller? The 45-adaptor hole, which provides stability and some clear open space, was the obvious choice 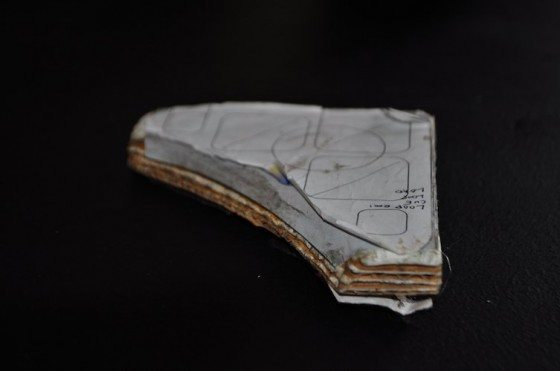 The photo above was my first cardboard prototype of what would become the dicer (it was originally named the MK-5 and our very own Midi-Fiddler helped develop the first circuit board designs). I took it around to all my Serato dj friends about 2 years ago and tried to convince them that they needed controllers.  Not surprisingly, my handmade cardboard button-thingy was not convincing and no one really bought into the idea. The early prototype did prove 2 things to me though.

1) The core concept of controls on the turntable was worth exploring.

2) Due to the suspension in the turntables legs, I could whack on the buttons and not disturb the record.

Cool – no one wants it yet but its works, now how do we make it? 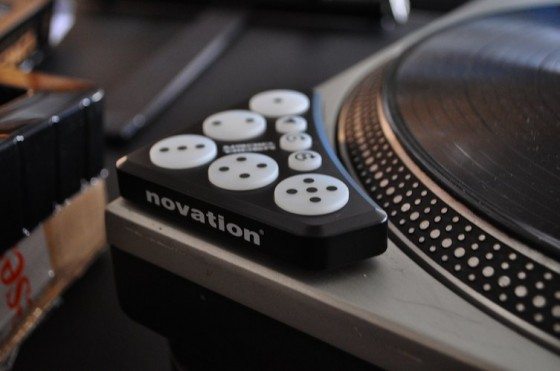 It became at the outset that in order for a controller like this to succeed, it would need to be produced in large quantities at a fair price and get into all the major stores. That certainly does not sound like a Dj TechTools product to me. We like to make specialized, hand made products that are sold directly to the customer. I genuinely believe a product like this will open up a new world of creative possibilities for turntable djs, so it was more important to get it into their hands at a fair price than sell it ourselves. With that in mind I set off to find a company that would buy into the crazy idea. After showing the concept to a few big names, Novation latched onto the design and really took it to the next level. Novation brought their expertise in manufacturing to the table and produced a controller we never could. Its well made, easy to use, tied directly to Serato and at $99 for a pair- a really good price.

The team at Novation also came up with some cool innovations of their own. They introduced the dice marking concept, which is universally readable from the standard and battle style turntable position. They also came up with the concept of making the 45 adaptor removable and including a pack of good old silly putty which allows you to stick dicers onto a laptop,mixer or CDJs- 3 more great places to put controllers in a crowded dj booth.

HOW DID IT TURN OUT? 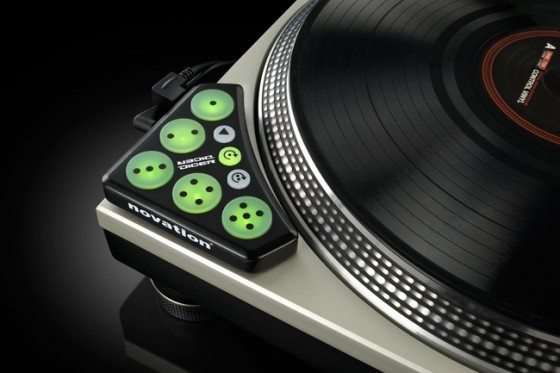 I am very pleased with the results. All of my Serato dj friends that now want controllers have been bugging me for weeks to loan them pair. The buttons are responsive and find a happy medium between squishy and resistive. I wish they could have been arcade buttons, but that would have never fit on the turntable. To make up for the lack of spring loaded action, I made the pads the exact same size as our famous 20mm Sanwa arcade buttons so there is plenty of room for finger tapping.

The 3 modes are easy to understand and with 2 different LED colors, easy to see which is on at the current moment. I have also been pleasantly surprised to find that the dicer does not really impede any access to the turntable. The djs I watched use it were able to scratch and pitch bend easily. Now we just need to find someone that can combine finger taps and scratch actions all in one expressive movement.

Because USB ports are just as limited as booth space, the dicers are designed to link up with each other using a common 1/8th inch cable which transfers data and power – meaning you only need one USB to power 2 units.

With 5 buttons and 3 modes (cue points, loop roll and loop) the dicer packs a lot of functionality into a small space. The direct integration with Serato is very cool, although I am excited to come up with a more impressive Traktor mapping that brings FX controllerism directly to the turntable.  Your probably thinking, “Hey Ean, what other designs do you have hiding over in the dj TechTools labs?” Well…. lets just say 2010 is going to be a great year for controllers.

for additional information visit the Dicer product page at Novation.com