With the iPad 2 hitting stores in the United States at the end of this week, Apple looks poised to hold off the growing competition and stay strong with its position as the leader in tablet computers. However, will it be the mobile dream device that digital DJs and producers have been hoping for? Let’s take a look at the critical new features of the iPad 2 and see how it stacks up to its closest current competitor, the Motorola Xoom.

The original iPad was a major success for a variety of reasons, but it wasn’t by any stretch of the imagination a powerhouse in computing power. The iPad 2 is primarily a major upgrade in technical specs, while the prices for each configuration stay the same.

First up, Apple designed a new custom made A5 1GHz dual-core processor specifically for the iPad 2. The first-generation iPad ran on an A4, which also has a clock speed of 1GHz but is a single-core processor. Although Apple is touting the iPad 2 as twice as fast as before, dual-core doesn’t necessarily mean that speeds are directly doubled. Rather, it means the chip processes data much more efficiently. Additionally, Apple claims that the new A5 processor will deliver its faster speeds without causing a huge drain on the battery, which supposedly will last up to 10 hours of active use. 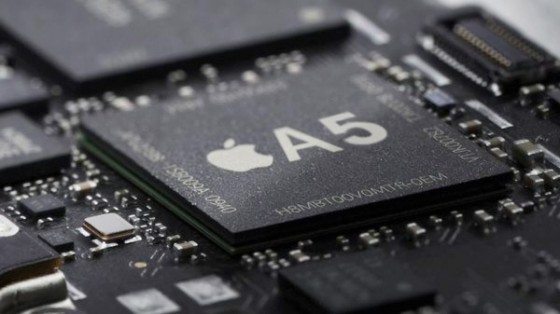 Both the A4 and A5 have integrated GPUs, and while not much is known about the graphics processor in the new iPad 2, Steve Jobs claims that the A5’s video engine will boast speeds that are nine times faster than those on the first iPad.

Besides the processor upgrade, the hardware on the iPad 2 seems mostly comparable to that found on the original – although we were excited to see that Apple added a gyroscope to the device, allowing for a full range of motion detection that was not previously possible with only an accelerometer.

WHY DJs SHOULD CARE

This performance upgrade in the iPad 2 could potentially mean seeing the device integrated into DJ setups as primary controllers. While the original iPad made a number of high-profile DJ booth appearances, it has yet to amount to much more than a flashy accessory.

Enter the app developers: As always, having access to a hardware platform with a higher set of specifications means the ability to develop more stable, more powerful applications, which will most likely be attractive to developers who have avoided touching the iOS platform yet (we’re looking at you, Rane and NI). In the last few months, we’ve seen fairly simple DJ applications arrive on the iPad, including the top-selling Djay application by Algoriddim.

Coupled with the announcement of the iPad 2 was the release of a $4.99 version of GarageBand for iOS, allowing users to utilize the iPad’s large touchscreen with the simple but powerful array of tools in GarageBand. Besides being limited to 8 tracks, it’s nearly identical to the full version of GarageBand on OS X. It’s focused around a central multi-track arrangement window that allows for recording and editing of audio and MIDI tracks. As with the OS X version, it comes complete with a full library of audio and instruments.

Even better, the built-in multi-touch instruments let you play keyboards, guitars, basses and drums directly onscreen, which could be a boon to your live performances. It’s great to see a miniature DAW on the iPad, and maybe it will lead to some more professional DAW solutions for it in the near future.

The addition of a gyroscope to the iPad is fairly significant; here’s another way to allow users control over their applications. The potential uses for DJ applications is exciting considering that one of the largest complaints about a lot of touchscreen digital DJ kit is the lack of tactile control, this is a promising new feature that allows for a different way to manipulate your applications, and maybe soon, your music.

THE ICING ON TOP

A few new additions don’t really affect DJs directly, but they still add greater value, given that the iPad 2 will cost the same as the original. For example, there is a front-facing VGA camera that will enable FaceTime, Apple’s video calling service for iPhones, iPads and Macs. The rear-facing camera will now shoot 720p HD video, which you can edit in the new iMovie for iPad ($4.99). The iPad 2 will also ship with the new iOS 4.3 upgrade, which speeds up Safari browsing, lets you access your Mac’s iTunes library over Wi-Fi, and lets you stream music and movies from the iPad to an Apple TV. 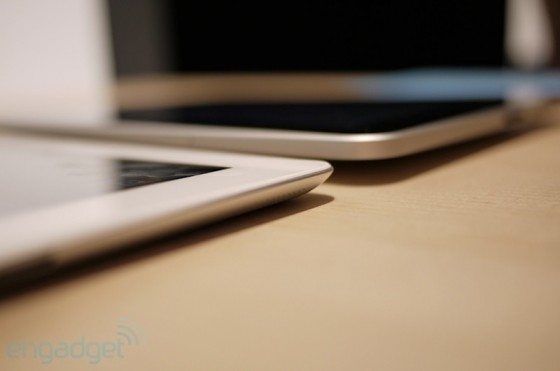 One of the strange things in all of the news and discussion over the iPad is the fact that Apple isn’t revealing the amount of RAM in the iPad 2. One unconfirmed source (via Gizmodo) let it slip that the new tablet might have a meager 256MB – the same as what the first generation had. Even with a speedy new CPU and GPU, there’s no doubt that such a small amount of RAM could be a serious cap on memory-heavy apps. This won’t be as big of an issue for apps that don’t actively load and unload media, so DJ applications that act as controllers, such as TouchOSC, will be mostly unaffected. If you’re planning on running an all-in-one DJ solution on the iPad 2 that actively holds long songs and samples in the RAM, 256MB RAM could be a serious inhibitor.

The iPad 2 continues to sport few offerings in the way of input and output – just the classic 30-pin dock connector and the stereo headphone jack. Of course, achieving such a slim form factor and sleek design might have proven harder if USB ports had been included, but it most certainly would have opened up a number of possibilities.

There are accessories that utilize the dock connector to expand the iPad’s input and output capabilities – such as the camera kit which adds a USB port and allows lower powered MIDI controllers to be connected directly.

IS THIS THE TABLET TO DJ WITH? 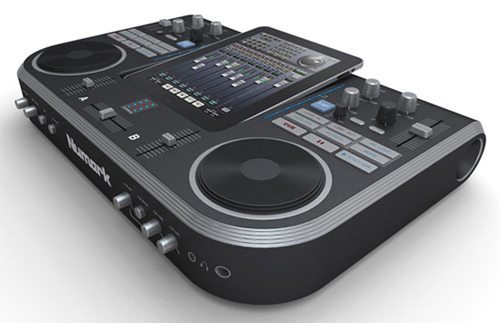 Our assessment is that the iPad 2 has serious potential to be utilized by developers to make some killer DJ applications for – but at the moment, it certainly doesn’t feel like it’s a laptop killer for DJs. That would require at the very least more RAM and connectivity, perhaps via Apple’s new darling for high-speed data transmission, Thunderbolt. However, iPad 2’s new power, along with its environment of more than 65,000 native iPad apps, make most other touchscreen tablet devices seem weak in comparison. Expect to see more iPads than JazzMutant Lemurs in DJ booths this year.

As for the other competition, a slew of 10-inch tablets utilizing various operating systems are set to drop in the next few months, including the RIM PlayBook, Samsung Galaxy Tab 2 and the HP TouchPad. But for now, Motorola’s Xoom is the main competitor, and the only currently available tablet running the Android 3.0 (Honeycomb) OS. Honeycomb is the first Android OS to be optimized for tablets, rather than smartphones. 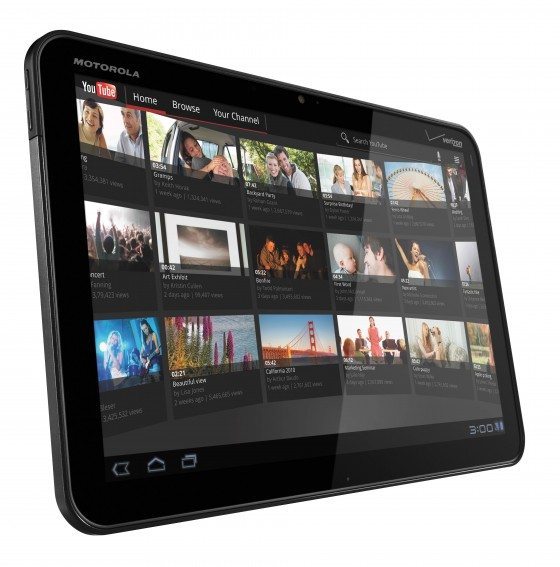 In the smartphone arena, the Android platform is actually gaining on the iPhone in market share and offers more than 100,000 apps. For tablets, however, the Android app market is basically starting from scratch, and it remains to be seen whether the offerings will gush in or slowly trickle down. Because the music production and DJ market are already a narrow niche of interest, we speculate that the majority of those app developers will be more likely to put their limited development resources into the platform with more than 15 million current users: iOS. That is at least until Android tablets gain some momentum.

There’s also a question of whether the non-Apple tablets even will gain momentum if they can’t match the iPad 2’s prices. In the case of the Motorola Xoom, the specs are comparable or favorable to the iPad 2. It also has a dual-core 1GHz processor, front and back cameras with 720p video, comparable battery life, and a gyroscope/accelerometer combination. On the plus side, the Xoom has 1GB of RAM, a micro-USB 2.0 port, and an Android app market that does not require developers to be approved before they can offer their apps. For those advantages though, the lone Xoom model with 32GB, 3G and Wi-Fi costs $799, as opposed to $729 for the iPad 2 with 32GB, 3G and Wi-Fi. (See full spec comparison chart below.)

We’ll be keeping a close eye on DJ app development for the iPad 2 — as well as other tablets — to find those revolutionary applications that will change the game. For now, what do you think? Will an iPad 2 be a good addition to your setup? What kinds of applications do you want to see developed for DJs?

The iPad 2 ships Friday, March 11th in the United States. 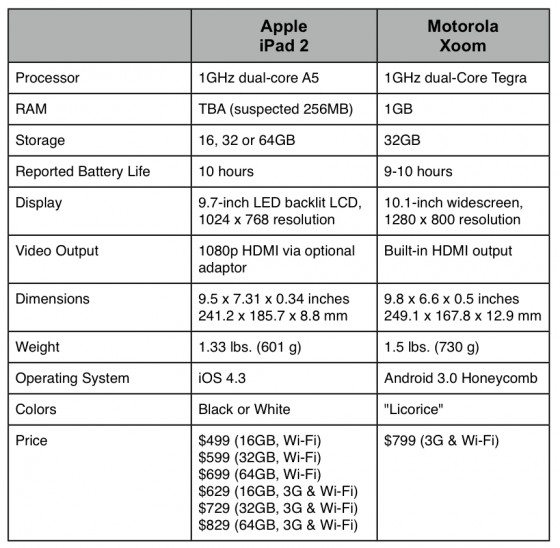