Okay, if one was better than the other, top flight mixers would only have one – right? Yet it tends to be the cream of the crop that feature both. Why is this, and when should you be using which?

Not to confuse you, but EQs are a form of filter. The bottom line is that a filter takes a sound input, applies a rule to it, and then outputs its modified version. Whether that’s an EQ/tone, low pass, high pass, band pass, notch, or any number of others, filter is as filter does – but when we talk about filters on DJ mixers we just mean that single knob that sweeps across the entirity of the track. 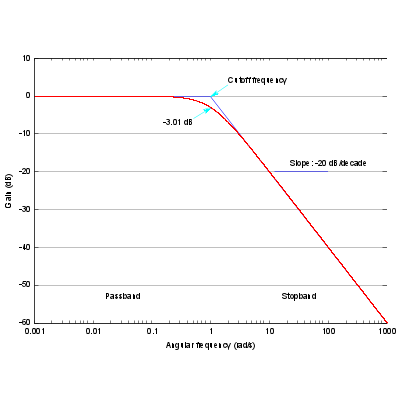 The image above represents a low pass filter’s frequency response. A DJ filter, when integrated into a mixer, is almost always, nowadays, a dual mode affair; the central detent is the off position and a clockwise and anti clockwise motion respectively take care of high and low pass filtering (the Vestax mixer in the header is an uncommon exception… but it’s a very pretty mixer so we thought it was worth the confusion. Allen & Heath have also traditionally used filters that switch modes with a button). ‘High pass’ and ‘low pass’ are pretty well termed in that they, as they are ramped up, have a progressively smaller guest list, so to speak, and the frequencies allowed through are whittled down until only the very lowest/highest are allowed past.

EQ, on the other hand, tends to have three ‘bands’ – think of them as areas of influence over frequencies in the track – but sometimes have two (ala the lower end Vestax PMC mixers) or even four (the Allen & Heath Xone 62/92, for instance), and the most notable thing that a DJ filter doesn’t do that the EQ section does is boost. All the filter does is reduce the amplitude of frequencies; turn your EQ clockwise and it will make the frequencies in its domain more powerful.

One of the big advantages to a filter is the way that there’s just the one knob to worry about. Mixing with a filter can be really subtle, because of the smoothness with which frequencies are added to (or taken away from) the mix.

Mixing with EQ brings with it the advantage of a high level of control, at the expense of the sweeping smoothness of a filter. Whilst it’s difficult to create a smooth sweeping frequency effect with channel EQ on account of the reality of dealing with a knob for every EQ band, it’s not only simpler to pinpoint a specific problem point or sweet spot with EQ but is the only way to isolate the mid range of your audio as well as both top and bottom end.

If all filters were born equal, then there’d be no arguments over who had the best – and we all know that’s not the case. A good DJ filter isn’t completely flat; a good DJ filter has character over and above simply ‘turning the sound down’. All the things that make one filter sound different to another are actually quite involved so we’ll leave the nitty gritty for another day,  but two of the big ones are steepness and resonance. The steeper a filter’s cutoff is, the harder frequencies are attenuated when they pass the threshold. An exceptionally steep filter will completely kill frequencies more or less as soon as they fall outside the cutoff point, whereas a gentler one will attenuate the frequencies smoothly as they’re cut out. This steepness curve is measured in dB per octave, and typically speaking DJ filters are quite, but not ruthlessly, steep. Resonance (often called Q) is the amount by which, just at the cusp of the cutoff point, frequencies are actually boosted with a little hump before they’re cut out. The more Q a filter has, the more of a warbly, ‘singing’ sound it creates as it’s turned, and this characterfulness creates two camps: those that love it, and the more the better, and those that hate it.

The smoother a filter, the more clinical and precise it is and thus the more accurate for using as a blend control, but at the same time the less musical it tends to sound. Different manufacturers and software developers give their filters different characteristics – and in this digital age, many are building in the opportunity to choose the style you prefer in settings.

If you’re DJing with only the biggest, boldest, brightest confirmed dancefloor destroyers, and especially if they’ve never been out of the digital domain, using EQs for technical rather than creative reasons might be a foreign concept. If, however, your selections are a mixed bag of different eras, genres, formats – especially vinyl – and top-secret work in progress dubs, you’ll know that a little EQ goes a long way to bridging the gaps between how two tunes are mixed (and I mean mixed in the engineering sense here), and this is definitely the area in which EQ shines.

The ‘highs for high hats, mids for vocals and lows for bass’ mantra that many a DJ spits out whenever EQ is mentioned is a pretty big over-simplification, but it’s not one without foundations. Matching the levels of not just the general volume of the tracks you’re playing, but also their composition, will make for a smoother mix. Got some 80s house that just doesn’t thump as hard as 2011’s sonic pallet? Perhaps some bass is in order. The sound coming off your records a little harsh compared to the digital smoothness of your latest Beatport wavs? A little tweak to the mids should sort that out. You may even be the kind of perfectionist that, armed with the power to twist, stretch, and massage tracks, always has a hand hovering over the EQs to smooth out any changes in the tracks. But with all this technical tweaking, your EQ dials resembling the London/New York/Sydney world clocks in a high end board room, how do you fit in the creative frequency fiddling without losing your consistency? You guessed it.

DJ filters are, I’m fairly sure without exception, post-EQ (please let us know if you know any otherwise!). Whatever those EQ dials are doing, they’re doing it before the sound gets into the filter. This means that the filter’s effect on the track remains consistent no matter what’s going on up there, and so you can use the EQs to dial in the perfect character for the track – the setting at which all your tracks match each other tonally – and leave the filter to provide the artistic flair and frequency led mixing and blends.

Any tips of your own? Let us know!
eqfiltertechniqueTips
4
You might also like More from author
Production Tips