Oh, Maschine. Are you the all-in-one music production hardware/software for the masses, the ultimate drum pad MIDI controller, a killer plug-in instrument, or just the prettiest multicolored light show on the music store shelf? Could you possibly be all of the above? No, that can’t be possible. But then again, maybe. Just in case, we’re going to examine every last perk of Maschine Mk2 and get to the bottom of this enigma.

The Bad: The TSI for Traktor is either janky, not updated for Maschine Mk2, or both. Its unique workflow takes some learning for producers coming from either hardware or software backgrounds. We’re still waiting for some mind-blowing Maschine/Traktor integration.

The Bottom Line: While not an essential hardware update for existing users (the free 1.8 update is much more essential for them) , the Maschine Mk2 makes concrete improvements to an already solid, flexible music production platform for the same retail price. This should entice novice producers with its all-in-oneness and tempt initiated music makers to incorporate it into a larger setup. 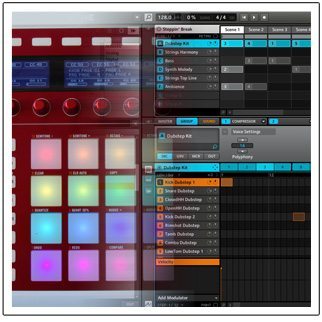 MASCHINE IN A NUTSHELL

In case any of you are not familiar with Native Instruments Maschine, the concept bears reiterating, especially because the Mk2 update is more of an evolutionary than revolutionary update.

My speculation is that NI developed Maschine several years ago to rip the hip-hop producers away from the popular Akai MPC workstation and bring them into NI’s universe of computer-based music production. That process has had some success, is still ongoing, and of course along the way many other music producers and DJs embraced the very worthy Maschine platform as well.

It’s a rather ingenious meeting halfway between the worlds of hardware music production — specifically MPC-style sampling workstations — and software digital audio workstation (DAW) production. Maschine’s hardware provides a familiar drum-pad workstation interface, and its software and connection to a computer allow it to leverage the power, user-friendliness, and easy updatability of computer music while keeping the price much lower than expensive hardware workstations.

Maschine can be an extremely capable standalone system, yet users of other production software can also use Maschine as a plug-in instrument and/or a MIDI controller.

As someone who has a background with both MPCs and (more so) with DAW software, the Maschine workflow came with somewhat of a learning curve – but the basics are fundamental. Maschine assembles Groups of sounds — often a drum kit’s worth of percussion sounds, but also instrument sounds — that act like tracks in a typical DAW. You create Patterns with the Group sounds, then group together Patterns into Scenes, and then order Scenes to create a song.

You have full sound editing capabilities, many onboard sounds and effects, the option to sample straight into Maschine, and Maschine can even host plug-in instruments and effects, making its possibilities truly infinite.

As with Native Instruments’ other software products, Maschine runs quite deep in functionality. To get the most out of it, you should dive just as deep into learning it, which means scouring manuals and tutorials. Also like other NI programs, you could use Maschine on a basic level without digging much deeper, and you will eventually stumble upon new things, but you may be missing out on some really powerful sound editing hidden under a small menu arrow, or some Group-level routing or quantizing options, and so on, and so on. 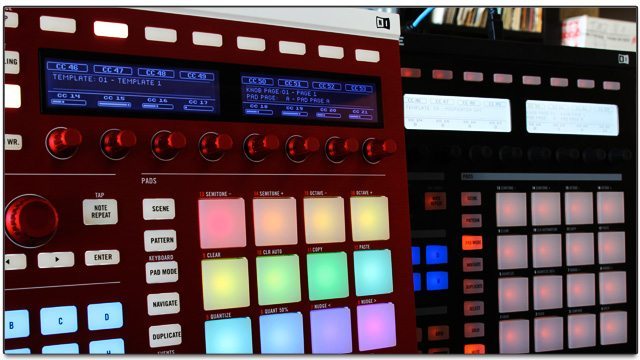 Some of the most important changes to the Maschine Mk2 hardware aren’t actually visible in comparison to the older version (above image: Mk2 on left with one of the custom red faceplates;  Mk1 on the right). Most importantly, the buttons and pads are backlit with RGB LEDs, allowing them to illuminate in many colors, including white. Maschine 1.8 software adds support for color coding Sounds, Groups, Patterns, and Scenes in a rainbow array of 16 colors, similar (or more likely identical) to the color of the Remix Decks in Traktor 2.5. Those software elements get their own default colors that you can change to your liking, and the colors of active elements in the software are immediately reflected on the hardware buttons and pads.

The new button and pad backlights look spectacular and have at least two very distinct different levels of brightness intensity. Because Maschine doesn’t shuttle any audio and uses energy-efficient LEDs, the unit can power its displays and tons of bright multicolored buttons all on USB power.

The drum pads don’t seem to have changed in feeling on the Maschine Mk2 – they have the same middle-ground feel—neither too firm nor too loose—same quick triggering sensitivity and responsive velocity sensitivity. That being said, when we reached out to Native Instruments prior to publication, they reported that the pads were very much rebuilt to increase sensitivity drastically:

The pads have been refined substantially, increasing the sensitivity, something which can also be adjusted via the software. Maschine power users such as Jeremy Ellis have already commented enthusiastically on the new, more sensitive feel of the pad which allow for more creative finger-drumming techniques such as advanced drum rolls etc.

In a welcomed improvement, the buttons now have a satisfying click response when clicked, which I liked particularly well when using the buttons for critical live performance or automation tasks, such as muting groups during playback.

No longer rubberized, the eight encoders also feel better to me. They’ve been ever so slightly streamlined, without losing their grip. They also twist just a bit more buttery smoothly. 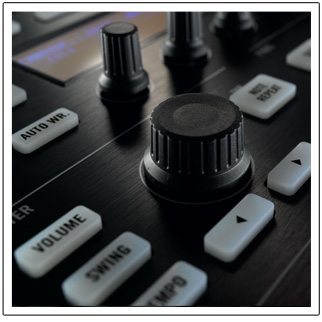 The biggest change to the control layout comes with the Master section. The three knobs of the old Master section have been replaced with a single push-button encoder and buttons for Volume, Swing, and Tempo. By default, the encoder works like a jog wheel for skipping forward or backward through an arrangement or for navigating and selecting items from the browser. The arrow and Enter keys in the Master section have the same purpose.

The new Mk2 comes in both black and white versions, and there are also additional color replacements available for the magnetic top-plate and knobs  – the one shown in many of the photos in this review is the red custom kit. Additional colors include gold, red, pink, blue, and gray.

Lastly, the Maschine Mk2’s displays now have a dark background and light text, rather than the other way around on the old version. This helped with the display’s visibility in a variety of light conditions, and of course you have full control of the display’s brightness level from the global settings. 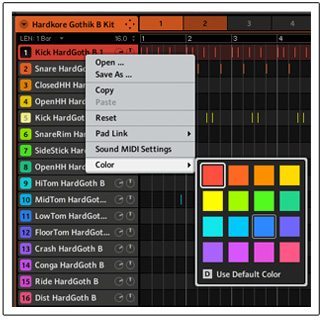 Besides the other general sharpness to the user interface, the Maschine 1.8 software adds support for assigning 16 colors to the Sounds, Groups, Patterns, and Scenes that are also then matched on the corresponding hardware buttons and pads. The software by default assigns a new color to each Group, Pattern and Scene, and makes Sounds the same color as their Group, but you can change any color individually or make global changes in the Preferences.

Many of the other software updates are quite minor features (full list below), but one other notable change add the Stretch option to the Sample Edit menu. Stretch allows for the independent time stretching and/or pitch shifting of an individual sample — aka Sound in the Maschine nomenclature. It’s quite a powerful sound-shaping tool, and like many aspects of Maschine editing, it can be done from the hardware displays and controls or from the software. Edited sounds can also be exported as WAV files.

Other new features in Maschine 1.8:

One final note about Maschine 1.8 – all users who upgrade to this version of the software will get a free version of Massive that’s integrated with Maschine – meaning that you’ll be able to do synthesis with Massive in the software. Pretty nice, especially if you already own Maschine!

Of course you can use the Maschine hardware as a general MIDI controller by pressing Shift+Control at any time to send it to MIDI mode. So if you want to create your own mapping for Traktor or any other MIDI software for that matter, the large number of high-quality buttons, pads and encoders can make for fertile ground to sow for MIDI control possibilities.

However, there is also a .tsi file available for Maschine in Traktor’s Controller Default Settings folder that’s installed with the software. It would seem that as of Traktor Pro 2.6—of which we had access to the beta version—the Maschine .tsi hasn’t been updated yet for Maschine Mk2, because the PDF of the controller mapping (below) still shows the old hardware version.

So I can’t be super judgmental of the .tsi with Maschine Mk2 until NI updates it, because it does need some work. The Hot Cue Mode and FX on/off buttons weren’t working, and the loop functions seemed inconsistent.

However, for controlling Traktor’s two FX units, Maschine’s top row of buttons 1-8 and encoders 1-8 were awesome. The controls felt entirely appropriate for effects, and having four encoders and four on/off buttons for each FX unit is more than you get in some dedicated DJ controllers. Maschine’s ability to have a Shift layer of functionality also gives it great potential as a Traktor controller. The Shift functions in the current .tsi weren’t entirely clear and seemed to behave erratically at times, but again, I have to give NI the benefit of the doubt that the .tsi will be updated for Maschine Mk2 soon enough – likely with Remix Deck compatibility? For now, if you want to take advantage of the controller’s great drum pads and buttons in your own mapping, the possibilities are promising for cue points on the drum pads and looping functions on the 8 Groups buttons or the row of 8 mode buttons. 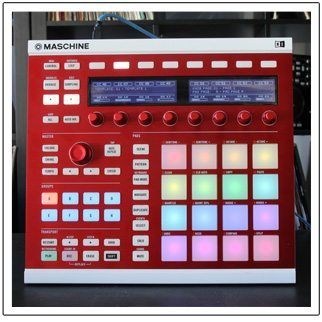 I have to think that the update to Maschine’s v 2.0 software will somehow take a much bigger advantage of the new hardware, or at least present a pile of new and impressive musical options to it users. I’m a fan of Maschine and use it regularly on my own time, so it’s not hard to recommend it to DJs who are looking to dip their toes into music production for the first time or to seasoned producers who may be intrigued by its bridging of production world.

The new color-coding options and other hardware and software improvements essentially make an already cool production platform just a bit cooler for the same price. Yet even though the colors are gorgeous, the combination of Maschine Mk2 and Maschine 1.8 software it still feels like a bit of a timid advancement to justify a new hardware unit. I understand that NI wouldn’t want to change things too radically; it has to keep the Mk1 hardware compatible with the new software to avoid alienating its loyal customers.

But I still have a strong suspicion that the next software update will be something special – we’ve only heard rumblings from folks in the know about Maschine’s v.2 software, but they’re very excited rumblings. That’s not a lot to go on, but we definitely know that it’s on the way before too long. We’re looking forward to it. Are you?

Please tell us what you think about Maschine Mk2 in the comments. Do you think the hardware will be good for DJs? Does it interact enough with Traktor? Do you like its approach to music production? Do you want to know more about the version 2 software when it comes out? Thanks; you’re the best… around.