A lot of DJs who are gigging regularly need to step away from the DJ booth – from making sure the bridal party is ready for their first dances, to using the bathroom during a lull in the dancefloor, to finding the promoter to make sure you’re getting paid. Even when you step away, it’s critical to make sure you’re covered – so today we explain one of the often overlooked features in Traktor, Cruise Control and Fade Markers. Read on! 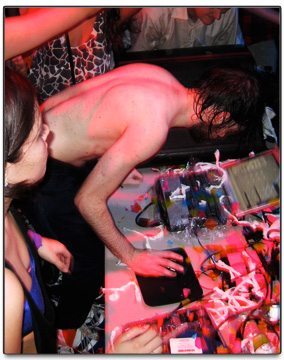 Things are getting a little messy, you’re not sure what’s going on in the DJ booth and you need a break – it’s time to turn to the Emergency DJ set! To be honest though, I hope you never get to the stage of the poor guy (Greg Gillis, AKA Girl Talk – photo credit dpstyles) featured in the image at right. It’s more likely that the situation you are in is as follows

There are some tracks out there that I usually line up for this occasion, good 7 or 8 minute long mammoth tracks. But sometimes you need longer than that! I know, there’s not too many situations where you need that long away from the decks, but maybe you met someone special at the bar and you wouldn’t mind grabbing a quick drink with them? Alternately, you might need to go talk to the promoter, bridal party, club owner  for any number of reasons -so instead of rushing back to the decks, deploy your emergency DJ set!

You have a couple of options when it comes to an emergency set. You could have a prerecorded set, which you can then mix into your live set at any point. The disadvantage to this method is that you’ll need to have your pre-made ready for the type of crowd you’ll be encountering and what part of the night you’re in. Not always ideal!

Your other option is to create a playlist and use your software’s automix function – in Traktor, this is called Cruise Control! 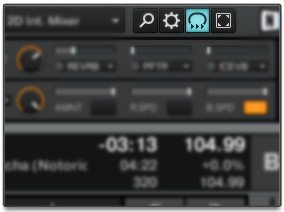 Traktor’s sweet Cruise Control Feature is turned on via a little button (pictured at left) in the top right of your screen. Once activated, it will automatically play through the tracks in the currently selected playlist. How it mixes between tracks depends on a few different settings.

The parameters you need to think about when building an automated mix playlist for Cruise Control are automatic mixing length (crossfade timing) and where you want the mix to take place in a track (Fade Markers).

This is the time that both tracks will be in the mix at the same time, or how long it takes to move from one track to the next. If you select a 60 second auto crossfade, it will take 30 seconds for the new track to come in and the following 30 seconds for the last track to fade out.

The style of music you are playing will determine what kind of crossfade you would like to implement. Maybe for Drum and Bass or Hip Hop, you might want an instant swap between tracks. For deep house, maybe a long smooth mix would be best. It’s your call, you’re the DJ.

(Additional Traktor Tip: Below the crossfade time, you can set the crossfade to be smooth or sharp. This typically is used to adjust the curve of a crossfader. A sharp fade means even the slightest move of the fader from an off position will instantly create full volume. A smooth fader creeps the volume in as you move it across, and will only reach maximum volume when set exactly in the centre between the two decks. This function does not currently operate in Cruise Control mode, which uses the line faders instead)

FADE IN AND OUT MARKERS

By default, Cruise Control uses the end of a track as the guide for initiating the crossfade. Taking our earlier example of 60 seconds, the crossfade will begin 60 seconds from the end of the track. If you have it set at 0 seconds, the new track will not begin playing until the track has reached its very end. Some tracks have a long silent audio tail, which might interfere with your Emergency Mix if you weren’t to set a different place to start your crossfade.

Using the Fade In and Fade Out markers, you are able to set at which point the auto crossfader will begin its work. These markers stand out from all others as they are orange in colour. They have a small flag at the top indicating whether it is an ‘In‘ or an ‘Out‘.

‘Fade Out’ Marker – Wherever you chose to place this marker; will be the point at which the next track in your playlist will begin to play and the volume faders begin to move – this marker is denoted by the flag sitting on the right of the marker.

‘Fade In’ Marker – When an auto crossfade begins, the next track in the mix will either begin at the start of the track or will jump to any ’Fade In‘ marker that has been placed in the track. As soon as the track starts up, the volume faders will also move; at the pace you have set in the ‘Crossfade timing‘ settings. This marker is denoted by its flag sitting to the left of the marker.

I recommend selecting three or more tracks to use for your emergency set – once you have selected these tracks and positioned your relevant markers, place them in a Traktor playlist. Now, whenever you need to take a break at the decks, you can head over to the playlist, load and mix in the first track from that list, then activate the cruise button.

Personally, I would only ever use this in a restaurant or bar setting, or even a house party, but I would rarely imagine using it in a club. However, it is handy to have!

Have you ever used this function? Would you use this function, or are you totally against doing this as you find it is ‘cheating’? We would love to hear from you in the comments.

This article was originally published by Alan on Traktor Tips.