As the little $20 DJ software that could, Algoriddim Djay has been stepping up its hardware support game. Two compact new controllers — Vestax Spin 2 and Pioneer DDJ-WeGo — natively support Djay with a sub-$350 price tag and then divert from there. The Spin 2 directly connects to iPad and iPhone, but only for Algoriddim products, while the WeGo broadens your horizons with Traktor and Virtual DJ support. 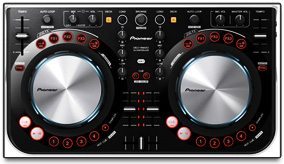 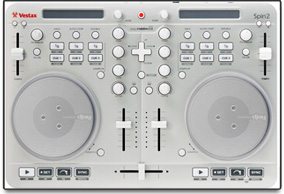 Even though both the DDJ-WeGo and Spin 2 come from DJ companies with an unimpeachable pedigree in constructing high-end, roadworthy gear, these compact controllers probably won’t escape the nagging “toy” comparison we often see leveled at controllers targeting a casual or beginner audience.

To be sure, both units are somewhat limited for their price. The Spin 2 only works with Apple hardware — Macs, iPads, iPhones, and iPod Touches — and Algoriddim software: Djay for Mac and iOS, and Vjay for iOS. A 30-pin connector cable attached to the back lets you plug in and charge Apple mobile devices directly, but only when the Spin 2’s included AC adapter is plugged in. (Another adapter, sold separately, is needed for newer iOS gadgets with the Lightning plug.)

[Editorial Update, Jan. 23, 2013: The Spin 2 only officially supports Algoriddim applications, and was reviewed as such. However, we can confirm that it can also work with certain other software and apps, but we do not assume it will work with everything the same way an open-ended MIDI controller will. Thanks also to our diligent readers who reported in the comments that their Spin 2 was working with Traktor 2.6, DJ Player 5.7 for iOS, etc.]

While Pioneer’s DDJ-WeGo thankfully supports MIDI over USB, it still officially only supports Djay, Virtual DJ, and Traktor Pro 2.6 with the use of a TSI file available on Pioneer’s site. And though the WeGo makes efficient use of its small surface area, it understandably can’t offer a control set on par with larger, more deluxe controllers. It does offer some wicked LED light shows courtesy of the jog wheels, which have to pull quadruple control duty to make up for other dedicated controls. 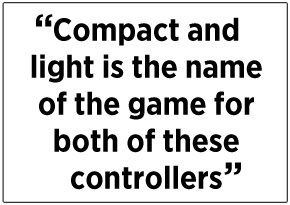 Compact and light is the name of the game for both of these controllers. As such, their mostly plastic constructions keep the weight down, but in exchange sacrifice a degree of the travel-ready toughness that so many other Vestax and Pioneer products are known for.

Control elements of both controllers mirror their predecessor. Neither company skimped on the touch-sensitive jog wheels, which on both units are very responsive, have great rotation action, and inspire confidence with their sturdiness. On both units, the knobs and faders feel solid, but I don’t think either one got the top-shelf buttons. It’s not that they feel cheap as in fragile, but the hard-clicking buttons on both controllers are neither the most effective nor comfortable for playing rhythmically.

Neither controller really trumped the other on build quality, but the WeGo’s body does feel slightly more stable, and it earns some brownie points for having five bottom-panel colors available: red, green, violet, black, or white. 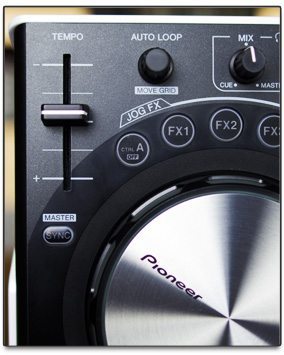 On the other hand, the WeGo relies on its brilliantly-colored jog wheels to carry the load for tweaking effects, scratching and track searching (via the Shift key). Five buttons above each wheel turn on various modes (including three effects and two controls variable by the software), and then the jog wheel adjusts the parameter for those modes. With the effects engaged, the wheels launch a multi-colored light display to let you know their function has changed. Effects can be triggered simultaneously, and the wheel will then adjust them all at once. It’s a clever system, and the jog wheel makes a great knob so to speak. The only drawback is if you get absent-minded and start to tweak the wheel when it is actually in scratch mode.

Another four buttons under the WeGo’s wheel set and trigger the cue points, as well as samples when in Sampler mode. These buttons feel ever so slightly more playable than the Spin 2’s buttons, and they are better placed under the wheel, rather than above them like on the Spin 2. 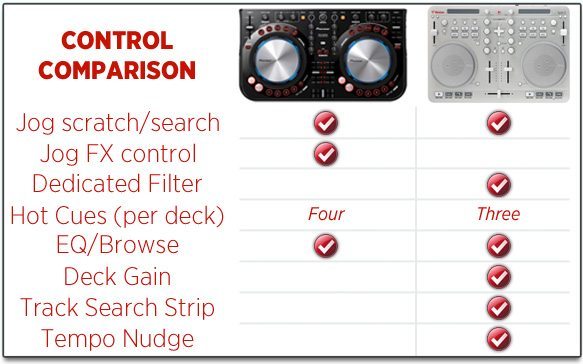 On the Spin 2, you only have 3 cue buttons per deck (on the hardware; the Djay software supports 6 per track), but you get more Bounce Loop and Instant FX buttons, which are feature specific to Djay. Bounce Loops trigger rapid-fire repeating loops when you hold down the 1/8, 1/4, or 1/2 buttons, and the track picks back up where it would be linearly when you release the button. These are fun to mess with, and with the Shift key, they launch Instant FX, which are short bursts of preset effects in Djay. 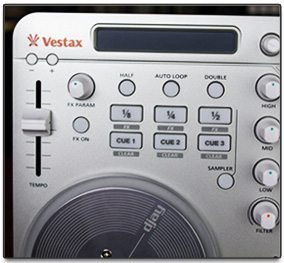 The Spin 2 also has a more flexible AutoLoop section of three buttons: one to activate/deactivate the loop, and one each to halve or double the loop length after that. The WeGo’s sparse looping section consists of a single push-button encoder that sets and adjusts autoloops or sets and adjust manual loops with the Shift key.

Another Spin 2 extra, two track-searching touchstrips sit above each deck section. Unfortunately, these don’t feel as precise in their searching as we’ve seen with other touchstrips. But it also feels as if the touchstrips are redundant, as track searching using Shift+jog wheel worked just fine. It seems like a wasted opportunity not to use the touch strips for some kind effects tweaking or blending instead.

One advantage the WeGo has over the Spin 2 is the ability to scroll through effects using the Shift+FX buttons. With the Spin 2, you have to select the active effects from the software. 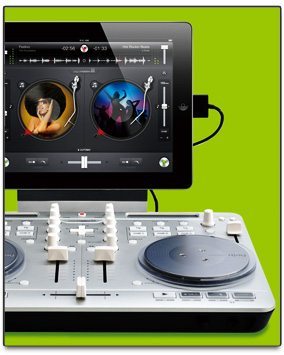 With its locked-down approach to the Spin 2, Vestax has gone full-blown Apple on our asses. The unit only works with Mac computers or Apple gadgets, and only works with Algoriddim iOS apps and Djay for Mac. We understand the argument for designing a closed hardware/software system to ensure lockstep compatibility between the two and a stable user experience. However, relegating a perfectly capable controller to a single company’s software just seems like a waste of resources, even for a big baller who can plunk down the $350 on a Discover card like it ain’t no thang. Probably some enterprising young evil genius could crack it, but that’s beyond the scope of this article.

Before this sounds too callous, we definitely respect the growing momentum for making mobile devices a legit platform for music creation and DJing. The Spin 2 is ahead of the curve there. If or when an iPad could carry your entire music collection and DJ software sophisticated enough for pros, migrating to tablets could be as natural as migrating from record crates to hard drives was.

In the here and now, a Spin 2 controlling Algoriddim Vjay for iPad sounds like a pretty viable option for running visuals at certain parties, where a VJ is often an afterthought or non-existent. Vjay has quietly become a powerful creative tool for live, tempo-synced visuals. The Spin 2 comes with a license for Djay for Mac. The iOS versions of Djay and Vjay are sold separately. 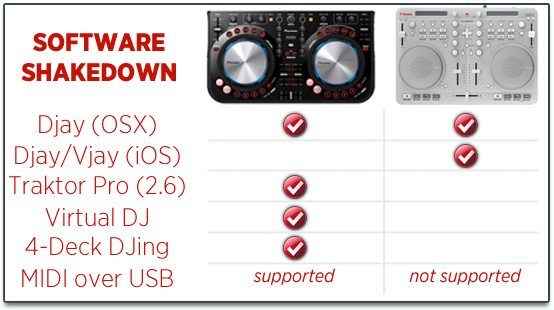 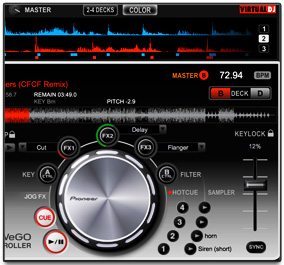 With the WeGo, you get a controller that seems about as compact as an all-in-one controller get without sacrificing too many options, 4-deck control, and MIDI-over-USB, although official software support for the unit is still limited. WeGo supports Djay for Mac natively and comes with Virtual DJ LE for Mac or Windows. (Virtual DJ Pro 7.2 also adds WeGo support with a custom skin, visible at right) With a downloadable TSI file, Traktor Pro 2.6 rounds out the supported WeGo software at the time of this publication.

The WeGo doesn’t have the same direct access to Djay-specific functions (like Bounce Loops and Instant FX) that the Spin 2 does, but it’s also the obvious choice of the two if you want to use it for anything other than Algoriddim software.

Both Vestax and Pioneer are staying vague about the audio resolution of the Spin 2 and WeGo sound cards, calling them such things as “studio grade.” For that reason, I’d guess that they are 16-bit, rather than 24-bit, but that’s just a guess.

Suffice to say, I noticed little remarkable difference between the sound of these units, aside from a bit of a beefier low end emanating from the WeGo. The WeGo also had slightly louder sound levels, although neither unit was ear-splittingly loud. You can use both the WeGo’s headphone outputs at once, and with no volume drop-off.

Just like a 2013 Hyundai will be more reliable than any car from 30 years ago, as components get less expensive and processes improve, low-cost sound cards today can (not always) sound just as good as the best of the best from 10-15 years ago. Both of these units sound quite good for the price. Using all the same cables as on the Spin 2, the WeGo introduced some noise and hum into my speakers that the Spin 2 did not, but nothing too drastic. It certainly wasn’t noticable once the music started pumping.

*The Djay software can use your Mac’s built-in mic or mic input to record samples.

While this is not a review of Djay, let’s look at the prospect of using it to DJ. It continues to add performance features, such as multiple effects and looping panels that neither of these controllers can match 1-for-1 on a hardware-to-software basis. It offers slick iTunes integration, tempo detection and beat matching, key detection and key matching, browsing of songs according to the Circle of Fifths, rudimentary effects and sampler, and a visually pleasing interface—all for $19.99 on the desktop. 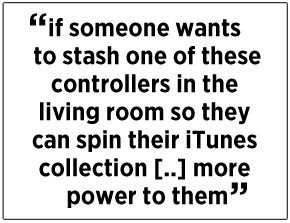 Sure, it’s basic; sure, the manuals and marketing materials say things like “anyone can DJ!” Well, can’t anyone DJ? Of course they can. To be really good, it helps to practice… a lot. But if someone wants to stash one of these controllers in the living room so they can spin their iTunes collection on a Friday night, more power to them. (And if they want it to look really cool in the dark, I might recommend the WeGo.)

While little, these all-in-one controllers pose big differences to prospective buyers. They both natively support Algoriddim’s Djay, with the Spin 2 adding some dedicated controls for Djay-specific functions. If someone imagines that Djay is all they’ll ever want out of DJing, and particularly if they want to use it on an iPad or an iPhone, the Spin 2 is probably the way to go.

With the Pioneer WeGo, you lose the direct iPad/iPhone connection, but you gain: a more feature-rich software in Virtual DJ LE, compatibility with Traktor Pro 2.6, a slightly more playable control layout, a slightly louder and more bassy sound, and—wait for it—pretty lights! Overall, it probably gives a DJ more room to grow and expand a setup and a mixing skill set.

Markkus Rovito is the DJ TechTools technical editor. Want him to review some gear? Let him know in the comments or on his Twitter.

Review: Pioneer DJ SQUID, a creative sequencer to bridge the…