Storytelling In A DJ Mix

Stories are a staple of the human experience – from Homer to Dr. Seuss, the greatest storytellers have inspired us, taught us, and even pushed us into action. DJs often want to become something more than just a request-based party-rocker, but as musicians and artists in their own right. Today we dig deeper into the art of DJing and explore how being a better storyteller can dramatically enhance your sets. 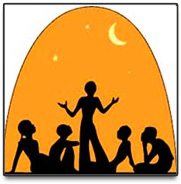 It’s important to first understand the difference between what a story is and what a story does. The most gripping stories aren’t just written or told, they are throughly designed with the audience at its forefront.

The key word here is meaning. A good story is designed in such a way to make us empathize with certain point of views and thus change the way we perceive the world around us. Stories, as a result, are merely mechanisms of delivery, crafted in such a way to develop an intrinsic sense of meaning through emotion and metaphors.

We can look to the world of advertising as an industry perfecting the power of the story. Advertisers and marketers use stories to inspire emotions and ultimately bring wallets out:

This tearjerker of an ad not only displays Google’s search feature set (e.g. instant search, query auto-correction, integration with other Google services), but it also works to establish an emotional connection with the viewer through a carefully constructed narrative on love.

WHAT’S IN A STORY?

Now that we understand the power and weight of stories, how exactly can we, as DJ’s, harness it? Mechanically, a story can be described as a byproduct of the following narrative elements.

These building blocks are used by storytellers to add depth and meaning to their stories. They don’t stand alone – these elements influence and feed off of each other. The characters in your story, for instance, are influenced by their setting in the same way that your story’s overall pace is determined by it’s underlying plot.

Let’s start with the plot. The plot is the overall collection of events that happen within the confines of a story. A strong plot serves as the foundation for allowing your audience to understand where you, as the storyteller DJ, are coming from and what themes or motifs you wish to explore.

Ean’s above recent mix is a strong example of this. Read the description he wrote prefacing the mix:

Over a year ago, one of my closest friends in the world and an amazing DJ, Solomon, was killed in an accident on tour in Thailand. This past new year, I traveled with his family to Mexico where we sailed out into the Pacific Ocean and spread ashes. On the way there and back, I was deeply inspired and DJ’d from the roof of a large caterman to 30 close friends […] If you can, while listening, try to imagine yourself gently flying across the ocean at sunset with a strong breeze at your back and only ocean ahead. Good recordings capture moments – and this was certainly a special one.

Even before listening to the mix, the backstory creates a sense of personality to the experience, helping to establish a personal connection to not only the track listing, but also the friendship between Ean and Solomon.

A Plot Is Only As Good As Its Opening: Your story needs something that allows the audience to immediately connect to what you are trying to say. Open your mix with a hook to get people curious, something that draws attention to what you’re about to do.

In the video above is Flying Lotus at a packed 12am show at Le Poisson Rouge in NYC. He opened up his set by inviting the crowd to listen to his story with ambient synths and faded percussive elements. This introduction worked to serve as a precursor for the spaced out style of hip hop he’s best known for. 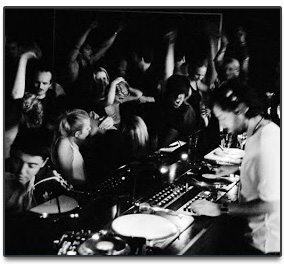 Every plot is surrounded by context.

From the DJ’s perspective, one of the most important things to be conscious of is the environment in which you’re playing. Before going on stage, take a minute to soak in the details. Look around you, take note of the clothes people are wearing, the drinks people are drinking, the smoke in the air, and the venue where you will be preforming. Take a look at the clock, strike up some conversations. These specific characteristics will help you in pinpointing the overall vibe of the show.

If you’re about to tell an entire audience of people a fantastic, meaningful story, you better be prepared to figure out how exactly you’re going to explain it to them. You might have a list of tracks ready to go, and while you appreciate those tracks you dug up, it doesn’t necessarily mean others will.

PRO-TIP: To avoid this, instead of thinking “Why don’t these people like my tracks?”, think of it more like “How might I introduce these tracks to people? How do I make them ‘get it’?”

Your surrounding environment will ultimately drive the intensity of your set.

This is one of the hardest aspects of being a great DJ. It’s common for inexperienced DJs to overlook social cues, selecting tracks without taking context into consideration. More often than not, this leaves DJs to fear silence, gravitating towards harder, more abrasive tracks that might make show-goers feel uncomfortable. Being in control of the time that you have makes you appear confident and makes people take notice.

To avoid rushing your sets, relax! 40 or 50 minutes is much longer than you think it is. Make it a point to glance at the crowd every now and then to get a read on how they’re reacting. Additionally, it might also help to think of your entire set before actually even finishing it. A story chart like the one below might help you in designing your set: 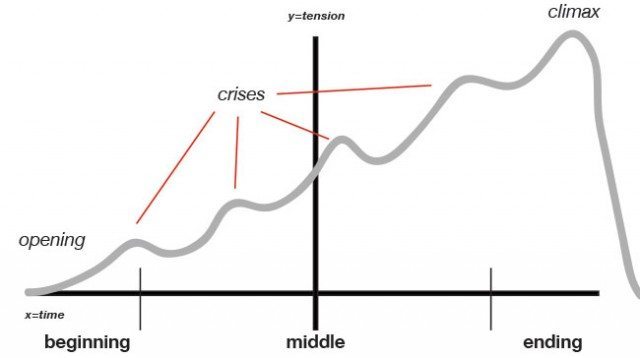 You have a defined opening, a catchy track, or sound clip that gets people’s attention, a few more tracks that build the overall intensity of your set, and a track that you feel is the pinnacle of intensity before you begin to wind down. While this certainly isn’t how all sets are going to look, this graph serves as a good starting point for understanding the dynamics and mechanics of a well thought out set.

Bonobo’s Boiler Room set from last year is a great example of a DJ being patient and setting the pace for the night. He’s not afraid to start slow, but at the same time, he makes it a point to slowly raise the intensity of his tracks throughout his set. The audience is responsive, comfortable, and having a great time.

Stories are driven by the characters within them.

From the DJ’s perspective, think of each one of your tracks as being individual characters having distinct personalities. Some may be outspoken and loud, demanding all of the attention, while others are more subtle in their approach. It’s your job as the DJ to position them accordingly.

Four Tet does a great job in his sets in understanding the personality of his tracks and playing to their strengths. In this sense, when looking for tracks, avoid looking at only their genre or sub genre. Two “deep house” or “dubstep” tracks, even if they share the same BPM, won’t necessarily go together. Listen to the small details within the tracks, types of percussion used, vocals, various effects and you might find yourself exploring other genre’s or even revisiting older tracks with a similar vibe (if you haven’t already).

The development of a narrative thrives through the interaction between characters.

In addition to embracing diversity within your tracks, be keen to taking into consideration how they might sound when played together. Understand that your tracks are saying certain things, laying a foundation of emotions and ideas throughout your story. However, when two tracks are laid on top of each other, their juxtaposition might carry on an entirely new meaning.

What kind of [tracks] give the [set] its appropriate rhythm?
– McCauly & Landing, Technique in Fiction

A while back I played a set featuring Amazing and Wonderful by Peaking Lights overtop of Artwork’s Rank. These two tracks combined created a sound that is much greater than the sum of its parts. It spotlighted Artwork’s use of deep bass and heavy percussion while letting Peaking Light’s washed out vocals and dub delays seep through. The juxtaposition changed the personality of the original songs, yet it allowed room for the next song to play out.

PRO-TIP: When you’re selecting the tracks for your next set, think not only about how they sound alone, but also how they might interact with each other.

For those that rely on visuals during their set, they too are an important part of your story’s dialogue. Images and colors deliver meaning, especially when coupled with sound. That in mind, visuals should serve as a metaphor for the sounds that you are playing and the story that you are telling.

Take a look at this set by Alva Noto. His visuals match up with a chaotic barrage of blips and bloops that make up his tracks. The visuals create a different context through which to experience his music. All of a sudden, his tracks aren’t so chaotic any more, in fact they have been organized by his visuals, providing an alternative, yet relevant communication of his story.

I created this guide for you all to further understand the art of a narrative DJ set (because it truly is an art). My hope is that you’ll take my advice and come up with your own unique system of storytelling for your next set!

Think you told a good story through your DJ set (or a favorite one you like to listen to)? Post it in the comments below!