Anyone who has seen Star Wars knows what a laser sounds like as it blasts through space and decimates your enemies, and likely everyone reading this has heard a producer or DJ drop a laser sound into a mix or song. As with most noises, it’s way more fun and original to make your own from scratch – learn how in this tutorial from Mad Zach!

WHY USE LASER NOISES?

Lasers are an invaluable tool for any producer or DJ. Sprinkle them over your mix, use them to intensify builds, or integrate them into a track to give it a bit more cyborg hype. Like any powerful weapon, it’s important to wield responsibly, however, irresponsible laser usage is also highly encouraged! Lasers seem to fit in nicely over just about anything, even a finished track, which makes them one of my favorite things to layer over a finished track to add a bit of “live” flavor.

It’s also worth noting that as a generation raised on sci-fi classics like Star Wars, and video games like Halo, people just seem to have this bubbling nostalgia and relationship with laser noises. It’s like an insider’s club that spans an entire generation.

A few things to look out for:

Because lasers often occupy very high frequencies in your mix, it’s important to keep in mind that they can sometimes become piercing and painful to those in your crowd who have not yet lost their hearing. To minimize risk of extreme pain for your audience, I recommend throwing a 12dB low pass filter after your lasers at about 13k.

Obviously I cover all of this in the video above, but just as reinforcement, you’ll need a few basic elements in order to make a laser noise (no matter what DAW or synth you’re using). If you have these four elements, you’ll be ready to blast your foes out of the sky: 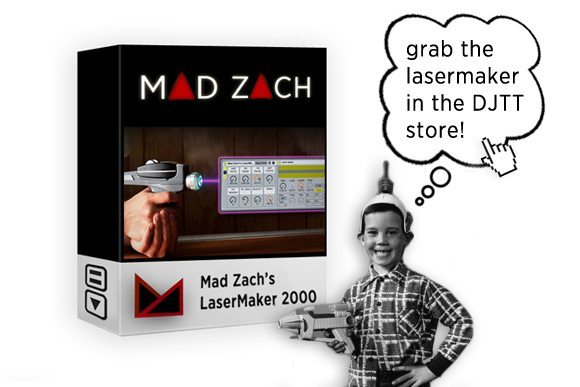 In celebration of, well… lasers, I’ve created what I’m calling simply, “the LaserMaker 2000” which you can now pick up in the DJTT store. In addition to over 50 mind-bending laser and sci-fi sounds, the LaserMaker 2000 is an absolutely insane Ableton instrument for creating your own laser noises from scratch. With 8 hyper expressive macros, this thing is truly ready for battle.

Watch this video I put together showing it off:

How To Sample Vinyl Records To Build A Soundpack