At NAMM this year, we saw no new DJ hardware from Novation – no Twitch 2.0, no Nocturn refresh – instead they’ve focused on the production side of things. Novation’s entries into the iPad software/hardware market, the Launchpad and Launchkey apps, explores a modular kind of system where the apps can work separately, together, or seamlessly with connected controllers. There’s much to dig into, click to read on.

The Good: Free apps integrate seamlessly with the hardware controllers. Great sounds from both the Launchpad sample pack and the Launchkey synthesizer. The two apps sync to each other and run simultaneously. Very short learning curve, just practice makes perfect.

The Bad: No in-app recording. Switching between apps with four-finger swipes often results in unwanted changes. No WiFi connection between the iPad and the controllers. Powering a controller off the iPad and using these two intensive apps simultaneously drains the battery fast.

The Bottom Line: Novation has created a miniature iPad music studio that benefits from connecting a hardware controller to create options for the user to decide when the touchscreen or hardware works best. Because the apps are free and the controllers stand on their own, this new synergy is bonus to users to decide how much or little to do with them.

THE LAUNCH OF NOVATION IPAD APPS

However, the next layer of the onion involves you hooking up the apps to their hardware counterparts of the same name. Both the Novation Launchkey keyboard controller and Launchpad S button controller interact directly with the apps when connected to an iPad via Apple’s Camera Connection Kit. The controllers are USB-powered from a computer or an iPad, and in fact they must be hardwired to the iPad to work; no connecting over WiFi.

Own an iPad and don’t have have these Launch apps? You  might as well download them right now for free, then read on and decide if pairing them with their economical hardware controllers makes sense for you.

It mimics the look and some of the functionality of the Launchpad S hardware controller, the Launchpad App is a different beast. One might think that it would be a wireless controller, but in fact, it’s a loop and one-shot sampling machine that lets you quickly create music beds of up to 8 tracks, each with volume, and filter controls. There’s also a selection of 16 stutter and LFO filter effects that apply to the master output.

From the home screen, you can start a session with one of eight templates – Breaks, Drum & Bass, Dubstep, Hip Hop, House 1/2, Tech House, and Trance – and set the tempo from 60 to 240 BPM before launching the session. The template determines which of the samples from the included Loopmasters sound pack are used for the 48 virtual pads. There are 369 total loop and one-shot samples included, spanning drum & percussion loops, bass, lead & melodic synths, and a few acoustic instruments.

Using the Edit button, you can tap on any pad and change its sample with something else in the library, or create and name entirely new templates from scratch. When editing the pads, a Sample Library window pops that lets you preview the samples before adding them. If you need more source material, there are currently three more Loopmasters sound packs available as in-app purchase for $2.99 each: Downtempo, Dirty Electro House and 24 Hours of Techno. A new feature letting you import your own samples is supposed to be added soon.

Two different pad views – Sample and Trigger – are available at the top of the screen. The Sample view shows you the name and type of each sample on the pad, for example, “Vocal – Witch Voxter” or “FX – Reverse Suck”. The Trigger view shows whether a sample is a one shot, or a loop that starts and stops on the bar, the beat, or instantly. Both views are useful, but it felt like all of that information could be displayed in one consolidated view instead.

To make some music happen, you just need to start tapping some buttons to launch loops, layering as many of the 8 tracks at a time that you want. Each track has 6 slots of samples. The round side buttons bring up level faders for the filters and volumes of each track, or the FX button brings up 2 rows of effects options. There are 6 buttons for stutter effects of different timings -1/8, 1/4, 1/3, 1/2, 3/4, or 1 beat – and 10 buttons for LFO filters of different timings from 1/4 to 8 beats. These buttons affect the master output for as long as you hold them down, and you can activate one stutter and one filter effect simultaneously. You can also hold down more than one effect type button at a time and toggle between them as you lift a finger.

A straightforward, yet high-quality synthesizer, Launchkey App comes with 80 patches divided into a healthy mix of synth leads, basses, keyboard sounds, evolving pads, sound effects, and arpeggiated sounds. There’s a graphic keyboard at the bottom with octave buttons to scroll the notes through a full 88-note range. 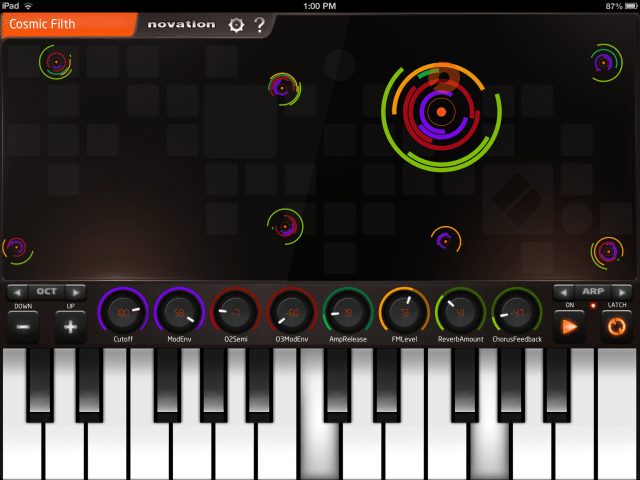 However, the real sound-shaping fun of the synth happens in the top half of the screen, where several Nodes and a Control Point hover over the keyboard. The Nodes essentially control a certain amount of the available synth patch parameters, each one controlling a different mix of parameters in various amount. As you drag the Control Point around in space, the Node it is closest to become a bigger influence on the sound, and the changes reflect on the values of the 8 knobs below.

Nodes and Control Points allow you to change all 8 parameters at a time in ways you could never do with just two hands-on physical knobs.

Some patches are programmed to arpeggiate by default, but you can turn the arpeggiator on or off for any patch. The Latch button continues the arpeggiated sound even when you take you finger off the keys, making it easier to make changes to the sound parameters. The remaining controls let you change the tempo of the arpeggio and adjust the master volume.

DANCEY DUO – BOTH APPS TOGETHER

Novation made these two apps to work simultaneously and to sync to each other if you choose. With the two synced, you can move back and forth between the apps and create a very full wall of sound.

The Launchpad App’s master effects do not apply to the Launchkey App’s sounds. It would be really cool if Novation added the ability to create some kind of note sequence in the Launchkey App. The synced arpeggiator worked flawlessly for us, but if you switch back to the Launchpad to make some changes, you’re stuck with whatever one note is playing in Launchkey.

All that performance comes at a cost of processor and battery power, however. The only iPad requirement is iOS 5.0.1, but on an iPad 3 running just these two synced apps, the processor was taxed; it ran very hot. And even with a charging cable plugged into an AC outlet, the battery level slowly but steadily lost one percentage point about every 5 minutes with the volume at 50%. With the charging cable disconnected, it drained a percentage point about every 3 minutes, and with a controller connected running off iPad power, it drained faster still.

THE HARD LAUNCH – CONNECTING A CONTROLLER

With a Launchkey (25-, 49-, or 61-key versions) connected to the Launckey App, you can use the hardware keys to play notes, and use the hardware knobs to control the app’s knobs. A hardware button switches to the other app instantly and easily.

Connecting a Launchpad S to an iPad means a full button grid for all of the Launchpad App’s 8 x 6 sample pads, as well as the two rows of FX buttons. So even if the volume or filter faders are up in the app, you can still launch the FX and pads that are hidden on the app using the hardware. That’s an advantage over the Launchkey keyboard, which only lets you access two rows of Launchpad buttons at a time.

If you’re deciding which controller would be better to use, it probably comes down to which app you think you’ll use more, as each controller gives you more control over their respective apps.

The Launchpad S ($220 MSRP) has made only a few changes from the original Launchpad of four years ago. Besides being able to connect to an iPad,  it has a much faster refresh rate and much brighter buttons (dimmable if you need to save power). There are also some incredibly large and grippy orange rubber feet on the bottom, that provide about all the tabletop traction you could want. The Launchpad S comes with Ableton Live Lite 8; it integrates with Ableton Live and Image Line FL Studio; and it’s MIDI class-compliant for other software.

The Launchkey controllers present a really great MIDI keyboard for the money. Although their construction and components noticeably sacrifice a bit of the high-end, sturdy quality of Novation’s Remote SL line of controllers, the three

The Launchkey utilizes Novation’s new InControl protocol for DAW control, which includes custom communication with Ableton Live, Propellerhead Reason, and FL Studio. It uses Mackie HUI control for other DAWs and can switch to standard MIDI for other software and plug-ins. It comes with Ableton Live Lite 8, the Novation Bass Station and V-Station synth plug-ins, and a pack of Loopmasters sounds.

COMING IN FOR A LANDING

By now, we’re all so sick of the word “launch” that we could lose our lunch- but don’t let that stop you from checking out this new direction from Novation. At the very least, any iPad owner should give these apps a look, because they sound great, they provide instant results along with some creative avenues, and they’re free. The hardware units hold their own as MIDI controllers for computer software regardless of the new iPad integration – the connection to free iPad apps just greases the wheels a bit.

It remains to be seen how practical this controller/iPad synergy will really be in performance or studio situations, but this budding ecosystem clearly has potential.

Markkus Rovito is the DJTT Tech Editor. Want a piece of software or hardware reviewed? Let him know in the comments.