You discover a deep cut from your parents’ record collection and decide to get your digital scalpel out to remold the track for a DJ set. The new version is a hit, the audience rushes the booth asking for the name of the remixer. Congratulations – but are you ready to face the legal challenges of licensing a track for a remix? This is what Legitmix hopes to solve – by creating a new paradigm for the use of copyrighted material.

Essentially, Legitmix makes the sale of bootlegs, remixes, edits, and mashups legal by requiring the purchase of the original tracks. Many of you will be familiar with DJ Earworm’s mashup work, so we’ll show one of his latest releases as an example: 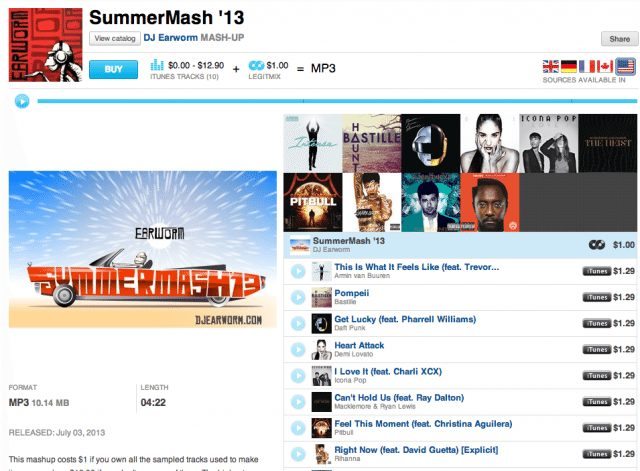 To buy the Earworm mash-up, listeners + DJs must first download the Legitmix proprietary software. This software scans your music library to determine if they have the original tracks used in the mix before letting them purchase a ‘Legitmix file’. The software then uses this file to recreate the remix and produce a DRM free MP3 that can be used in iTunes/Traktor/Serato/Rekordbox.

How does LegitMix reproduce the Earworm mash-up? The software apparently calculates the “binary difference” between the original material and the mash-up – meaning that they’re looking at the music files as pure data that can be spliced together legally – as long as all of the parts are legally purchased.

We spoke with co-founder and CEO of Legitmix Omid McDonald who told us,

‘A Legitmix file is not music and can’t be used on its own to create music. A consumer, using our software, can download the Legitmix file and use their copy of the sampled source tracks to recreate the mix for their personal use. Our software can search the consumer’s computer for the source tracks. If they don’t have them, we send them to iTunes to buy them, thereby getting the original artists paid. By creating a marketplace for remix, we aim to legitimize the large amount of bootleg material that’s currently benefiting neither remixers nor the artists they sample.’

As a producer, create your own profile and when you upload your own work, the site will ask you to specify the tracks you have used, or ‘Sources’ (sound familiar? Beatport’s Mixes has a similar process). You provide links to online stores where the sampled material can be purchased (iTunes seems to be the preferred vendor). The website creates a ‘Legitmix File’ for your release, you set the price of the remix (free is an option).

70% of the proceeds from the sale of your Legitmix files come back to you. In the next steps, you are asked for some copy about your upload, along with tags to make your work searchable, ‘Disco Re-Edit’ for example, and it also allows you to upload artwork and schedule a release date. From then on you can use the dashboard feature to look at your vital statistics such as plays, shares and purchases.

Usually, the moment you start sharing your remixes you’re technically breaking the law. The ‘not for profit’ angle simply won’t work if your remix gets noticed. This lesson painfully was learned by Julio Bashmore last year when he faced legal action for his use of a Jimi Castor Bunch sample on his free giveaway ’Troglodytes’ which was posted on Soundcloud. The rights owners claimed that Bashmore was using unlicensed samples to further his own career. He was forced to take down the track, pay an undisclosed fee, and issue an apology.

I asked Omid how safe DJs and remix artists are when using Legitmix:

The Legitmix legal model has been vetted by several top copyright experts, so we’re confident of our position. More importantly, Legitmix is designed to benefit copyright holders, so we’re also confident of our moral position and business model. We’ll defend our users against any claims against their use of the Legitmix software provided they properly identify the source tracks used in their mix.

Too Legit To Quit? What We Like About Legitmix:

The future of Legitmix depends on acceptance by the DJ community as both consumers and content creators. Some high-profile artists have already shown support for the model, with Diplo uploading an exclusive Mad Decent album to the site, and DJ Ayres becoming a regular contributor. I asked Omid if the project in beta was a way to build a product that can be sold to Apple and used by millions of iTunes users:

‘It will be great if one day Apple would integrate our technology so people could buy remixes of the tracks they purchase from iTunes. We’ve got a lot of work to do before that happens but we believe that providing a way to reuse music where everyone benefits is a worthy endeavor.’

If adopted by more DJs, the model could become an established part of how we search for new music and interesting remixes. Legitmix is clearly a remarkable new venture, which has the potential to offer great rewards for artists usually restricted by tough copyright laws.

Check out Legitmix on their site.

Do you think you’d use it for a release, or have you already? Let us know in the comments below.

How To Create A Custom DJ Tempo Transition Track