Options For Tinnitus Treatments (For DJs Who Already Have It)

If you’ve been to a few too many loud DJ gigs, you might have started noticing that familiar-yet-terrifying ringing in your ears that plagues DJs and music lovers around the world. How can people who suffer from tinnitus start to treat it? Today, Peter Phua (M.D.) takes a look at the top options available for treating tinnitus – there’s no cure yet, but learn about the promising options inside!

Tinnitus is a medical condition that every DJ should be aware of. It is the perception of sound in the absence of any external auditory input, and anecdotal evidence strongly suggests that DJs are at high risk. Although there are many possible causes, the most common cause is noise induced hearing loss. Due to noise exposure, hearing loss is overwhelmingly the cause of tinnitus among DJ’s. Most commonly, it’s described as a “ringing” in the ears that never goes away. There are many variations of tinnitus tones and the volume of one’s tinnitus tone can vary dramatically.

Disclaimer: Although this article is written by an M.D., it does not constitute medical advice. Speak to your doctor about your tinnitus and tinnitus treatment.

LOSING YOUR HEARING (AND MIND)

Why should DJ’s care about tinnitus? Simply put, the condition can have severely debilitating consequences for a person’s quality of life – and even ability to perform ( louder tones drown out the perception of other audio, and also correlate to hearing loss). Having a constant, inescapable noise in your head can cause serious psychological distress. Tinnitus has been associated with anxiety, depression, and a reduction in short-term memory – thus many patients are keen on seeking treatments for it. A famous anecdote claims Van Gogh attempted to cut his ear off due to tinnitus, and if you have it, you probably know why.

Here’s the first thing you need to know about the state of tinnitus treatment: there is no scientifically accepted cure. What does this mean, specifically? Basically, the medical community has evaluated the literature on scientific experiments on tinnitus treatment, and has ruled that there is insufficient evidence to definitively point to any particular treatment as being effective in completely eliminating tinnitus. What there are, however, are some promising therapies that could work, but more research needs to be done to make a definitive conclusion.

One very important thing to take into consideration when evaluating medical claims is the hierarchy of evidence: where findings from stronger studies are accorded more weight than findings from weaker studies (for example, a grouped analysis of many experiments on a particular treatment is held in higher regard than any single one of those experiments).

The tinnitus treatment space is flooded with scams or treatments that are based on little to no evidence. These include ebooks claiming to hold natural cures, sprays, and “homeopathic” regimes (which are nothing more than diluted water). The remainder of tinnitus treatments are based on a varying amount of scientific evidence, with varying degrees of strength.

The following treatments are treatments for sensorineural tinnitus (tinnitus caused by hearing loss, or a deprivation of sensory input from damaged hearing cells). Another important qualification: not all of these treatments lower the volume of your tinnitus – some just reduce the distress associated with it.

The purpose of tinnitus retraining therapy, or TRT, as it is widely known, is to enhance the brain’s habituation response to the tinnitus tone. Basically, habituation is a process whereby your brain “gets used to” a perception, and becomes minimally affected by it. TRT is intended to help this process along, and reduce the psychological consequences of tinnitus. It uses a combination of counselling sessions and usage of a low-level background noise generator, which is meant to “train your brain” to ignore sounds that are constantly present. This therapy typically requires that one goes through an audiology clinic, and can cost several thousands of dollars.

Effectiveness: It does not lower the volume of your tinnitus, and has generally been found to be moderately effective in decreasing the psychological harm of tinnitus.

Tinnitus masking is similar to TRT, however relies exclusively on the usage of background noise to “mask” or “hide” the tinnitus tone. Tinnitus masking, like TRT, has been shown to have efficacy in reducing the psychological harm from tinnitus, but similarly, does not reduce the volume of the tinnitus tone. Tinnitus masking can actually be done relatively safely by yourself, in that you can simply listen to free masking sounds downloaded from the internet through any MP3 playing capable device.

Effectiveness: It’s been shown to be moderately effective.

Meditation has been an under-publicized treatment option for tinnitus since the research on it is relatively new. A variant of meditation known as Mindfulness Based Stress Reduction has shown good efficacy in one experiment in reducing the distress associated with tinnitus. It’s definitely something worth trying out, given that it’s something one can do entirely on their own (meditation has a host of other health benefits and has been shown to cause beneficial changes in the brain that reduce anxiety and stress).

Currently, there is not enough evidence to recommend any specific drug as a medication to lower the volume of tinnitus. There is some promising evidence that a benzodiazepene class drug, Clonazepam, may have some efficacy in lowering the volume of your tinnitus, but more research needs to be done. A popular “natural” remedy called Gingko Biloba has been definitively shown to be useless. The other medications used to treat tinnitus are primarily meant to alleviate the effects of tinnitus without lowering the tinnitus tone’s volume. An older class of antidepressants referred to as tricylics has not shown significant benefit in treating tinnitus associated distress.

Sound therapies are forms of treatment that claim to reduce the volume of your tinnitus tone with specialized sounds, usually customized for the individual patient. The  problem is that nearly all of the studies in this space have been funded by the same people who are trying to sell them. Those that haven’t been funded by companies have often been developed with the eventual aim of commercializing the particular sound therapy, so it’s not clear how much of this research has been purely academic. For similar reasons, scientists view drug studies funded by drug companies with suspicion (because it’s an obvious conflict of interest from a scientific perspective).

For example, all the evidence in favor of the efficacy of Neuromonics, a sound therapy proprietor, appears to have been funded by the company itself. Some studies have shown promise, including a sound therapy called Acoustic Modulated Reset Therapy, and another sound therapy referred to as S-Tones.

The common thread behind the aforementioned treatments is that they generally have a high cost (neuromonics costs thousands of dollars) and require a proprietary device (which appears to be nothing more than a proprietary audio player, a way of inflating the cost of treatment).

Some studies have shown that Notched Music and Notched White Noise may have some efficacy in lowering the volume of one’s tinnitus tones. The Notched Music studies appear to have no commercial affiliation at this time – but the authors behind the Notched White Noise studies could attempt to commercialize their treatment in the future. The primary advantage of Notched Sound Therapy is that it is significantly more affordable than competing sound therapies (as it does not require a special device). 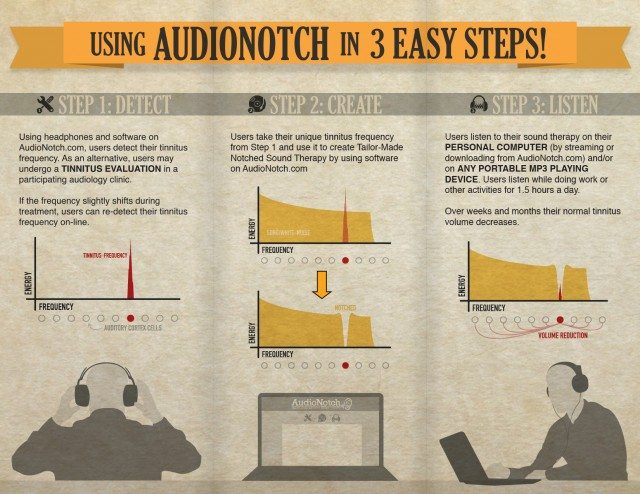 There are some promising avenues of research that may result in a total tinnitus cure. Stem cell research is probably the most promising candidate. In my discussions with a leading academic researcher on tinnitus, in cases where people have tinnitus from hearing loss, a restoration of the peripheral input from the ear by replacing dead or damaged hearing cells, would, in theory, eliminate the tinnitus tone. This is an extremely challenging scientific problem, and one that is many years away from clinical application. The key message, though is one of hope: our scientific understanding of tinnitus continues to progress, and although a total cure is not yet here, it is on the horizon.

Have tinnitus and found a good way to help lessen the pain? Let us know in the comments below.

What You Need To Know About Protecting Your Hearing