Pioneer’s new powerful external effects unit, the RMX-500, comes in at a much lower price than the RMX-1000. Today, guest reviewer Mojaxx takes a close look at the unit, demonstrates all the features in a video, and offers his perspective on if Pioneer’s new kit is worth picking up.

The Good: Smaller, lighter and cheaper than the RMX-1000. Connection ports on the side should help it fit into tighter setups. Completely ‘playable’; the hands-on control offers instant fun, with many ways to get out of trouble if it all goes pear-shaped. Built-in audio interface and headphone socket are actually a significant improvement over the 1000.

The Bad: Still a serious investment, especially if you use software has similar effects built in. Real-time BPM analysis is among the best on the market, but still not flawless when playing music without four-to-the-floor kicks.

The Bottom Line: Dedicated hardware effect units for DJs are still few and far between, with Pioneer’s previous models the only ones ever likely to be found installed in booths around the world. The RMX-500 stands comfortably along the much more expensive RMX-1000, besting it in many ways, and for only half the cost. There is very little else on the market which offers such high quality (and easily repeatable) effects.

Watch an overview of the unit in this video, then read on for a full review: 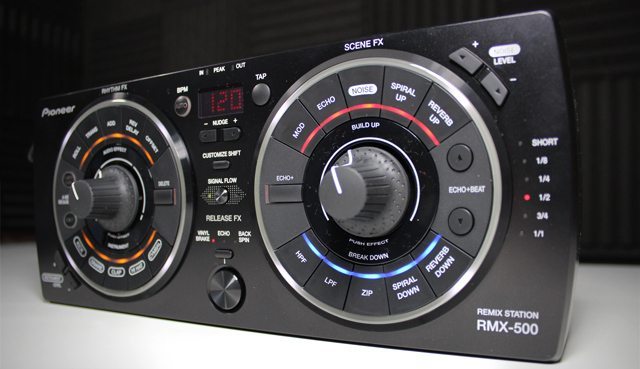 The RMX-500 is a standalone effects unit designed to integrate into an existing DJ setup. It has RCA input and output connectors on the side of the unit, with a 3-way level switch to allow it to work at a suitable level whether hooked up to a mixer’s send/return loop, the master output of a controller/mixer, or (if you can afford more than one), directly between an audio source and the mixer.

IO connectors are now on the side, a welcome improvement over the 1000. With such hands-on controls, it can feel unnatural to require the unit to be placed above and behind your other kit, as the rear-mounted connections on the RMX-1000 effectively dictated. With the 500, you can place it in front of your mixer, deck, or controller, and have much quicker access to the controls. You’re also less likely to need to invest in a stand for it.

The 500 lacks the ¼ inch jack input/output sockets found on the RMX-1000, really no loss as  those were not actually balanced TRS jacks anyway. Functionally, there’s no difference – it’s perhaps an annoyance, as most mixer send/return loops use jacks, including all of Pioneer’s – but at worst you’ll need some new cables or adaptors.

While largely constructed from plastic, the RMX-500 still feels like a solid piece of gear. The build  screams pure ‘Pioneer’, and although that might not be to everyone’s taste, there’s no denying that their equipment hold its own well enough under the rigors of hard DJ use.

The two large control knobs are the main way to interact with the unit. On the left (Rhythm FX) they control the time/beat parameter, whilst on the right side (Scene FX) they usually control time and the actual depth of the effect. In terms of the knobs themselves, the large size, rounded profile, and rubbery finish feel great, but due to the secondary function requiring a degree of vertical travel, they also feel rather spongy, with a fair amount of play in all directions.

The effects found on the RMX-500 are all very high quality and extremely intuitive to use, especially if you’ve used any of Pioneer’s FX units or mixers before.

On the left hand side is the Rhythm FX section, which features a number of beat-wrangling effects in the top half: Roll, Transform, Add (a multi-tap delay), Reverse Delay, and Offset (a kind of beatmasher). They sound great as long as the BPM is locked in tight to the track (more on that later), and have a secondary modifier, the depth of which is activated by pushing in the large control knob. This can can enable some pretty awesome-sounding variations with just one hand on the dial.

At the bottom left side of the RMX-500 are the Instrument FX. These are five drum sounds (kick, snare, clap, hat, cymbal), which with one touch will loop in time with your tracks. The rhythmic pattern and timing is adjusted with the main control knob, and the secondary ‘push’ functions apply here too. The volume of the instrument effects has a dedicated control just below them, for adjustment against the level of your incoming audio.

Instrument FX need to be activated on beat – the automatic quantizing in the unit doesn’t seem to want to place, say, the kick sample on the ‘one’. You can of course stop it (using the delete button) and start it again, or use the BPM nudge function, but that’s a hassle.

The BPM detection is up to Pioneer’s usual standard – very fast and accurate for four-to-the-floor house or techno, but still struggling to deal with more off-kilter beats like those found in hip-hop or breaks. Designate the BPM manually, either by tapping, or with a combination of holding the tap button and others. As with the 1000, it’s disappointing that Pioneer hasn’t decided to give the RMX-500 the ability to read a MIDI clock signal (from Traktor, for example).

The 4/8 beat loop recorder is the main area of the RMX-500 that we suspect James Zabiela had a hand in designing. When using the instrument FX in ‘standalone’ modes, you can only use one at a time, but the loop recorder allows tapping out of patterns containing as many sounds as you like, overdubbing as you go. When combined with the Rhythm FX, which can also be added to that sequence, there’s serious potential for wild, on-the-fly creations. Undo the addition of a sound or effect with the delete button to clear just that element.

The release FX of the RMX-1000 have been carried over to the 500, albeit in a slightly simplified form. Rather than a multi-stage lever, they are now activated with a simple push button. It might seem a little more restrictive, but they’re actually very usable, because the on-device settings customization means you can choose from different lengths of spin back, echo and brake FX instantly. Although the release FX cut all active FX by default, helpfully, you can activate/re-activate effects before letting go of the release FX button and they’ll kick in straight away.

The scene FX work largely in a similar fashion to those found on the RMX-1000, with Build Up FX at the top and Break Down FX below. See Ean Golden’s review of the 1000 to understand how those work. There are a few notable changes:

Aside from the extra modifiers enabled by the push control, the RMX-500 brings Echo+ to the table. This is an extra echo which is applied in tandem with the regular Scene FX. As well as sounding very cool, Echo+ offers a smooth way to turn off the effects, especially those that can be too “in your face” (like the Spiral or noise effects). With Echo+ enabled and set to a beat pattern of your choice using the controls on the far right, switch off the effect and it tails out very cleanly with a nice echo.

The difference in the selection of Scene FX available hints at the intended market for the RMX-500. Whereas the 1000 had very little on board which duplicated functions available on their flagship mixers, the 500 has a few more ‘basic’ effects, like high-pass and low-pass filters, and Zip, which is similar to the good ol’ DJM Flanger. This suggests the 500 is designed more for DJs who might not have access to basic effects in the rest of their setup, and makes the device a better value proposition than the RMX-1000 for a lot of users.

Unlike the RMX-1000, there’s no way to get your own samples into the instrument FX section of the 500. But thankfully, Pioneer have seen fit to include a number of variations of each sound, accessed by holding the Customize Shift button in the centre of the unit and pressing the one you want to change. That also applies to the Scene FX, all of which have at least two variations available.

That button is the only way to customize any of the settings on the RMX-500, and that is both a blessing and a curse compared to the Remixbox software used with the 1000. It’s great that you HAVE the ability to change settings directly, but also could be a hassle if you turn up at a gig to find a 500 installed, and then have to spend time changing all the settings over to your personal preferences; a lot harder than just slotting in your SD card to an RMX-1000.

The ability to reverse the signal flow is a nice addition to the 500. It means you can send your audio, whether coming from outside, or generated internally, across the unit from Rhythm to Scene FX, and vice versa. Something that couldn’t be done with the 1000, it opens up a number of possibilities.

There’s no doubt that having the ability to use the RMX-500 as a VST in your DAW is a nice bonus. Really, though, that’s all it is. Anyone wanting a device for hands-on VST control could almost certainly pick up a clutch of free or budget VST plugins, and a cheap midi controller, for way less than the cost of the RMX. So yes, it’s a cool feature to have included, but I couldn’t suggest anyone buy it just for that purpose.

WORTH THE COST FOR AN ADVANCED EFFECT UNIT

Whether the RMX-500 offers good value as an addition to your DJ setup is wholly subjective:

Which brings me to my overall takeaway impression of the RMX-500; this thing is FUN. Hands-on, hit some buttons, twist some knobs and go wild fun. Whilst there are a few things I would miss from my RMX-1000 if I was to trade down (primarily the isolator), there are a few things which really make for a better experience, like the Echo+ feature and the push modifiers. For half the price of it’s bigger brother, if you can fit it into your setup; physically, and in terms of your workflow, the RMX-500 really is a steal.

If you’re considering purchasing one, support DJ Techtools with your purchase. The RMX-500 is available here in our webstore.