Today’s the day that you can DJ with music streaming from the 20-million-track-plus Spotify library. Algoriddim has partnered with Spotify to give Spotify Premium subscribers access to Spotify’s music—as well as their playlists, starred tracks, and Inbox—from Algoriddim Djay 2 for iPad and iPhone. The launch also includes Match, a track-selection tool based on the Echo Nest’s analysis of Spotify’s library, a new Automix Radio features, and optional new effects for Djay 2 created by Sugar Bytes.

We all suspected it would happen eventually; when and by whom were the big questions. Now, a very good iOS DJing app just became much more intriguing with the addition of Spotify library access to users of Algoriddim Djay 2 for the iPad or iPhone. To unlock the 20-million-plus Spotify tracks from the cloud, you’ll need a Spotify Premium subscription ($10/month in the US).

Music from Spotify works like your locally stored music: it’s analyzed on the fly with BPM, key, beat grids, and colored waveforms, and that info will be stored for when you play the same track again. 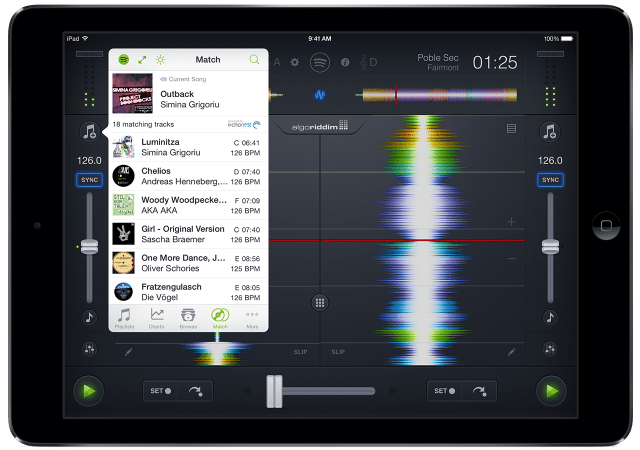 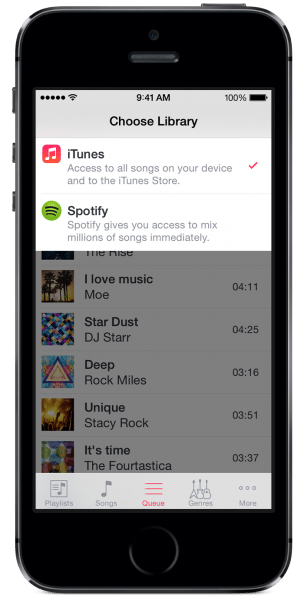 HOW THE SPOTIFY INTEGRATION WORKS

Once you’re signed in, Spotify’s library—as well as all of your playlists, starred tracks, and Inbox—will be available from Djay’s Browse window. You’ll be able to search and select music from Spotify or your local iTunes collection at the same time. You’ll also be able to search Spotify’s charts and search Spotify by common DJ genres. Other Spotify users could even send you real-time song requests to your Spotify Inbox. And oh, how you love requests, don’t you?

Besides instant requests, Spotify integration will open up another level of social sharing within Djay, which has more than 10 million iOS users. Now those users will potentially share the same content library within Spotify, and that could make sharing set lists, histories, and tracks more interesting. You could open a friend’s Spotify set list directly, for example. Djay lets you share set lists as Spotify playlists via SMS, email, Facebook, and Twitter, so your friends or fans could listen to the tracks you’ve played.

The audio quality for music streamed in Djay from Spotify will be the same that you have selected within Spotify for mobile playback. The options are: 96 kbps (normal), 160 kbps (high), and 320 kbps (extreme) Ogg Vorbis.

Karim Morsy, CEO of Algoriddim, told us that the audio quality won’t adjust according to the strength of your WiFi or cellular data connection, but that it was designed to work at least with 96 kbps audio on any connection. Our demo of the Spotify feature appeared seamless when it was tested over a hotel-room WiFi connection. When playing a streaming track from Spotify, the whole track does not load into RAM in order to save processing resources, but there is some amount of track caching into RAM to ensure seamless playback. Morsy said he thinks that Algoriddim is well suited to make the most efficient use of caching music from Spotify’s cloud because of all the work the company has done in that area to make large video files playback smoothly in its Vjay app.

Djay 2 has hardware controller support from companies like Pioneer, Numark, Vestax, Reloop, Griffin, and others, so mixing Spotify music can also be a fully tactile experience.

MATCH, COURTESY OF THE ECHO NEST

To assist DJs in choosing an excellent next track to play from the enormous Spotify library, Djay 2 now comes with Match, a tool powered by the Echo Nest, which Spotify recently acquired. Match uses the Echo Nest’s music analysis to recommend tracks based on BPM, key, musical style, danceability, and how well it would mix with your current track. 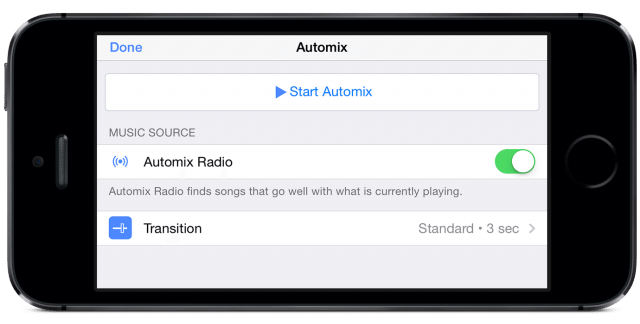 Those recommendations also come into play when you activate Automix Radio, Djay 2’s new automaton DJ mode. For all your set-it-and-forget-it needs, Automix Radio selects the next track, beatmatches it, and performs simple crossfade mixes.

Djay 2 had included some effects, but admittedly, that area was not its strongest suit. Rather than try to create its own effects that competed with the likes of Traktor, Algoriddim partnered with desktop plug-in experts Sugar Bytes to create more than 30 new effects for Djay 2, available through an in-app purchase as several different Packs for $1.99 each, or the whole set for $4.99. The new effects section includes an effect strip control, as well as a wet/dry mix control, and a new effect list selection menu.

GIVE IT A SPIN

Whether or not you’ve already tried the free trial for Djay 2, with the addition of Spotify to Djay 2.5, a new seven-day free trial is available to anyone, and you can also sign up for a free seven-day trial of Spotify Premium to check it out. During that week, if you decide you want to buy Djay, the prices are reduced for the next week following the Spotify launch. Djay 2.5 for iPad will cost $4.99 (normally $9.99), and Djay for iPhone will be free (normally $1.99) for the next week.

If you think this new update of Djay 2.5 merits a full review, please let us know in the comments. 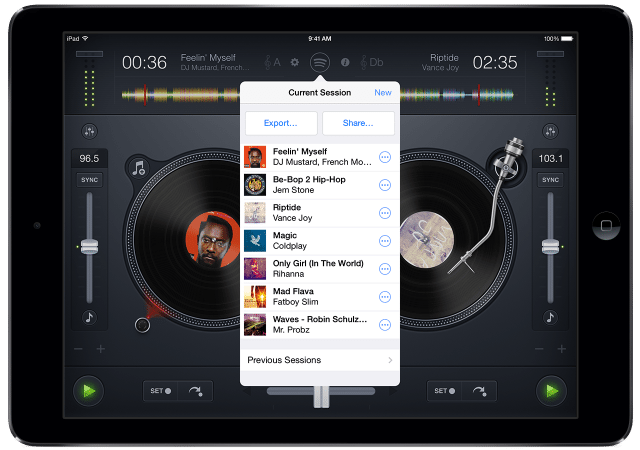