Just a few weeks ago in Barcelona, there were a slew of talented artists performing for the Sónar festival. It was perhaps easy to overlook an event at the parallel Sónar+D conference that packed several legendary DJs and producers in a single room. Native Instruments enlisted Alexandre Cazac of InFiné records, Kerri Chandler, Carl Craig and Luciano to talk about the new Stems format, in a discussion hosted by Tony Nwachukwu, all in front of a packed audience. Guest contributor Steven Maude has captured some of the highlights of the discussion in today’s article.

In case you’ve missed any of the background on Stems, you can catch up with this article. In a nutshell, it’s a new file format wrapped in an .mp4, with four separate audio tracks that can be controlled independently in supported software. Native Insturments is behind the format, and their Traktor software will be the first to support it.

Stems files retains backwards compatibility with MP4 players, including CDJs, that don’t support them: they will playback, but only as a single, conventional audio file. Establishing a new file format as a standard is difficult and NI are on a big push; making this format an open standard shows that they mean business. As well as being supported in Traktor, it is royalty-free to use, their Stems creator tool is a free download and the source code will be made available, although the licensing on this is as yet unclear.

What Does Stems Mean For DJs?

DJ Techtools and the forums have discussed this at length – but what do industry DJ veterans make of Stems?

Both Kerri Chandler and Carl Craig were highly enthusiastic: Chandler describing Stems as “Tascam on steroids”, with the ability to use individual elements perhaps giving a longevity to records.

Carl Craig‘s opinion was that Stems was incredible since it lets you play four files in sync and have the possibility of multitrack live remixing. He cited the advantage of not having to worry about nudging one of those files; Stems, he said, were better than remix sets as they are full tracks and more cohesive.

Luciano pointed out that having the Stems format might give interested listeners a better insight into how the music they’re listening to is formed; he said that he used to isolate, e.g. percussion, when growing up listening. Stems could perform a similar function.

The artists noted that DJ tools have existed for a while – historically, rap, grime, and dance music artists have provided a capella and instrumental versions for DJ and remix use. This can help keep a record around and fresh as producers continue to rework it or use samples in their own tracks, and DJs can use and re-contextualize elements in their sets.

However, these are not always available, and from a DJs point of view would require juggling, say, two decks to control the a capella and instrumental at once. With Stems, a single file and a single deck has everything, reducing some of the overhead involved.

Alexandre Cazac, whose InFiné label is eclectic (listen to a few of their artists below), was enthusiastic about applying Stems to other genres, maybe allowing for DJs to incorporate different sounds outside of the usual.

What Does Stems Mean For Producers + Labels

For producer-DJs, Kerri Chandler was extolling the virtues of being able to create a Stem, playing it out live and tweaking it in a DJ set to gauge the reaction and get crowd feedback. He even went as far as saying you may want to record live and use that as your master.

For labels, there’s now a way to sell the standard version of a track, along with a premium Stem version. Also mentioned was even the possibility of selling alternate versions of Stems; you can imagine that there are different ways that you might opt to bounce a project down to four tracks. Particularly hot tracks might well get away with this, so that DJs have a bit more variety when playing the same track out.

What Does Stems Mean For Listeners?

Outside of the audience who get to enjoy DJs playing out Stems and do things they previously couldn’t, there’s a potential market of Stems selling to dedicated fans.

Special edition albums are nothing new, but if, say, Apple decided to support Stems (and they’re on a real marketing push with their music business right now), it would be possible to sell digital copies with bonus Stems such that fans effectively get instrumental copies. Again, this means that there could be a bigger market for back catalogue reissues in Stems format too. That’s not necessarily going to work for every artist, but may work for those who have ardent fanbases. Going even further, perhaps it’s possible for Stems to sell outside of electronic and rap music genres entirely. 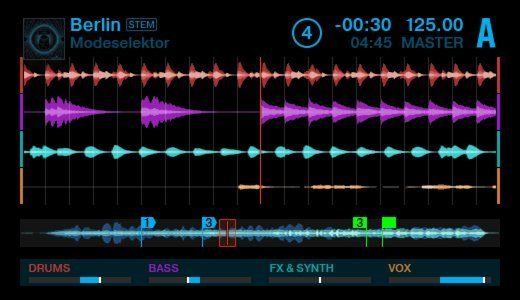 An audience member asked this question. The panel’s consensus response was that four tracks was a good balance between flexibility and complexity.

Luciano mentioned that there’s probably not enough time in on-the-fly DJ mixing to really make the most of anything more than four channels to start using more short time you have to mix between two pieces of music, say 30 seconds. Likewise, Kerri Chandler mentioned that, with four decks and four tracks in each Stem, means you actually have up to 16 tracks to work with.

Carl Craig highlighted that Stems with more tracks might be a convenient format for producers who currently might exchange multiple individual stem files. Instead, they could just send over a single file instead and load that into a DAW. The current specification supports Apple’s lossless ALAC format (which itself is open source under the permissive Apache license). An official or otherwise extension of Stems that supports more tracks for this purpose certainly isn’t out of the question.

Stems themselves are simple to create, with the caveat that there needs to be the source material to create them from. If your project files exist, producing Stems from them shouldn’t be difficult.

This is exemplified by comments Carl Craig made: he said at the event that his label was committed to Stems for future releases. Reissuing his legacy material, he said, might prove difficult. He used to mix straight to a 2 track DAT master and add effects in real time. Recreating those effects would be a problem, and might mean there were slight differences between the Stems version and the original. On the other hand, his label’s forthcoming releases will be available as Stems.

Kerri Chandler was more upbeat, though he said he’s “gotta dig”: half of his stuff is on tape and may be hard to find. This highlights how important archiving and keeping records (both types!) can be for producers and labels.

Carl Craig suggested that Stems would could revitalize a stagnant music industry. He pointed out that just about everyone was guilty of downloading at least one thing for free. Alexandre Cazac had earlier said that the advent of the MP3 meant that many people no longer understood why they should pay for music.

Stems is certainly something for the industry to get excited about: it’s a new product, and one they can charge a premium for, and one that can well apply to classic tracks from back catalogues too, as well as new tracks. But, how much more can they charge for them remains to be seen.

I’m not sure that it will be a panacea to the problem of people not want to pay for music either. At best, the labels can hope that Stems are traded far less than MP3 versions of music, perhaps making them much more difficult to get hold of outside of legitimate stores and forcing people who want them to actually buy them. And, of course, they can’t be ripped from YouTube.

That said, for smaller, lesser known labels whose sales are primarily to DJs, this boost may be enough to help them and their artists to develop and flourish. And NI do have the likes of Beatport enlisted as partners, so there’ll be a place to buy Stems as soon as there’s a publicly-released Traktor version that supports it.

Watch Ean’s overview of Stem Decks in the below video and read more here:

Is this a teaser of new Traktor hardware? Nope.