We saw an early version of Bomebox in January of 2015 at NAMM. This is Bome Software’s first hardware product, designed act as the central hub for connecting all types of audio gear without an additional computer. Keep reading to find out more about this recently released device.

When the BomeBox was first teased at NAMM 2015, Bome was still waiting on the device to pass various certification tests. It took much longer than expected – requiring changes to the unit itself to be able to be sold in the US and abroad. But at last in August, Bome’s founder Florian Bömers was excitedly able to announce that the BomeBox was available and shipping.

So what does this small box even do, and why should DJs, producers, and performers care? In short, the BomeBox is able to connect almost any type of gear together without a separate computer, and pass control messages back and forth. As an example, you’re able to connect a classic Roland synthesizer (MIDI) to a Midi Fighter 3D (USB) – with only the Bome Box between the two. Connecting USB-MIDI to 5-pin DIN MIDI devices is a breeze, with all ports forwarding by default.

But this is Bomes – so the functionality goes far beyond simple port forwarding. The BomeBox has the ability to run scripts on the MIDI data that it is receiving from every device in real-time. This all works in parallel with Bome’s MIDI Translator Pro software – which allows you to route and interpret MIDI messages in unique ways between software programs and hardware devices.

You need a computer to create the mappings to connect devices together in clever ways, but once those mappings are loaded onto the BomeBox, it’s a fully standalone operation.

Why Do We Need BomeBox?

When MIDI first was introduced to the public at the 1983 winter NAMM show, it was an extraordinary feat. Two collaborators, Dave Smith (then-president of Sequential Circuits) and Ikutaro Kakehashi (founder of Roland) designed and developed the MIDI interface together, allowing audio gear from different manufacturers to talk to each other.

The first gear to be connected? A Prophet 600 and a Roland JP-6 synthesizer:

Since 1983, the biggest change in the musical instrument industry has been the personal computer, and the development of devices that don’t connect to others via MIDI cable. There’s USB MIDI controllers, Ethernet control surfaces, tablet-based Wi-Fi devices, and much more – but they’re each designed with a specific use case in mind. The BomeBox bridges the gap, much as MIDI did in the early eighties, allowing all kinds of devices to talk to each other.

The BomeBox might act as the central hub in future live performance/production setups, but the design is clearly focused on staying minimal and utilitarian. The most important part about the unit itself is naturally the inputs and outputs, which include: 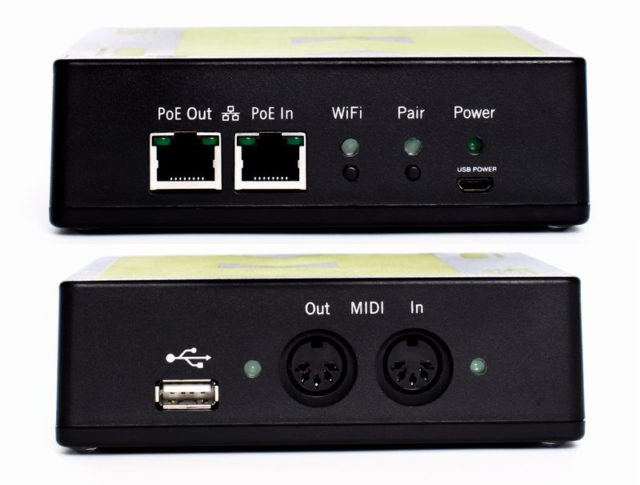 A helpful feature for portable rigs is that the BomeBox has versatile power solutions. As noted above – it can be powered over Ethernet, but also can use standard external battery packs – like the ones you might use to charge your cell phone when you’re away from an outlet:

The BomeBox also can send up to 1 amp of power on the USB Type A port, or be used alongside a powered USB hub if you have multiple devices (larger MIDI/USB controllers, etc) that need power via USB.

We’re excited to get a BomeBox here at DJTT and review it in the coming months. What would you connected together with one of these devices? Share in the comments below.

MIDI Turns 30, Gets A Grammy