A new photo of the still-not-announced DJS-1000 (aka TORAIZ in a CDJ) sequencer has appeared online. In this article, we break down the features that we can clearly see from the new photo – including audio inputs/outputs, touch controls, effect units, and more.

In case you missed it, first read our original article on the sneaky reveal of this new DJS-1000 from Pioneer DJ.

Taking an unannounced piece of DJ gear to a musical festival is a very careful move on the part of a hardware manufacturer. It’s a road test, they can collect feedback from DJs, and they get a lot of free publicity. Festivals are heavily photographed, and publications are eager to get their amazing photos online. It wasn’t too surprising to see this photo emerge from Walker & Royce’s set earlier today:

It’s not enough to just look at – let’s “enhance” and speculate about the controls and their functions below:

The first thing that jumped out to me about this photo were the audio connections. Besides the obvious USB port on the top for loading samples and songs, there also are a number of really interesting ways to get audio into the new DJS-1000: 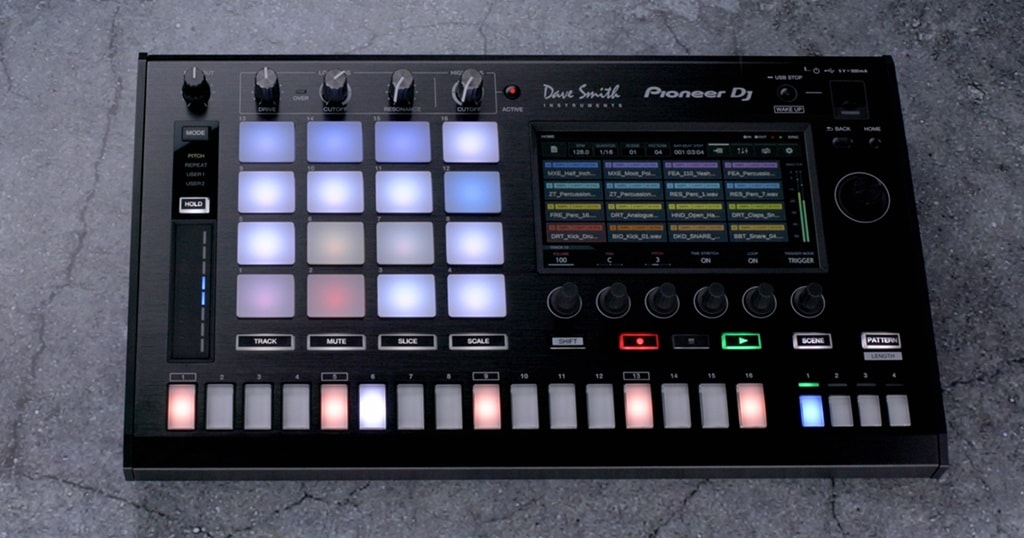 This is the first photograph where we’ve really seen the complete top of the DJS-1000 unit very clearly, allowing us to see a whole assortment of controls. The on-screen interface still is a mystery, but we have a pretty good idea for the rest of the units’ physical interface. Our best guess is that almost all of these controls are very similar to the TORAIZ SP-16’s – pictured above for comparison.

Just as with the SP-16, there’s 16 step buttons along the bottom of the DJS-1000, and to the right of it seem to be four smaller rectangular buttons. These are likely for changing the pattern length – wth two buttons above it for Scene and Pattern as well.

The top-right of the DJS-1000 looks identical to a NXS2 CDJ. You can clearly see:

The touchstrip on the far left of the new sampler/sequencer looks like the same style as on the TORAIZ SP-16 – which allows you to quickly roll or pitch modulate any pad of your choosing.

Right above the touch strip is a classic Pioneer DJ FX workflow – a blue button with a single knob next to it. This could adjust the levels of the touch strip effects (below). An alternate theory – the controls looks exactly like the Level and On/Off layout on the DJM-900 NXS2 in the SEND/RETURN section:

Is rekordbox 6 on the way? First signs of a “new service system” from…