If there’s a gold standard of turntable DJ gear, it’s the Technics SL-1200 models. Panasonic has ended and relaunched the product brand many times since the first model was introduced back in 1972 – including a recent 2016 relaunch that was criticized due to the associated $4,000 price tag. Recent models of Technics simply haven’t been DJ-focused, but 2019 could be the beginning of a major shift back in that direction.

This year at CES 2019, Technics has send out a save-the-date notice about an event called “Technics7th”.  It’s set to be a live streamed event on Boiler Room and Dommune with heavy-hitting turntable-loving artists Kenny Dope, Derrick May, Cut Chemist, and DJ Koco on the lineup: 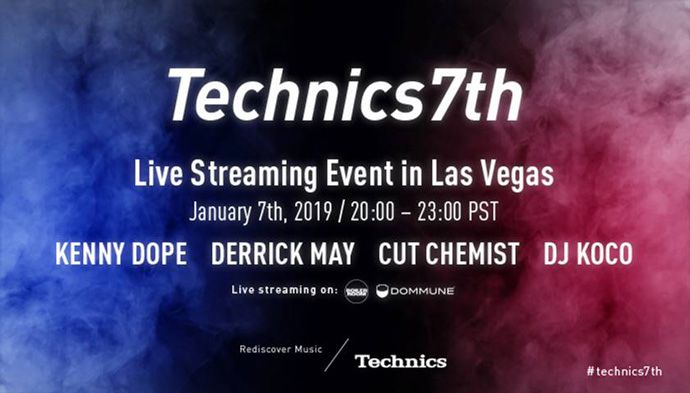 The heavy branding focusing on the 7th seems to hint it is very likely Panasonic will announce a new Technics SL-1200 MK7 model – the natural follow-on from the last generation of DJ-focused Technics, which were the MK6 (released in 2008).

Technics SL-1200 Series turntables, launched in 1972 and shipped a cumulative total of 3,500,000 units worldwide., serve as the de facto standard even today in many clubs all over the world. The event will focus on the SL-1200 Series with performances by globally renowned DJs who are also fans of the legendary series.

The real question becomes pricing and features. With so many OEM Hanpin turntables and other new generation turntables entering the fray, a new SL-1200 will need to be both price and feature set competitive in order to enjoy success.

The event will be livestreamed  from the Bellagio Hotel in Las Vegas starting at 8pm PST on Monday, January 7th here on Boiler Room or here on Dommune.