We are proud to announce the anticipated mini.Translator program and its first patch which allows the VCI-300 to work with programs other than Serato Itch. Even after converting to midi we were able to keep the jog wheels and pitch faders high resolution so they will still be very precise. The best part though is that its free for you to try.

Enter your email bellow and you will receive links to mac and windows versions as well as updates on when the newest patches are available. This is the first beta release and there may be minor bugs, so please report them or post questions here. We are working on a full preset for the VCI-300 and Traktor that includes effects mapping and a matching TKS file.

After installing the mini.Translator you will need to install the preset. This can be done by dragging the preset into the program. 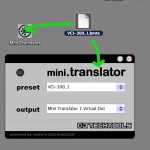 The pre-set should automatically recognize if your VCI-300 is connected. If you move a control and the blue light illuminates then mini.T is receiving midi from your controller. If nothing lights up then you may need to re-define which midi controller the pre-set should look for. This can be done by right clicking anywhere on the interface and selecting “midi settings”. Make sure the “MIDI IN port” input is set to what the computer has named your VCI-300. This should only need to be done once. 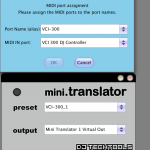 Next your Dj Software should recognize that there is a midi controller called “mini translator virtual output 1” available. This is what you should select as your midi input, NOT the vci-300. The midi ouput however should be set to the vci-300 as shown in the photo bellow. 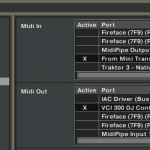 Even though its small and simple to use, mini.Translator packs a big punch. You are essentially getting the entire midi processing engine of Midi Translator Pro, the markets most robust midi engine created by Bomes Software.  Those that use Bomes know its a very powerful program but not so easy for the average dj to figure out. So Dj TT and Bomes have teamed up to create mini.T which runs all the same conversions behind the scenes. Just load the preset of your choice, plug in a midi controller and start playing like a pro because we have done all the programing for you.