Serato Itch has a lot going for it but everyone always mentions the same thing. “man, I wish it had some effects”. Well your wishes look like they may be coming true very soon. There is leaked information floating around the web that exposes what appears to be a Vestax FX controller designed for Itch. To be honest, I cant confirm or deny the validity of the information at this time. (confirmed) Based on the quality of the image and the very official looking PDF that was also leaked, its safe to say that this is a product you will be seeing in the market soon. 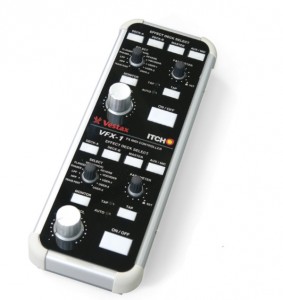 A simple and well laid out accessory controller to the VCI-300, the Vestax VFX-1 appears to be designed for 2 independent FX units. I like the large Wet Dry knob and the prominent on/off button. As long as the FX are good this one promises to be a handy controller for performance FX. Traktor users could also easily use this controller in their setups and gain some much needed fx control. 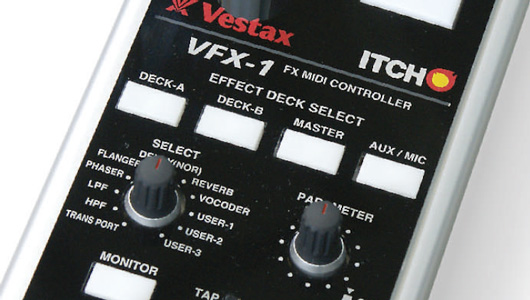 We don’t know too much about what may change in Itch but the controller suggests:

Now if Itch would just support some basic midi mapping they might have a good chance at competing with Traktor Scratch Duo. 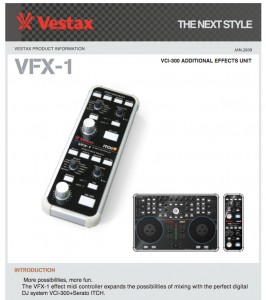 The PDF above, was leaked from a pro audio store in the Czech republic and posted on our forum. Its common for the manufactures to send out product information before making an announcement so that the stores are ready to sell equipment shortly after the official press release. Unfortunately, its often the case that small online stores frequently put up info before they are supposed to and product gets leaked. That appears to be the case here, so its possible the Vestax VFX-1 and a new FX enabled Itch may be coming to market sooner rather than later.

The Vestax Response from the comments below

What’s up Ean, and Techtools…quick on the gun as usual.Hope everyone is well and thank you for all your comments.My name is Charles Akira Ono at the Vestax Corporation.and confirming that the VFX-1 is real.
Is it the final version you see up top?No, and it will only get better. Stay tuned.
Regards

If you have questions or concerns email us at Customer Service.
csg@vestax.jp

The Serato Response From the Serato forum

We at Serato have long desired to be able to provide effects to those that want them – whilst avoiding forcing them on those that don’t. We certainly have plans for effects in our DJ products. We don’t have any official announcements just yet. What I can say now is while yes, we are working on a controller with Vestax, the image in this thread will not become a final product.

Vestax has released a final image of what the VFX-1 will look like and indicated a September release for the controller. 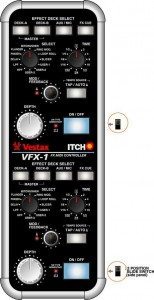