Controllerism continues to take small leaps forward as the software and techniques improve but the giant steps are going to happen in the realm of performance interfaces. Without a solid controller surface that has been designed to play like an instrument we wont be able to leave the realm of noodling and enter the fabled land of flow.

The Otto interface brings us one large step closer in that direction. This remarkable research product is the brain child of Luca De Rosso at the IUAV (University of Venice). Luca created a single prototype interface and matching loop slicer software for his thesis project while he studied interactive design.

The Otto is not a midi controller, but instead a real time musical interface for beat slicing, beat-jumps and reverses. All of these functions can easily be accomplished through a midi controller and Traktor but the Otto proposes a very interesting ergonomic layout that allows tangible and visual access to the loop your working on. Using the LEDS as a cost effective way to visualize the waveform and a circular layout, the Otto gets a lot of performance possibilities packed into a small space.

The top surface displays the loop on a circle of large buttons which can access 8 “cue points” in the loop. Along the side of the interface is a set of buttons which trigger beat repeats. The silver toggle switch on the top engages a reverse function and the sliders fade in the background beat or the sampled loop.

Check out the guts- quite the soldering job!

Luca built the software using cycling 74’s max msp. Its a relatively basic piece of software that performs glitches and beat jumps similar to many other tools on the net. The exceptional breakthrough is the tangible interaction the controller provides, giving anyone a visual and physical feel of each sample.

Since this was a thesis project there is little chance for a commercial release in the near future.

Luca indicated in this interview:

“Many people in this hours are asking me if and when they can buy one. I which I could sell the tomorrow but is not that easy to make one of them in few days. So I’m now looking for a company or someone who wants to help me and see if we can let other people use it. Another point is that I would like to keep it quite cheap. OTTO should be something that one can buy two or three and combine them together to work with melody and rhythm together.

he went on to explain the reason for its creation

..for my thesis project I did a deep research into the electronic music field.. I was more pissed that to make a good beat slicing you have to use software and programming interfaces with mouse and keyboard. But when you hear it you feel like you want to actually play it! … Beats slicing is a technique developed in software music but it sounds like something manipulated by a human or something anagogic. You probably remember the Aphex Twinn video Monkey Drummer. Ok that is not beat slicing but the cyborg creature which is playing the drum set gives the idea of what you are hearing. So the aim for my project was to create an hardware for a technique which is really evolved but for which there is nothing specifically designed! 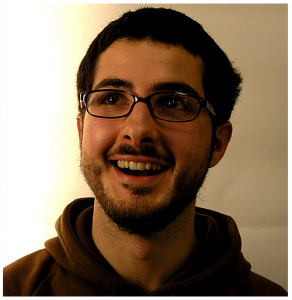