The DaScratch controller from Stanton is a one of a kind and truly innovative controller. We have seen a lot of new devices aimed at the digital dj recently but not many manufacturers have been willing to think outside of the box and innovate on a software and hardware level. Developing such a device seems to have paid off for Stanton, as after several months of playing around with the controller I am happy to report its a pleasure to use and surprisingly fun! 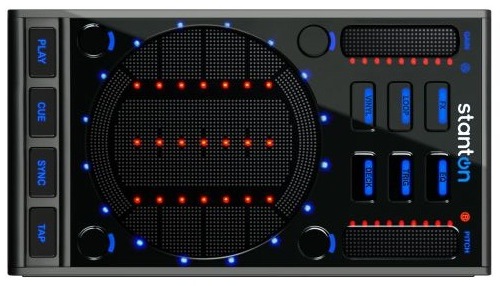 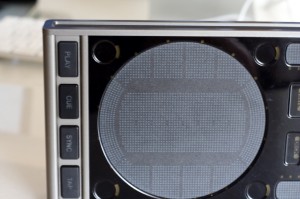 The large center circle contains 3 modes:
While we have seen many touch sensitive X-Y Pads in the past like the Koas Pad and Novation SL-25, Stanton has taken a different approach. Instead of the standard  X-Y configuration, Stanton uses their own technology called “Stantouch” in order to create a more modular surface. One example is the button mode where the circle area can be used as 8 buttons that can even be pressed at the same time. While its not true multi touch technology it does go a step beyond what an X-Y could ever offer.
A textured plastic film covers the touch zone and manages to remain smooth but not too slipery, even after extensive sessions of mixing with sweaty hands.  The only long-term improvement’s I could see is that perhaps the surface could have a bit of a click to it as you press it down, much like modern day mobile phones. Instead of requiring a push, any light touch will result in a button “push”. While very sensitive, I did get used to the feel over time and didnt run into may accidental triggers.
One of the problems with touch-faders is their accuracy and effective resolution due the finger width. The two touch-faders positioned at the top of the unit are only 5cm long while the touch-faders found on the bottom are a bit larger, being 8.5cm long each. This is a bit of a problem for pitch fader control because you need a nice long surface for fine tweaking. To combat this, the faders can be put into relative mode where you repetitively drag your finger in either direction to make smaller tweaks. I still personally dont find this a suitable replacement for a real pitch fader. The EKS otus also attempted that solution but it also failed to gain support.  If your using SYNC religiously then its not much of a problem to use the touch faders for small adjustments but making big moves to tempo via touch faders can be a chore. The pitch strip conveniently doubles as a pitch bend controller so if you press the top or the bottom of the fader. 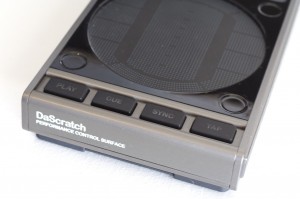 The 4 buttons on the bottom of the unit are nice and big for easy triggering. While not arcade buttons, they are a bit better than what you can find on most of the midi controllers. We should report that one of our forum moderators and writers, Moniker, has had a problem in the past with the buttons. She reports that a mixture of smoke machine residue and other fine debris that builds up over time is quite capable of making these buttons stick.

Fortunately this problem is user repairable thanks to the design of the hardware. By unscrewing the back panel and taking the buttons you can easily clean them with some rubbing alcohol. In fact the two main areas of the controller that can wear and break over time are the buttons and the USB connection. Both are totally user replaceable if you to order the replacement parts from Stanton which means cheap quick easy fixes if your unit is no longer under warranty.

The other buttons on the unit are round, recessed touch sensitive buttons. These buttons have great LED feedback in 4 different states – Off, Red, Blue Purple. Multicolored display is great for indicating whats going on in your software or what preset your in.

The center touch surface can also be used as 9 buttons, 4 on each side and one giant one in the middle. The 8 side buttons are too small for serious mashing but on most presets these buttons have actually been combined into 4 larger buttons which are more usable for cue juggling routines.

Looking at the underside on the unit reveals a very ingenious and forward thinking cable management and storage solution.  There is no visible usb connection but taking off the rear panel will reveal enough space to comfortably fit a decent length of usb cable and the usb connection for the unit. Around the edges of the plastic plate there are small arches which allow you to position the USB cable in any orientation that fits your setup.

The DaScratch name may imply a relationship with the software that has dominated the “scratch” field for several years. While both Serato Itch and Serato Scratch both have midi assignable functions, they do not support midi scratching. So while you can use the DaScratch to control video functions, effects, cues and loops- dont expect to scratch with the center wheel.
Scratching does work with other dj programs however. While I had trouble juggling songs, it was not too hard to whip up some pseudo scratching. Stanton implemented an interesting technique to overcome the fundamental problem of scratching with lo-resolution midi by creating 2 scratch zones. The inner, runway zone is a super sensitive scratch area and the outside. circular is a faster but less accurate zone for larger scroll movements. 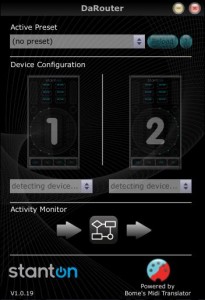 The included router/middle ware software is where things really start to get interesting with this device. Every controller works with a cross platform software called DaRouter which manages all of the midi data sent between the controller and your dj software.
By utilizing middle-ware Stanton allows its SCS3d users to open translation files that open up many more possibilities than just standard midi communication.  Stanton makes several presets available as free downloads for different dj applications including:
If your software of choice is not present,  Stanton also provides a generic preset which you can use with any software. You can download or create your own user presets and take the concept to the next level. It should also be noted that Mixxx,  the open source DJ project, directly interfaces with the controller without Bomes midi translator, so if you plan to use this program you wont need to use DaRouter.

As you can see in the picture above, DaRouter is powered by Bomes Midi Translator. If you choose to buy Bomes Midi Translator Pro it will allow you to edit Stanton’s presets or alternatively create their own presets.
Bomes Midi Translator is a program that allows you to re-program midi messages coming to and from midi controllers and applications. It provides the muscles behind the the router and performs complex functions like Traktor’s modifiers behind the scenes. While the router just “plays” pre-sets, those same presets can be re-configured inside Bomes much like you edit midi-mapping files in Traktor. Stanton provides both encrypted translation files for use with DaRouter and unencrypted Translator files for use with Bomes Midi Translator Pro.
The combination of programmable midi messages, individual control over nearly all of the LED’s and an array of touch sensitive faders makes for a powerful combination. The messages sent by the unit are very simple and many of the features including the elaborate LED lighting found in the official Stanton control is handled by the code inside of the Bomes Midi Translator engine. Since most of the complicated programming happens inside the presets, It feels like you have complete control of the controller on a firmware level. Stanton really deserves some credit for taking this approach as I dont don’t think we would have liked this unit nearly as much if it was not so customizable.

The Traktor Pro is the most solid layout available for the device and gives access to nearly every function that you need to mix from one SCS3d unit:
Instead of shipping their unit to Native Instruments and expecting them to make a mapping for the unit like all too many other manufactures, Stanton has actually put a huge amount of time in developing the mapping themselves. While there are some things that users may wish to change to personalize the unit you wont find yourself starting from scratch like you would with all to many other controllers out there. 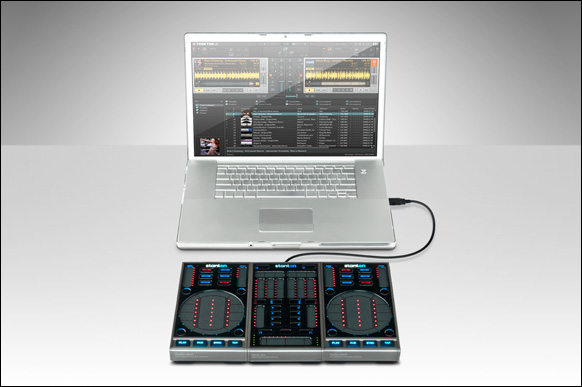 While DaScratch might not be the best name for a midi controller we have been quite pleased with the performance and direction of the line. The DaScratch can be a great accessory to existing gear or alternatively a portable solution for those not looking to carry around a lot of heavy equipment. Those savvy with midi translations can take the unit much further than many controllers on the market, and those without that skill set can enjoy ready to go mappings.
Using DaScratch as a third of 4th deck in addition to your standard controller feels like a totally reasonable sell. For first time dj’s on a small budget you could buy a single unit and be able to mix multiple decks without much investment. To those intermediate djs who have already have a controller around this device makes a wonderful addition to your gear that can be highly customizable.
At $200 the Dascratch sits in a tough price territory. Its not an easy impulse buy like the Korg nano pad but its much more accessible than the higher priced controllers we frequently talk about. Then again, to get full hands on control of 2 decks and a mixer you need to buy 2 SCS 3D units and the new complimentary mixer (the SCS 3M) which will run you around $600 in total.  For excellent configuration, easy transport and original control interface that’s a very attractive package to someone that loves Bomes and is ready to spend days programming. For those djs that want out of the box tactile mixing- the VCI-100 still holds its title as best value in the $500 price range.
controllerda scratchdascratchReviewSCS 3dstanton
Share
You might also like More from author
DJ Controllers