After engineering several solid sound cards, Native Instruments has rounded out their lineup with the entry level Audio 2 dj. Its a portable card aimed at the controller crowd with 2 discreet stereo outputs. You can use one 1/4″ output for the headphones and one for the speakers or run both stereo outputs into an external mixer.  With volume control for both channels, USB power, and very portable size (about the size of a deck of cards) this interface will make an excellent choice for those wanting a inexpensive sound card with good audio converters.  Dj TechTools got an exclusive look at the audio 2 in Berlin and has the inside scoop on this new product. 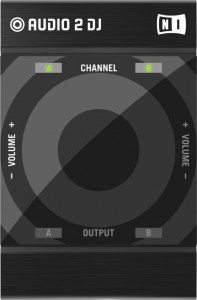 There are no bells and whistles here but everything you need for basic djing is accounted for:

These renders make the unit look like is might be metallic but the surface is in fact plastic. Its well built plastic and certainly more professional looking than the competing Numark DJ I/O but not as robust as the AudioFire2 from Echo. That being said, if weight is concern- there is no other USB cards out there that are lighter and smaller than this. The Indigio Dj series (which are card slot based) are more portable but require those increasingly scarce card slots that Apple seems to not like so much. The top of the unit is a glossy acrylic surface, the same look and feel found on the  vci-300 and  Audio 4.

I am happy to report the headphone outputs are nice and loud, and the outputs are solid. NI tells us that they are:

We didn’t get the chance to really put the drivers to the test but since the audio2 utilizes the same chip sets as the audio4 (which I have tested extensively) then its safe to say that the drivers will have the same reliability. When compared to controllers with built in sound cards, the audio 2 dj is still going to be a step up in quality. A solid sound card in the $100 price range makes it much easier to pick a controller without a built in audio interface as the value of the package will be much better. Here is one example:

Using the same A to D converters as its bigger brothers, the audio 4 and audio 8,  this version sacrifices the number of inputs/outputs but not sound quality. Its very similar in form and function to the first dj oriented sound card on the market, the Indigio dj. That sound card was a great choice for many djs but with laptops frequently missing card slots, USB is a much safer  bet these days.

NI has been cranking out some very nice promo videos featuring skateboarders, turntablists and old school djs. The latest one demonstrates  the audio 2’s portability  as a parkour runner jumps across Berlin London rooftops to deliver his sound card to a dj spinning at a rooftop party. Check out the last 20 seconds where our very own VCi-100 arcade edition makes a nice cameo appearance. 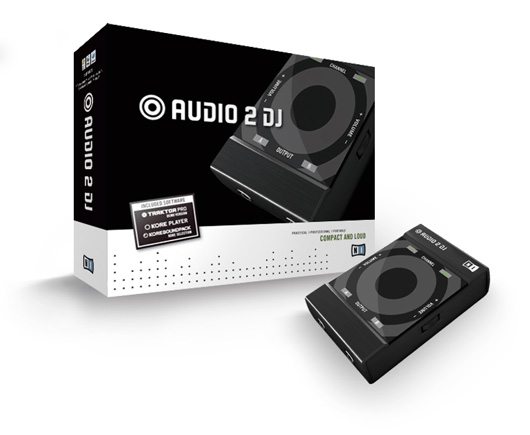 A State Of Traktor: New Hardware and Software Coming in 2018