My Quest for Good DJ Headphones…

In the digital age of DJing, the gear we use evolves and changes at an ever accelerating pace. Mixers are now also sound-cards and midi controllers. CDJs are being replaces by buttons, sliders, and VCI platters. Record bags and CD wallets have given way to Laptops in the DJ booth, and unless you use Scratch Live, turntables no longer serve much purpose. There is one bit of kit however, that has remained relatively unchanged during a turbulent decade of evolution in the DJ booth, headphones.

For quite some time, I’ve been searching for the perfect pair of headphones. My criteria are simple:

While this sounds like a simple enough request to fulfill, I’ve spend the better part of a decade wanting more from the set of cans draped around my neck. Most djs have sensitive ears that demand good sound reproduction, which surprisingly few manufacturers are interested in. Equal weight is also give to durability, because who cares how good your set of cans sounds if they fall apart 2 months after you buy them. You don’t even have be a touring dj to be concerned with durability either because, lets face it, Djs aren’t very nice to our headphones. 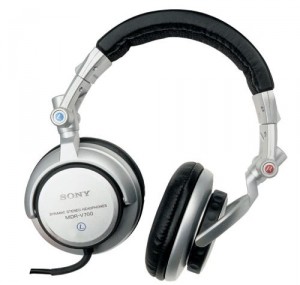 My first [and second] set of headphones were the Sony MDR-v700. About 7 or 8 years ago there weren’t many offerings for headphones built for the “DJ” and back then it seemed like every DJ had a pair of these things. They produced decent sound were generally sturdy enough to last you a good while. The cup swivel joints on the Sonys are notorious for cracking and will eventually break if you beat them up. The “leather” iso pads that cover your ears aren’t really the greatest at isolation and eventually dry out, crack, and become uncomfortable to wear. Eventually the plug wire connection may go as well.

After several pairs of un-reliable sony’s I decided to play the field a little. Durability was my number one concern and I picked up a pair of Technics RP-DH1200 headphones which were, at the time, the sturdiest and most well built pair of DJ headphones available. I brought them home, plugged them in, then immediately returned them. They colored the sound horribly; bass response was artificially heavy and the mid-ranges were barely even present. After that experience, equal weight was given to durability and sound. 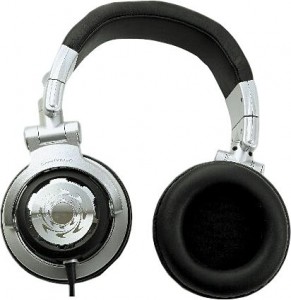 Eventually I found the Denon DN-HP1000 headphones and assumed my troubles were over. By DJ standards they produced accurate, full sound that felt natural. Isolation was good and they appeared durable but they still had their fair share of problems.  The cord connection was loose right from the beginning, but was easily fixed by taping it in place with electrical tape. After 9 months, the adjustment slider broke on one side right where it connects to the can so I duct taped it back together and plugged ahead. A few months later I threw in the towel when the other side broke in the same spot 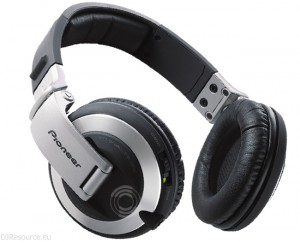 With no other option, the Sony MRD-700s came out of retirement while I started researching the latest market offerings. A few youtube videos of the relatively new Pioneer HDJ-2000s looked very appealing but I was wary. Despite my respect for all the DJ equipment Pioneer makes, the HDJ-1000 model was never an option because the complaints against them were similar to that of the Sony MDR-v700s. The 2000s however, intrigued me with their all metal [magnesium] build and were worthy of a closer look.

The first thing I noticed was the price tag, which is close to double that of other DJ headphones on the market. You get an all metal casing, memory foam & leather ear cups, a detachable lead cord, and superior sound quality. I got my local Sam Ash to do a price match for me and decided to give them a go. 3 months later, I’m happy to report they are the best set of cans I’ve ever owned. The are way more durable than anything else out there. The memory foam pads are super comfortable, and the sound quality is dead on. The reproduce sound with an accuracy that give studio monitoring headphones a run for their money. The jury is still out on their longevity, but with a replaceable cord, I’m confident I’ll be using these for a long time.

One tip I can give to anyone looking for a new set of headphones it grab a CD or bring you iPod to your local music store and demo as many as you can before committing to purchase, and when the clerk isn’t looking check how durable they are. Preferably with out actually breaking them.

I have used the same type of headphones for 12 years, Sony MDR-7506. While they are technically a studio headphone- many djs around the world use them for their reliability and clean sound. We would highly recommend you go with these over sony’s dj focused cans, the  MDR-v700 series, which are sure to break in a few months. Please share your favorite cans in the comment section and we will perform a comprehensive head to head comparison of the top models.