Today Novation announced a new Ableton Live controller called Launchpad, and DJ Tech Tools got  an advance look at one of the first units available. What one might consider a poor man’s APC-40, the Launchpad ($199US) anchors itself around and 8-by-8 grid of 64 buttons for launching clips and scenes from Ableton Live’s Session view, while a Mixer mode gives you ready access to track volume, pan, Send A/B amount, mute, solo and record enable. Read on to decide if you should blast off or abort mission. 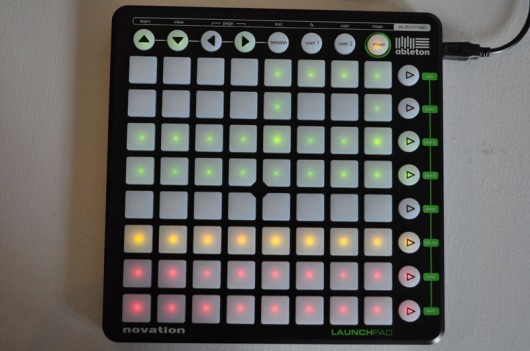 After installing the software and setting Launchpad as your control surface in Live, Launchpad’s pad grid in Session mode will show you the top eight clip slots of the first eight tracks in your Live Session view. If you have more tracks and clip slots in your session, use Launchpad’s directional arrow buttons to move through the software’s session view. A red rectangle in Live moves about as you scroll, showing which clips are active on the Launchpad’s grid.

The circular Play buttons on the far right of the Launchpad launch scenes in Live, and the grid buttons launch or stop individual clips. Launchpad’s buttons are backlit with green LEDs for clips that are active, yellow (amber) LEDs for clips that are available but not playing, and unlit buttons represent empty clip slots. Just like you would do with a mouse in Live, you can use the empty clip slot to stop an active clip in the same track. 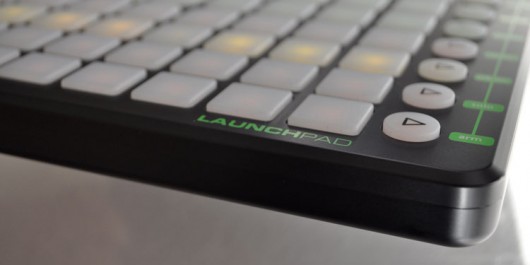 To compensate for its lack of “mixer” controls like faders and knobs, Launchpad features a mixer mode. Press it once, and the pad grid shows you four rows of green “reset” buttons representing the status indicators of the volume, pan and Send A/B effect levels for each track. The bottom four rows of buttons enable the stop, mute, solo and record enable functions for each track.

While still in mixer mode, the right-hand Play buttons take on different functions. The top four Play buttons in Mixer mode enter display mode for volume, pan, and send A/B levels. In those modes, the pad grid shows the volume levels, pan position and send amounts for each track and they can be adjusted with the buttons.

If you want to use Launchpad as a MIDI controller on other software, you can, but you must do it using Novation’s free Automap software. Most, but not all, MIDI software works fine with Automap, but it doesn’t play well with M-Audio’s Torq DJ software. That’s a bummer too, because Launchpad has two user customizable midi pages. Since Torq can ReWire to Ableton Live, Launchpad would have been a great controller to use in a Torq/Live set-up with some of Launchpad’s user pages mapped to extra Torq functions.

64 multi-colored buttons with fully integrated Ableton Live support for $199 including software. That’s a pretty compelling sell for a lot of folks who want easy access to Live without breaking the bank. Could the buttons feel better? Yes. Could the package be a little more sexy, like the Monome? Yes. Can you beat the per-button value for Ableton heads? Nope!  Check back later in the month for a more comprehensive review after we put the controller through more rigorous tests and see how well it works with Traktor and other DJ software.

Inside the Livid Instruments Block Controller