How To Be a Successful DJ Part 3: Production

Part One of this series covered setting goals and deciding on the direction of your DJing career, and the second installment helped you secure your first gigs. But now that you’ve got some skills and some steady gigs, how do move to the next level of booking high-profile, globe-trotting dates? Any DJ’s path to the top will be multi-faceted, but it’s pretty much accepted these days that you will not get there without producing your own respected tracks and remixes. Many DJs will already have a music background or a desire to produce music, so it’s not simply a career move to do so. However, for some insight on the correlation between production and a DJ career, we talked a man who might not have a DJ career without production: San Francisco’s tech-funk producer/label owner/DJ Claude VonStroke, who had some great advice to share.

While it’s beyond the scope of this one article to show you how to make good electronic music, over the coming weeks, DJ TechTools will begin offering technical articles on music production for DJs. Please use the comments section if you have specific wishes for what you’d like to learn or understand better about music production. 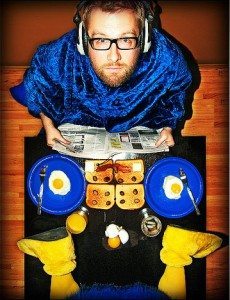 Claude VonStroke is the DJ/production pseudonym for Barclay Crenshaw, who grew up around the rich musical breeding ground of Detroit and bounced around New York and Los Angeles before settling in San Francisco. After producing a 6-hour DVD package on the international electronic music scene called Intellect, the Claude VonStroke persona was born one night at a party as friends were discussing fake European DJ names. Before long he was spinning and producing as VonStroke, and in 2005 he started the tech-funk label Dirtybird, followed by the deep techno lable Mothership in 2007. VonStroke has amassed a lengthy credit list of productions and remixes in less than five years, including his second full-length album, Bird Brain, released just last month.

What interested you first, DJing or producing your own music?
I always DJ’ed since I was a kid (maybe not house blending-style DJing). But producing is what I am best at, and it’s always better for me when that is going well.

Would you be where you are today in your DJ career without having produced so many of your own tracks and remixes?
No way. It’s not like I’m Derrick Carter on the decks. I had to make my way through the production route for sure. I kind of learned to DJ professionally on the road, believe it or not. When you have big tracks, sometimes people assume you are an awesome DJ, but it’s not true all the time. Some of my early gigs were so shitty they make me cringe when I think about the mixing. I’ve really progressed as a DJ over the last few years. Now I feel much more comfortable and fearless on the decks than before. DJing is my “most improved” skill.

Was there a particular track or remix you made that got you a lot of DJ gigs on the strength of that track?
I’d really like to think it was the “Warpaint remix” (my favorite) but i have a feeling it was actually the more commercial “Heater” [2007] and “Put Your Hands Up for Detroit” [2006] remixes that got me the bigger paid gigs. [VonStroke discography]

How did you first get into production, and what’s a good first step for other DJs to get into production?
I got into production when I was 11, and I’ve always been obsessed with gear and computers — so I don’t have any real advice for someone who wants to learn everything in like one year. All I can say is that if you want to be great, it is going to take some time. Start by copying your favorite tracks. Seriously… try to copy them exactly — even for sound quality. You will learn a ton by dong this. It is the fastest way to ramp up your skill level (or get really frustrated).

Do you have advice on how to get remix assignments?
Yeah, make hit tracks! Or… tracks that sound really different to the point where someone will be like, “I want this kind of sound,” and then you are the only option available. You will need to have some releases out on real labels for anyone to notice you, for sure.

Once someone makes their own tracks, what do you think is a good first step for getting the music some attention?
Sell them to your favorite label. Make tracks specifically for a label and send them in saying “I made this for your label.”  The worst possible thing you can do is send out an email to 30 labels saying this is your new demo. Then no one feels special, and they’ll just bin it straight away.

Is starting a label a good approach, or should DJs be established first before doing so?
Starting a label is a great way to go, but… you need to save about 20 grand before you even consider doing it. You need great art, great music, good mastering, etc. It takes some money to get started, believe me. You should be able to go through four releases before you get paid 1 cent. That is a good plan for starting a label.

What’s in your recording and mobile production studio?
I’m usually deep into Reason and Ableton Live. I rarely dabble in Cubase and Logic, but I have them. I used to love Sony Vegas and Cakewalk Sonar on PC, but now I’m on Mac. I have a lot of outboard gear, but it’s not necessary gear. It’s writer’s block gear — meaning I twiddle some knobs to break through when I’m stuck, but I don’t rely on the outboard stuff. I have a Moog, a [Korg] Radius, some analog valve gear, lots of pedals, a patch-bay, etc.  I never produce tracks on the road, so my laptop isn’t really set up for making music.

Claude VonStroke hosts his Bird Brain album release party tonight (Nov. 13) at Mezzanine in San Francisco. Check out his music and other upcoming show dates on his Myspace page.

Tiefschwarz Interview: The Death of Vinyl and Big Labels