Designing and building your own hardware was previously restricted to those with huge R&D budgets or extensive technical know-how, but it’s now within the reach of just about everyone. Development of the Arduino and other low-cost, USB powered MIDI boards have sparked many home brewed MIDI controller projects that are relatively easy to use and fairly powerful.  This article will cover some of the low-cost DIY MIDI kits available on the market and evaluate each of their individual strengths and weaknesses. 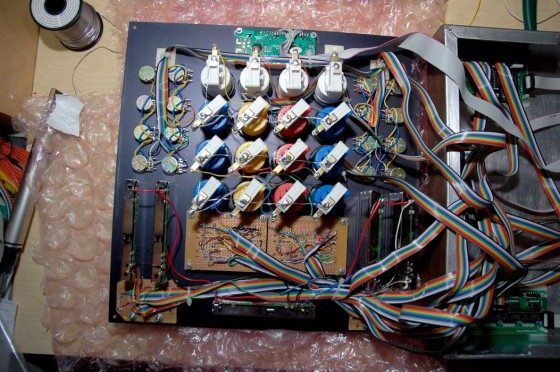 What does it take to make your own controller? Much less than you might think. The image above shows the insides of the custom controller built on the MIDIbox platform, one of the first and most powerful DIY MIDI communities out there. MIDIbox projects, while being very powerful, are unfortunately quite complicated to actually make. As more and more people converge on the topic of hardware modding and hacking, some entrepreneurial spirits have developed much easier kits that do most of the legwork for you. Some of these USB powered MIDI boards can run anywhere from $40-300 — depending on its capabilities — and are relatively simple to set up. There are a few important factors that you could consider when looking at building your own MIDI controller with a DIY MIDI Kit.

Most DIY MIDI kits vary in how complicated they are to set up and how many features they support. Hardcore programmers may find the MIDIbox project up their alley, but building the projects requires extensive experience, testing and patience. On the other hand, more basic kits sacrifice capability in order to reduce the required effort in making your own controller. 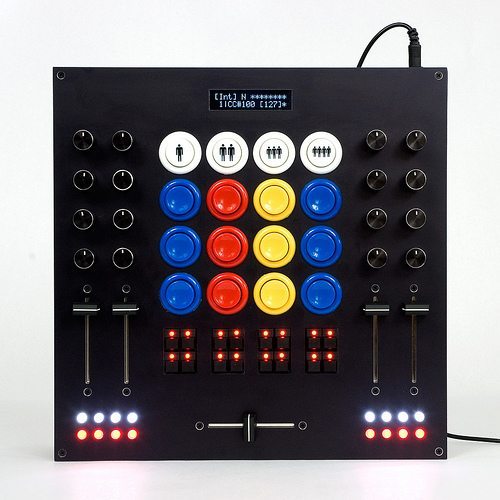 Another important aspect to consider is the use of multiplexers and matrices that lower the restrictions of space and power in a circuit board. These extensions allow you to take advantage of the legwork done in simple kits like Builder DIY, and expand them to have capabilities closer to the more intensive projects like the MIDIbox.  A multiplexer takes multiple inputs and sends them down a single channel and are usually chip based. This allows a PCB to be expanded from a static number of direct connections to multiple inputs per connection. The Midifighter, for example, features 16 direct button connections but can be expanded with latch-and-shift chips that multiply the number of possible digital inputs to over 200. While the controller above was originally created with MIDIbox, the same design could be duplicated much faster today with a Midifighter DIY kit. 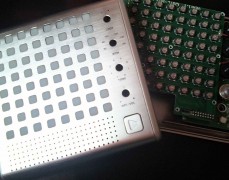 This modding kit turns a Bliptronic 5000 matrix synth into a small Monome. The kit includes a DIY arduino, all the necessary components, and even a port of Monome Serial (Monome mapping software) to complete the transformation from cheesy 80’s sounds to scrolling controller mayhem. While this mod is limited, the Bliptronic’s diminutive design and unsatisfying snappy buttons, it is a good beginner-to-intermediate project especially if you have a Bliptronic on hand. Built by Stray Technologies, the Bliptronic 5000 is $49.99 from Think Geek and the Bliptronome is $69 for the Breadboard kit.

The folks at Livid, responsible for the Block and Ohm controllers, offer a totally modular approach to building your own controller. The USB “Brain” board is small (3.5″ x 4.5″), offers a large number of inputs and LED outs and is easily programmed with an included firmware editor. The keyword here is expansion; the board can handle a total of 179 buttons and 48 LEDs when coupled the matrix boards. Costs can start adding up quickly, however, as the “Brain” board is best suited to the expansion boards sold by Livid, and everything else must be sourced yourself. Because the Builder is modular in design, it takes more time to get off the ground, but has very wide potential for modification. Find it at Livid for $189 for the “Brain” and around $12 for matrices and other modules. 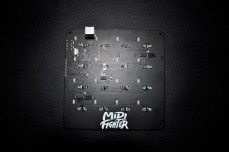 DJ Tech Tools’ entry into the pantheon of DIY MIDI controllers strikes a balance between ease of use and creative potential. A button masher can get started within about 20 minutes from receiving the Midifighter, as it comes with the all components to get started and doesn’t require a middleware editor. Though the board features 4 solder-able analog inputs, an analog multiplexer lets you multiply the possible analog to 16. Those willing to dive even deeper can use switch chips to expand the digital and LED inputs as well. Find it at the store for $125.

In this extremely small board (1.6” x 2.7”), each one of the 32 inputs can be configured for a large assortment of analog, digital and LED components. Hale also make a “linker-board” that, you guessed it, links separate UMC32’s together. The board can send MIDI SysEx commands for controlling other MIDI hardware, but the trade-off is that Windows only software is required to configure the output before you can even get started, and it does not feature a MIDI out as standard. Again, components here must be sourced yourself. Find it at Hale Micro for $89.95.

This board is a rectangular 6.2″ x 1″ monster. This controller board from the German modular synth makers is a bare bones board that, like the Hale Micro UMC32, has cross compatible inputs. It also has 2 MIDI outs, for controlling other MIDI hardware. While offering a lot of I/O, one hangup is that the board does not receive MIDI input for LEDs — like the Midifighter or the Bliptronome — and all components must be sourced. Find it at Doepfer for around $200, includes ribbon cable and 240v power connector.