Has this ever happened to you? You’re ready to drop the set of your life to an eager audience when a technical issue threatens to spoil the evening. Panic stricken, your eyes dart around the room for a sound guy, who of course is absent or non-existent. At this very pivotal moment, the night could be saved by your “Mix Master MacGyver” skills. Most of us have been jerry-rigging turntables and the like since we first popped a penny atop the cartridge of mom’s home stereo and cut up “Sesame Street” records after school. Thusly, I’m sure some of these tips you’ll already know, but if the following information saves just one party, then my job is done. After all, the show must go on. 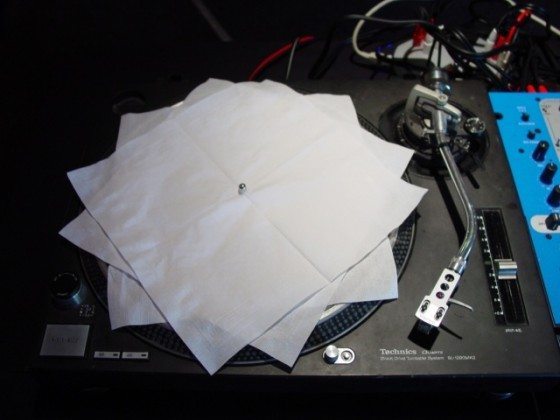 The number one crucial piece of gear that seems to be missing or forgotten has to be slip mats. This one is a simple fix. Push paper bar napkins over the nipple of the turntable, and voila! I’ve heard of everything from doilies to whiskey bags used. Record sleeves or paper of almost any kind can be used in a pinch.

Bad control signal or mono analog signal is often caused by poor contact between the tone arm and cartridge. Licking and sticking, although sometimes effective, can exacerbate the problem in the long run by causing extra corrosion to accrue. Instead of licking, try using a #2 pencil eraser. Remove the cartridge, insert the eraser end of the pencil in the tonearm and twist it back and forth to clean the contacts. Do the same with the contact points on the cartridge. Don’t forget to blow the erasures away. Reattach the cartridge to the tone arm and throw down. 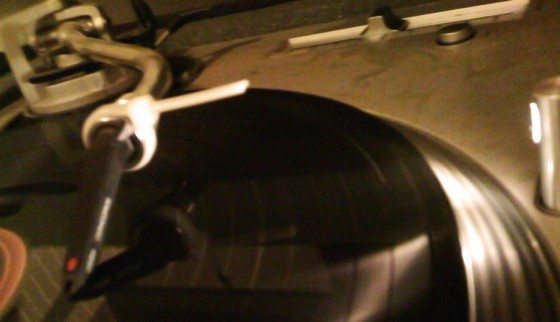 It’s a fact. Accidents happen in dark clubs, especially when alcohol is involved. If the tone arm is fastened, and you attempt a bit too vigorously to place it on the record, the handle and the cartridge may part ways, making it extremely difficult to cue records. Paper clips work well as a fix but better is a small zip tie. Affix the zip tie around the cartridge body and trim to length. 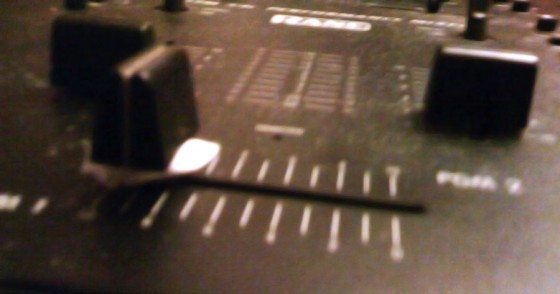 A loose fader can be deadly in a set. Flying faders are the #2 cause of blindness in the club, right after alcohol and stilletos. If a fader easily slides off, take a small piece of napkin and fold it over the top of the fader post then wedge the fader on top. Make sure the piece of napkin is long enough to be pulled out rather than packed inside, which will add to your problems. Also take care not to tweek the fader by pressing too hard. 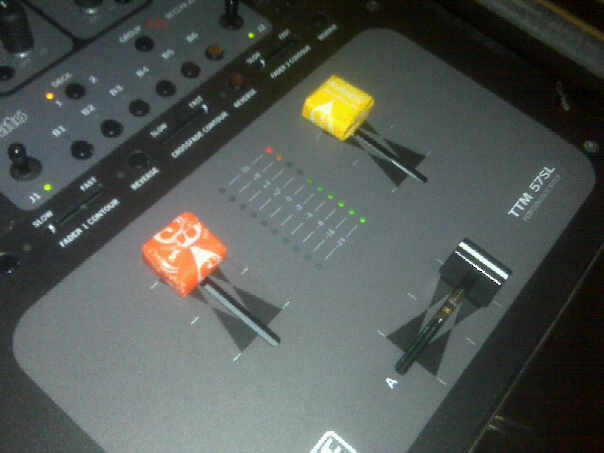 Largely due to the problem mentioned above, I can’t count the number of missing faders I’ve encountered. Some nicked, some no doubt shot across the room during vigorous mixing. You then spend the rest of your set trying not to bloody your fingers. Instead, try this. Starburst candies can be pressed over the bare metal fader tab, providing a comfortable and delicious solution. Just don’t let groupies eat them afterwards, no matter how tempted they may be. 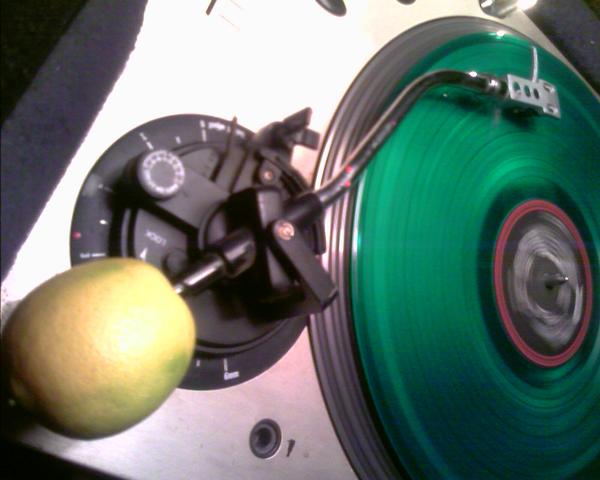 One of my personal high points DJing wasn’t opening for so and so, or headlining such and such club. It was actually at a small bar gig, on a Tuesday night, with a reputation for a janky sound system and DJ booth. Upon inspection of the gear during set up, I was unable to locate one of the turntable’s counterweight. Without this small but critical piece of the tonearm assembly, records will not play. It was the only time I’ve ever encountered this particular problem, but I’m sure it’s happened to others, so I’ll share my fix. A small lime from the bar with a hole poked in the end can be slid back and forth to achieve the proper weight on the record. Not only did the show go on but, it was lemon fresh!!! 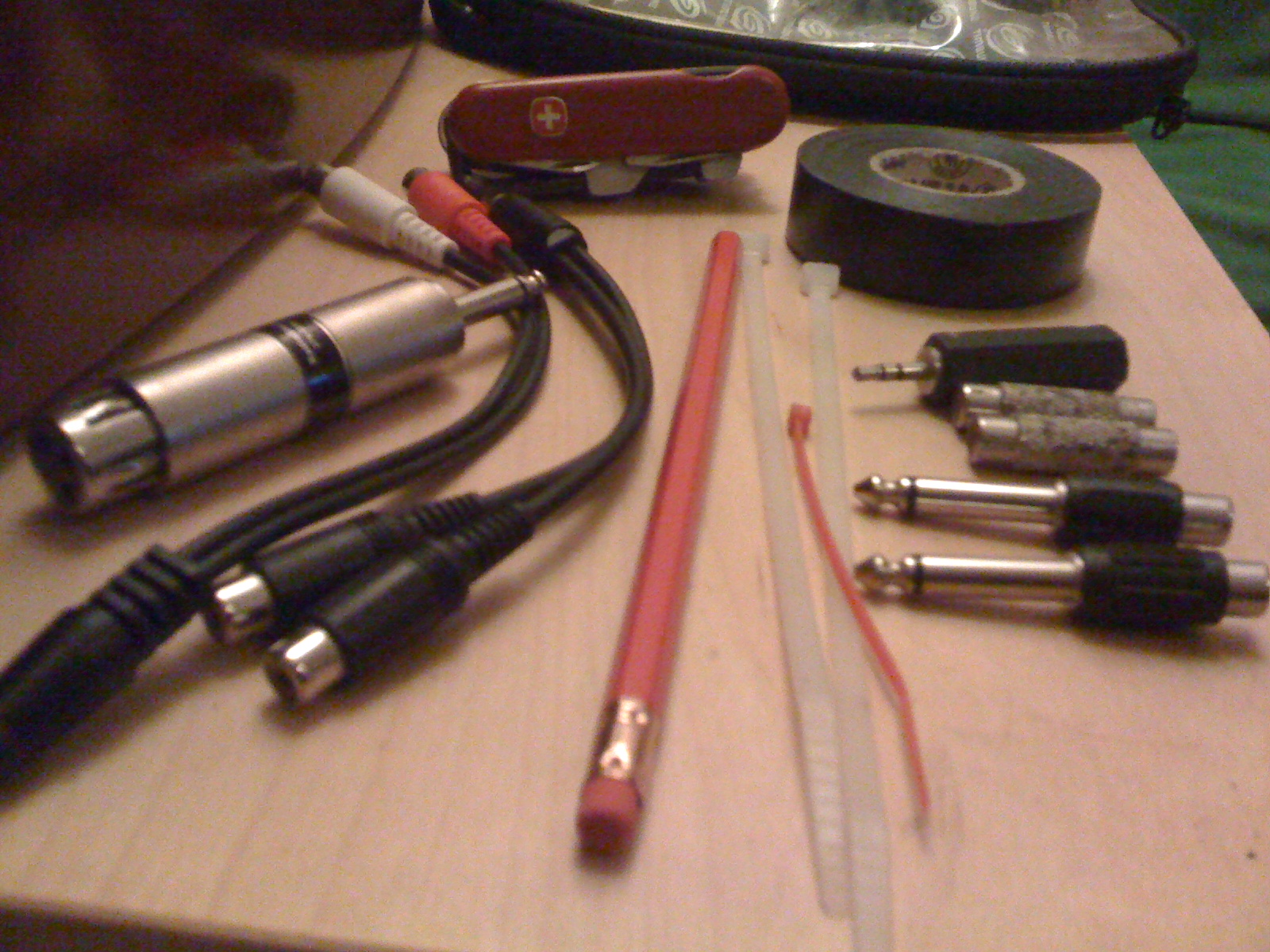 There are a few things that you can include in your bag of tricks that’ll help you out of a fix.  The above is what I carry with me and each item has proven to be well worth carrying along. After all, even MacGyver would have been shit out of luck without his trusty Swiss Army knife. Make sure along with the knowledge you have the tools as well, and you’ll save many a night and hopefully create a more comfortable DJ experience for yourself.

How To Price Your Mobile DJ Services?

Please, Remember the Turntables Too…