You may have to decide whether to fill up your gas tank or fill up your belly far too often these days, but luckily, one area where you still get more for your money than you did 2 years ago is technology. Since the last DJ Tech Tools budget soundcard romp in Feb. 2008, 2 Benjamins now gets you a considerably more impressive array of audio interfaces with which to weave your magical musical tapestry. Whether you spin DVS control discs or rock controllers, you have to get your tunes from the computer to the soundsystem somehow. So because those gallons of milk and 87-octane aren’t getting any cheaper, we went shopping for the best DJ soundcard values, and passed the time savings on to you. 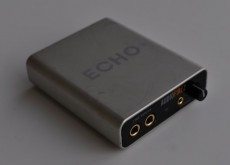 This tiny interface packs a big punch. It’s balanced 1/4″ inputs and outputs provide excellent sound quality, and the 1/8″ headphone output with gain control is extremely loud. Around the back, you get MIDI or digital S/PDIF audio I/O through a combo port, two FireWire 400 ports that provide bus power, and an external power jack for an included adapter. Big sound inside a compact yet rugged aluminum case sum up the AudioFire 2. (See DJ Tech Tools’ previous AudioFire 2 review.)

Although well-suited for musicians, the Saffire 6 USB also specifically caters to digital DJs. Two sets of stereo RCA phone outputs let you split two channels of audio out to DJ mixer inputs, or you can go with balanced 1/4″ TRS outputs for sending straight out to powered speakers. The 1/4″ headphone jack in the front is powerful enough for the club and has independent gain control and a switch for cueing between the two sets of RCA outputs.

Two mic/instrument inputs provide renown Focusrite preamps with optional phantom power, and you get MIDI I/O ports as well. Even if the included Ableton Live Lite 7 is child’s play for you, the bundled Focusrite plug-in suite (compression, reverb, gate, EQ) and Novation Bass Station software synth are a nice bonus.

With it’s heavy-duty metal chassis, the Saffire 6 USB could be your all-in-one DJ/live PA/home studio workhorse.

Along the lines of the Focusrite, the Fast Track Pro also provides 2 sets of stereo RCA phono outputs; a front-panel headphone ouput with plenty of gain, a volume control, and a switch to toggle cueing of the 2 phono outputs; balanced 1/4″ TRS outputs; 2 mic/instrument inputs with switchable phantom power; MIDI I/O; and Ableton Live Lite. Additional features include S/PDIF digital audio I/O, a power switch and 1/4″ TRS inserts for sending out to outboard processors.

While Fast Track Pro’s shell is made of plastic, it doesn’t feel too flimsy, and it’s somewhat smaller and lighter than the Saffire 6 USB. 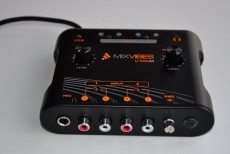 This new offering from MixVibes comes with DVS LE software, a light edition of MixVibes DVS 7. It has two sets of RCA stereo inputs and outputs, switchable from line level or phono level (with grounding). There is also a 1/4″ mic input and 1/8″ headphone output, both with level knobs on top of the unit. This very light and compact soundcard is meant to be a simple and affordable solution for DVS DJs. The undetachable USB cable sends up a warning flag, however, as a damaged cable might require you to replace the entire unit. Also, the output levels were a little lower than we’d prefer.

Another soundcard made most specifically for DVS-slinging DJs, the Audio 4 DJ includes 2 channels of stereo RCA inputs and outputs. Grounding is provided, and the inputs are switchable from phono to line. With its straightforward intentions for the Audio 4 DJ, Native Instruments has focused on simplicity and power. You get loud output from both the headphone and channel outputs, as well as commendable sound quality. Traktor LE comes bundled. 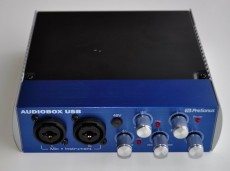 As kind of a middle-ground entry, the AudioBox USB offers a combination of tank-like construction, ease-of-use and flexibility. With its single pair of 1/4″ TRS balanced outputs, 2 mic/instrument inputs with preamps and MIDI I/O, the AudioBox USB may be more suited to bedroom producers, but is also perfectly valid for digital DJs who mix in the box. Its thoroughly robust metal body and knobs score it big points just on road-worthiness alone. And for the production-curious, a nice software bundle includes Presonus’ new Studio One Artist DAW software, 20 Presonus plug-in instruments and effects, and a few gigabytes of assorted other instrument sounds and loops. 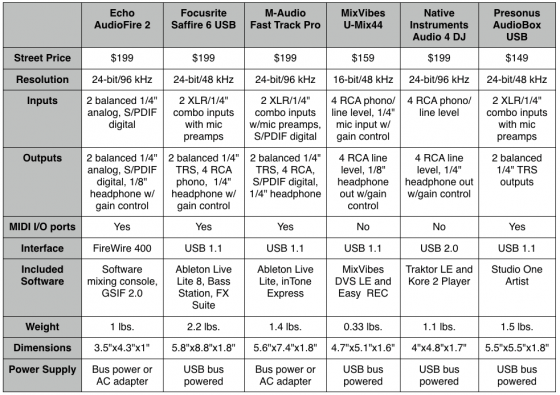 We designed a latency test that would stretch the likely limit of your digital DJing needs. In Traktor Scratch Pro 1.26, the test session included 4 internally mixed decks, each one with key lock turned on and running at -50%. All 4 effects slots were then turned on for each of the decks, and we then adjusted the Audio Latency setting in Preferences down until audible glitching occurred.

The latency values in milliseconds in the following table represent the lowest setting possible before glitching. On a powerful, recent MacBook Pro, the latency differences are negligible, while slightly more variation occurred on an older Dell PC laptop. As comparisons, we also tested the laptops’ internal soundcards and the VCI-300 controller with built-in soundcard.

Differences in the soundcards’ output gain levels were compared on a Rane TTM-57 SL mixer with the Audio 4 DJ providing the mean gain level. 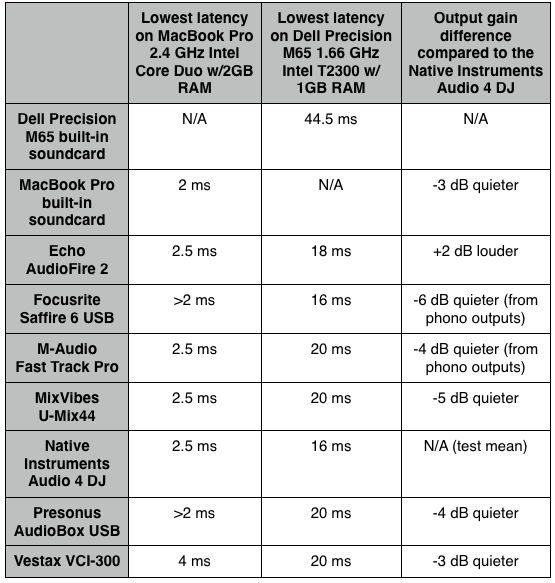 Because sound quality assessments are highly subjective, and the differences at this price range are not extreme, we are sticking mostly to the empirical facts to make our recommendations. However, there are some comments we’d like to make on the sound produced by these audio interfaces.

The U-Mix44 has the lowest audio resolution in the bunch, and its sound is not as big and bassy as many of the others. Its frequency separation and stereo image aren’t as good, resulting in some parts of the music sounding a bit flattened together. The Audiobox USB was better, but still suffered from some tinniness and occasional harshness in the high frequencies, as well as a lack of bass.

The Fast Track Pro and Saffire 6 USB shared similar characteristics, with a full, bassy sound that was big, but not muddy. Individual instrument parts sound crisp, will good frequency separation.

As the loudest card of the bunch, the AudioFire 2 may not have the cleanest sound, but it gives music that elusive “warm” quality that makes it seem more analog, as if you were suddenly listening to a 12-inch rather than a digital file. It also delivers plenty of bass.

Finally, the Audio 4 DJ distributes a nice, all-around transparent sound: not too bright; not too bassy. Its sounds are sharp and distinct between frequency ranges.

Anyone who tells you there’s one ultimate winner to the soundcard debate has got to be a shyster. Also, the products we’ve reviewed here serve some diverse needs, so your personal goals for an audio interface will have to inform your choice.

For DJs using either 2 decks of control vinyl or control CDs, we recommend the Audio 4 DJ for its sweet-spot combination of a rugged yet compact build and high sound quality.

Controllerists who also dabble in music production will want to consider the Saffire 6 USB or the Fast Track Pro, which both offer 2 sets of stereo phono outputs for sending 2 DJ software decks to separate mixer channels and headphone outputs that switch between those 2 outputs for easy cueing. In addition, both those products provide 2 decent mic preamps for audio recording, MIDI I/O and balanced TRS outputs that are ideal for running straight to powered speakers. The choice between these two may come down to whether you want smaller and lighter (Fast Track Pro) or rock-solid build quality (Saffire 6 USB).

You can’t sleep on the AudioFire 2, either. Built like a tank, yet eminently portable, it gives you loud output and great sound quality. It’s a fine choice if you want a FireWire 400 interface, as long as you mix internally, since it has only a single stereo output.

Round Up: Controllers Under $200

Thanks to Ean for all his help with this round-up.