As artists who depend on computers, we put a lot of faith into delicate technology that’s prone to mid-gig problems — especially in a hot club with sweaty partiers running amuck, drink in hand.  In this post we’ll look at five basic steps that you can take to minimize the odds of anything going wrong during your set.

The dance floor is packed.  You’re deep in the groove and fully rocking out.  It’s only you, the music, and the crowd.  Life is good.

Then… disaster strikes.  Your music starts glitching, and not in a good way.  Panicked, you look down at your laptop, only to see a frozen screen.  Within seconds the stuttering turns to deafening silence.  Red-faced, you keep your gaze fixed at the computer as the crowd reacts with a predictable chorus of boos.

This is the worst case, nightmare, shoot-me-now scenario for anyone who performs live with a laptop.  Take it from someone who’s been there; nothing sucks more than having your gear check out during a set.

The good news is that you can minimize the odds of having anything go wrong — even a minor, three-second glitch that throws you off your groove.  Just follow these straightforward steps to a glitch-proof performance:

Watch Out for Your Surroundings

The problem is that when you’re in the middle of a set, it’s easy to lose track of what’s happening around you.  That third Redbull/vodka might be exactly what your enthusiastic fan needs that particular night, but it doesn’t mix so well with your laptop and controllers.  And while the DJ booth or stage might seem like a protected area, there are always those partiers who want to jump up on stage and rock out with you. 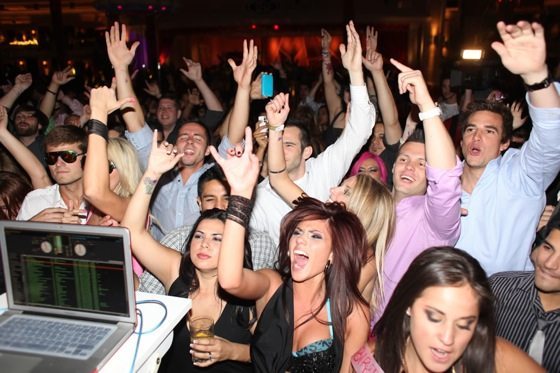 Also find a good place to set your own beverage of choice.  Bass bins are a very bad choice; they might be within arms’ reach, but the vibrations can send your drink crashing to the floor.  Instead, put that liquid courage out of the way, where it won’t easily get knocked over (the floor is a good option). Some DJ booths even have shelves under the main table, which can do admirable double-duty as drink holders.

At just about any venue, you’ll also find a snake’s nest of cables with various three-letter acronymns (USB, RCA, etc.) being strewn in all directions.  It can be a challenge to figure out which cables are attached to your gear… especially in a dark club.  To keep track of your cables, color-code them with electrical tape.  This can be a lifesaver during setup when you’re looking at the back of a mixer and trying to figure out which belong to you.  Getting it right the first time will lessen your chances of anything going haywire mid-set.  Also be ready to use the classic roadie’s trick of using duct tape or gaffer tape to pin your cables to the floor, so they don’t tripped over or knocked around.  In some cases you can even tape the cables to the side of the wall or DJ booth to get them completely out of the way.

Put Your Laptop in the Comfort Zone

Most music venues are chaotic environments; they’re hot and sweaty, with intense vibrations from the bass hammering your ears and your gear.  Here at DJTechTools we’re big fans of anything that can cushion your laptop from glitch-inducing heat and vibration.  Whether it’s a laptop stand or a product like cool feet doing the job, always be sure to protect your machine from the clubby elements.  In a jam, you can even use your laptop bag…just make sure there’s enough air flow underneath to keep the electronics from overheating. There have been reported instances of vibration causing total device failures so you may want to bring a foam cushion as a back up.

Some third-world countries have more reliable electrical systems than your average club.  As a precaution, always bring your own surge protector/power strip and extension cord.  Also fully charge your laptop before the show.  This way, if your adaptor doesn’t work at the gig, you can turn down the brightness of your screen and have at least have 45-60 minutes to jam.

One of the most common causes of audio hiccups is a sudden and unexpected drain on your CPU’s resources.  A fresh OS that you use only for your DJ’ing/performance software won’t be exposed to these problems. It’s a fresh, virgin landscape in which you can have free reign — no worries about viruses, nagware, or system conflicts.

The internet is filled with useful info on how to dual-boot your OS of choice.  A simple guide for Windows XP users can be found here.  If you don’t have the ability to set up a dual-boot, at the very least optimize your system to maximize available CPU/memory and minimize the odds of a glitch.

What would happen to your set if a USB cable was suddenly yanked out, or if one of your MIDI controllers suddenly lost power?  Would your system glitch or freeze, or could you keep your set running smoothly?  Knowing in advance will help you be better prepared if/when something unexpected happens. If you use a USB hub, also make sure that it’s powered; search the laptop DJ forums and you’ll find a scary number of artists who had problems as a result of using unpowered hubs.

Finally, as a general rule of thumb, it’s also a good idea to put your set on “lockdown” a few days before your gig.  Whether you’re using Serato, Tracktor, Ableton, or an Atari program from 1986, last-minute changes can introduce last-minute chaos.  Finalizing a live set in Ableton a few weeks ago, I somehow managed to instantly erase all my MIDI mappings by simply dragging in a new track.  Always, always have a stable set saved and ready to go.  And make sure that the software version you’re using is solid as the proverbial brick shithouse.

Glitches and mid-set meltdowns can happen to even the most established acts.  Last year Gui Boratto was rocking a set at Beta, Beatport’s Denver club, when someone knocked a drink on his mixer.  Set temporarily aborted.  The same thing happened to Infected Mushroom a few years back, stopping thousands of dancers dead in their tracks.  Over the past few months Glitch Mob had a string of mid-set issues, most likely due to software instability.  It can happen to anyone — but the odds are reduced in a big way once you get a grip on the possible things that can go wrong.

One last point, in case all this worst-case-scenario stuff has you stressed out.  As long as there isn’t deafening silence for several minutes, most crowds will forgive even the most obvious of glitches. So if the worst-case scenario does rear its ugly head, be sure to have a CDJ or iPod ready to go. Keep the crowd dancing and you’ll always live to fight another day.

Kent Barton is a Denver-based live electronica artist. He produces and performs as SEVEN7H WAVE.