The boys from Auckland are notoriously cheeky fellows and love to throw ‘easter eggs’ into their software for a good laugh. One of my favorites was the addition of pong to Serato Scratch and several other hidden features that required a bit of trickery to unlock. Sticking to this theme, there are also a few nice easter eggs in Itch that we will uncover in this article, along with an answer to the pressing question: “How can I midi-assign a controller in a software that does not support it?”

DJTechTools first introduced a super filter in controller land on our VCI-100SE and it was subsequently built right into Traktor. A super-handy tool, the super filter is a high pass and low pass filter combined in one knob — turn the knob to the right to cut the bass, and turn it to the left to cut the highs. Serato allows you to convert your bass EQ on the VCI-300 (and possibly other hardware) into a super filter by following these simple steps:

Twist the bass and treble knobs from 0-100% like a madman until a little message pops up on your screen.

Tired of trainspotters ripping off that super rare remix that you ripped off your buddy, who ripped it off from hypem, which took it from a blog, which took it from the artist? Then fight back against the injustice and enable DJ AM MODE! This easter egg also exists in Serato Scratch and basically hides the track listing from peering eyes. 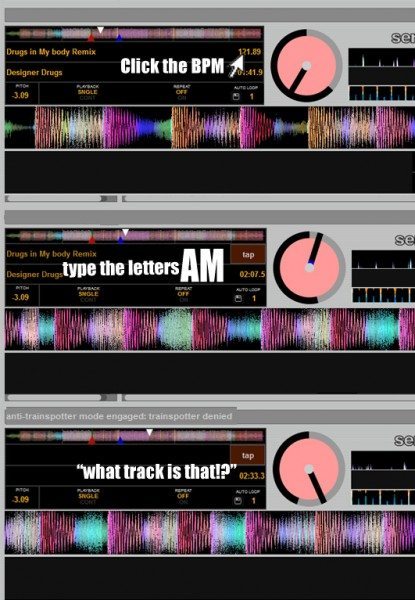 Our very own Pilmat turned heads last week when he claimed to have mapped external controllers (like the midi-fighter) to Itch, which only supports “approved” (translation-license fees paid) controllers. His secret? Terribly simple. He used Novation’s auto map software to convert midi signals into hotkeys and YES — you’re thinking ahead — Itch does support custom mapping of hotkeys. Bingo. Houston, we have lift-off.

To be honest, this inclusion is a bit of a tease. Phil is working on a complete article on how to pull off this trick using freeware midi-to-hotkey translation software and a full video walkthrough, which he will post on DJTechTools next week. In the mean time, keep mashing your buttons and twiddling those knobs. This is Ean von GoldenBurger signing off from Shuttle TechTools.

PS. Big ups to Steve Alois who provided the information for this article and the rad graphics explaining these tips!

New Modular DJ Software: The One