The long awaited arrival of A&H’s four-channel midi mixer has brought about its share of both criticism and praise. Boasting some great specs, the first version of Serato Itch with four decks, and full midi support for use in any other software, it seems to have it all. But beyond the hype lies the end user – you. The DJTT team cut through the fluff and put the Xone:DX through its paces to see what it can do.

THE GOOD: An extremely well-built midi controller with a four-channel mixer and dual banks for effects control. It also features two dual-layer virtual decks that employ different colors to easily identify which you are working on. The Xone:DX comes with a four-deck version of Serato Itch and full midi output in multiple channels for mapping in the software of your choosing. A powerful, high quality 20-channel sound card with phono and mic pre-amps complete the unit to give a complete, all-in-one package.

THE BAD: The lack of touch-sensitive jog wheels and midi-only mixer section (it is not an analogue mixer) could limit the allure of the unit to some. The small buttons are playable but don’t have great tactile feel. The unit is quite dark and the LED feedback does not shed a lot of light, so working in low-light conditions will require additional lighting. The relatively high price may put it out of reach of many of its target customers. Well built but very heavy, this might be reaching the boundaries of portability.

THE BOTTOM LINE: A compact unit with ample controls and a fantastic sound card. The dedicated four-channel mixing section and creative solution for easy deck orientation provide a lot of allure for a more conventional DJ, while the lack of touch sensitive jog wheels may alienate the controllerist or occasional scratcher.  However, with its quality construction and ability to fully midi-map to the software of your choice, the creative and long-term possibilities are limited only by the user’s imagination. 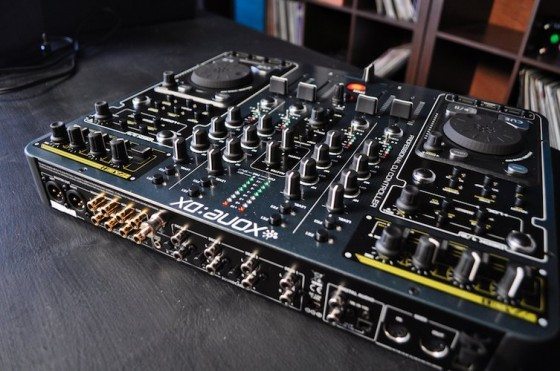 Aesthetically appealing for its understated color scheme, the metallic dark grey top of the Xone:DX has an unfortunate semi gloss finish that is prone to reflect a lot of light. In low-light conditions, finding your way around the controls can be an issue.

The feel of the faders is light yet firm, akin to a stock Xfader on a VCI-100 rather than a Ecler Eternal fader (which I would describe as light and free). The pots and encoders are firm with strong detents. The buttons are all smooth in action, but are rather long in travel and tiny compared even to a vci-100 buttons. The transport buttons are firm and positive with a very short throw. You will immediately notice that the pitch adjustment is not a slider, but a rotary encoder. This is a push action, two-midi-note encoder (as are all the other encoders) that is intended to be two stage – course and fine – and is mapped as such in Itch.

Ergonomically, the layout suits my hand size (medium to small) but those with thick fingers could find it cramped, particularly because the right-most effect control, an encoder, is very close to the third pot. 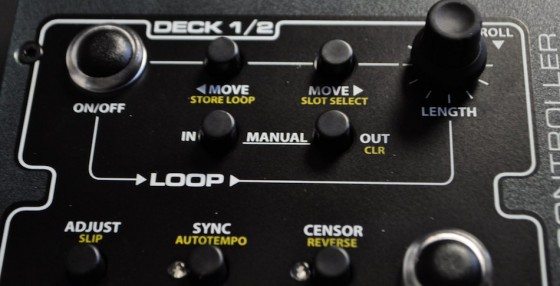 The rest of the controls are well spaced and fit well together. The jog wheels are really small and are not touch sensitive. They are very smooth but have enough resistance so that they will not start turning when subject to heavy beats.

Construction is solid. A metal case with plastic corner protectors and fairly large feet give the unit a sturdy feel. It’s a little larger than a VCI-300 and not offensively thick. Weight-wise, it is light enough to transport in a bag but you would not like to have it slung across your shoulder for hours. So far, the only bag available that fits and protects it is the Mono 365.

The controller has to be powered with the included power supply (12V, 1.25A) and cannot  be run from just the USB. There is no power switch, which means that there will be an audio spike when you plug in the unit if the speakers are on. Make sure the amp connected to the output is off when connecting the power (a big POP through my speakers!). Better still, plug in the power supply before connecting anything else.

The USB connection does double duty on the Xone:DX for both midi and audio signals. I would highly recommend a good quality, short USB 2.0 cable.

The back panel has the bulk of the audio connects, 5-pin midi in and out and the USB. The audio ins of channels 3/4 (Deck 2) and 5/6 (Deck 3) include phono pre-amps for turntables, and there is also a ground stud. A direct input 1/8” jack on the back will port audio to the master outs (this bypasses the soundcard, so no volume control from the DX).  This is in the event of a computer or soundcard crash.  If either happens, turn all the mixer controls to minimum and press play on your MP3 player connected to the input port.

All audio connections made to the back panel are converted to digital and fed back into the software. Remember, this is not an analogue mixer. This means that your audio device is connected to the soundcard must be used to mix internally in your software. In case you were wondering, the ‘THRU’ on the headphone cue buttons is an Itch command that is equivalent to Traktor’s ‘Audio Through’.

The front panel has the mic input and controls: these are an XLR jack; EQ with high- and low-frequency adjustments; and the mic level. The mic is routed through audio inputs 7/8 (Deck 4) and is selectable from the rear panel. The mic signal has to be sent through the software just like all the audio inputs, the same as the connection made to Deck 4.

Working with the DX in Traktor or Itch is a pleasant experience. I like the Itch workflow and find the controls intuitively laid out. Traktor mappings available exploit the native Itch markings as much as is practical, but some adaptation is required. 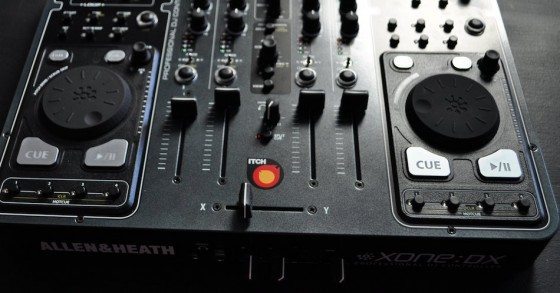 The mixer section is clean, and almost everything you typically need is there for you. Each fader has a nice long throw for keeping the mix levels in order, and the individual channel and master LEDs let you know what’s going on without having to stare at your computer.  Traktor users may miss a dedicated the filter knob, but there are alternatives in some mappings that use the low frequency EQ knob for this function. The Xfader can be set-up to go from any of the four decks, or multiples there of, to any other with the X-Y select switch (Traktor mappings may exploit this switch for other uses, so the functionality is mapping-dependent).

The virtual decks are both dual-layer with dedicated layer transport buttons. They are identified by color, so the LEDs are green on layer 1 and red on layer 2 – a nice touch that is very easy to work with. The deck is the whole side minus the effects section on the top corners (which are on the same midi channel as the mixer).  Therefore the loop section and specific deck controls, which have a nice shift button, are all on a layer that has its own dedicated midi channel. This means that you can map one layer, copy it to a new midi device, change the deck and midi channel and then have each layer perform identical tasks. LED feedback is excellent for the transport and pitch controls, but a bit weak in the loop section where only the on button is backlit. 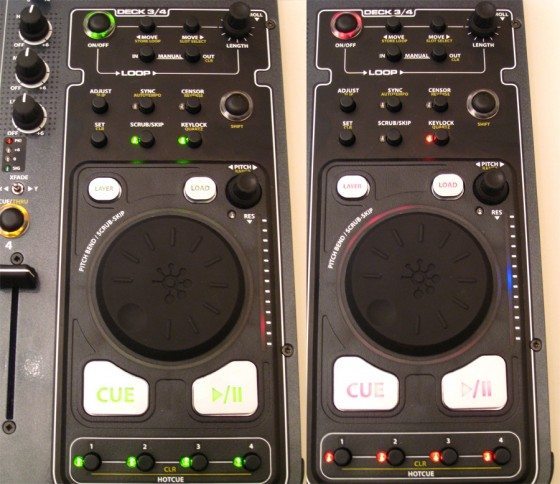 The physical controls on the virtual decks are spacious, owing to the small jog wheel size. The hot cue buttons are small and have long travel, unlike arcade buttons. They are, however, playable with a small adaptation period, but their size will not allow you to do multi-finger presses. So doing those quick triplets or even 1/16th notes that are possible with bigger buttons is not going to happen. These hot cue buttons do, however, have individual LED feedback. 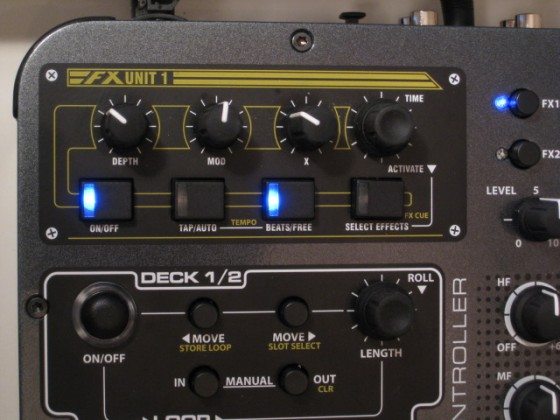 The effects decks are tailored for Itch’s effects layout, but are equally good for Traktor, however you will need to get used to having an encoder for the right-most knob.  The on/off buttons have blue LEDs to show their state. For use in Itch, the top of each column of controls has an FX1 and FX2 button (also with blue LED feedback) to assign each effect deck to a channel. These can take on different uses for assigning effects within Traktor.

Pumping Out the dBs

The soundcard packs a serious wallop! Both the volume and quality of sound is quite impressive. Using the balanced outs to my speakers produces such strong lows and mids that I could return to the speaker manufacturer’s base set-up and enjoy a full spectrum of audio (I had the highs slightly lowered to get an even balance). The unbalanced output is just as strong, and you should have no problems getting through to the crowd with either hook up.

The three pots down the centre of the mixer are VCAs for controlling the soundcard, with the master and booth pots also sending midi data. They provide ample range and fine tuning adjustments and the headphone amp is quite powerful (hey, it goes to 11!) with enough volume to make your ears ring if you wear the cans too long.

The mic pre-amp is not very strong with my Sure 58 attached, requiring the level and gain both to be cranked to get decent audio levels. Don’t be afraid to add some EQ gain too to get the volume right . 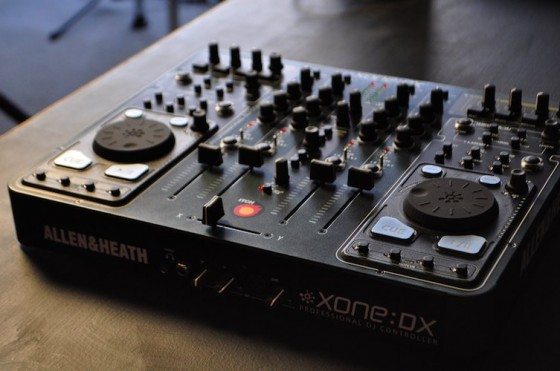 As a powerful DJ midi mixer with a kick-ass integrated soundcard, there is nothing in the DX’s class that has all the controls and a four deck mixer (although rumors have it something may be coming out like this for the Traktor crowd later this year).  Itch DJs that were looking for 4 decks with on-board effects will be very pleased, with the only drawback being weak scratching.

When I saw the first videos of the DX, I was excited about the potential it set forth. After waiting patiently for it to become available and now having worked with it, I am even more excited about what I can do with it. Every time I set out on a mix I feel enticed to try more and more different ways to ply my craft. The fluid layout and tactile controls make you feel attached to your set and in full control of it. I look forward to exploring all that people will dream up for the DX and to the years of service it is sure to provide me.

Bringing Producer Tools to the Masses